Ian and Teresa Moss share their passion and obsession for salvias, and share their favourites from their collection of over 180 varieties - 14 June 2020

We have to admit it, we are obsessed with salvias. It's a relatively new thing for us; when we ran our nursery (where we grew hardy and unusual perennials, specialising in hardy geraniums, which we still love), we had relatively few in our range. Not long before we retired from our nursery, a few of the new (and now well-known) hybrids, such as  'Amistad' and 'Wendy's Wish' became available and we added them to our range. Then we met Colin Roberts (Head Gardener at Adwell House, which hosts one of our September fairs), who is a fellow salviaholic and who kindly gave us a selection of interesting varieties that started our collection, and we were hooked. Since retiring from our nursery business, we have continued to collect salvias as a retirement hobby and now have over 180 varieties.

The genus Salvia comprises a very large family of nearly 1000 species, and examples are found in all continents except Australasia. On top of this, there are many selected forms and hybrids in cultivation, so there is a huge range of options from which to choose. As you might imagine, with such a wide geographical spread, there are salvias of every size and shape and to suit most garden environments, and the family includes annuals, herbaceous perennials and shrubs.

With such a huge selection to choose from, we can only scratch the surface in an article like this, but hopefully we can show you the range of possibilities that salvias can offer.

Many of you will be familiar with the wide range of these small, shrubby salvias that are now available, with perhaps the most well-known being the ubiquitous Salvia microphylla 'Hot Lips' (definitely a 'Marmite' plant!) The vast majority are selections or hybrids of Salvia microphylla, S. greggii or S. x jamensis (which is a cross of microphylla x greggii). Height and spread can vary from 30cm to 100cm up and across depending on the variety.There is now a huge selection of these now available, in every colour except green, and including an increasing range of bicolours. There are too many to cover here properly, but we are creating a photo gallery of all the ones that we have at our website at https://hardyandunusualplants.wordpress.com/ so please go and take a look. In truth, there are probably too many being named now and sometimes the differences in the new varieties, compared to the old, can be charitably described as 'subtle'. 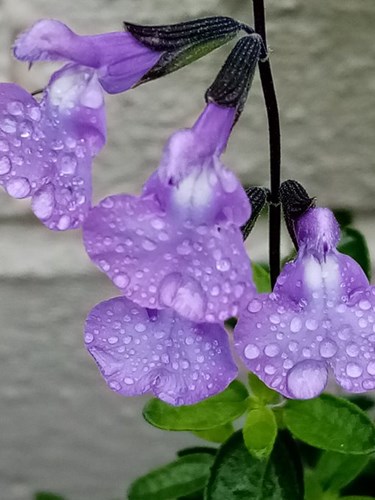 People ask us a lot about hardiness of these salvias; we find them generally to cope down to about -10C (sometimes lower) as long as they are planted in well-drained soil; those grown in pots should be placed in a more sheltered location over winter as the roots are more vulnerable in a container. The other important factor is to avoid hard pruning these plants in the autumn or early winter - just cut off faded flowers but otherwise wait until spring, when you see new shoots forming, to carry out any major pruning. These wonderful salvia are very long-flowering, from May until the first frosts, have aromatic foliage (usually blackcurrant scented) and are great bee plants. They are best in full sun, and benefit from having a trim in early July (known as the 'Hampton Hack'), where you cut back by about a third to keep the plant well shaped and to stimulate strong flowering in the second half of the summer.

For this article we wanted to highlight a couple of less well-known Mexican salvias. First is the very beautiful Salvia lycoides, from Northern Mexico, which is lower growing to around 30-40cm and has the most wonderful blue flowers. Again this has proved tough and hardy for us, and will seed around a little (but may hybridise with other salvias in the neighbourhood). 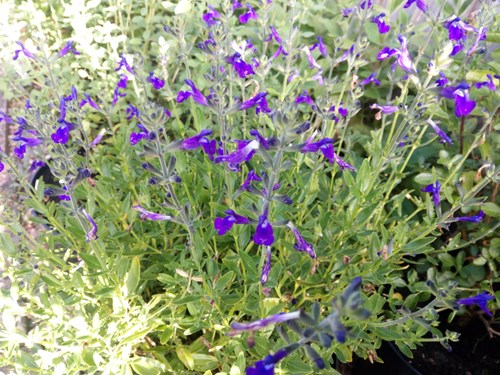 Also with blue flowers, but with superb silver-grey foliage, is S. chamaedryoides var. isochroma. This is quite a sprawling Salvia, but is so beautiful, and grows to about 30cm tall as a spreading shrub. There is a green-leaved form, which some experts now believe to be a natural hybrid. This will also hybridise with other salvias and has been one parent of some great named varieties such as S. 'Christine Yeo' and S. 'Valerie'. 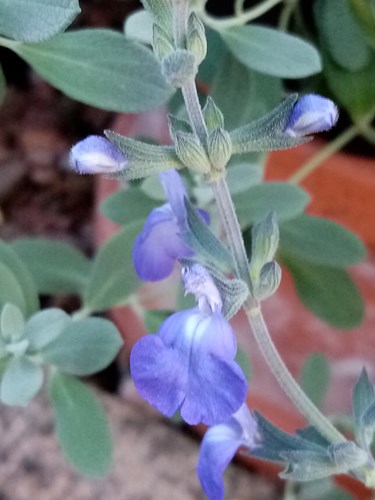 Some of the most interesting and unusual salvias come from Africa, which has fewer native species than the Americas but many are very unique. Amongst those that we grow is Salvia aurea (syn. S. africana lutea). This has superb silver-grey. almost succulent-like foliage, and the most amazing rusty orange flowers, usually in late Spring to early summer. We've yet to risk this outside over winter ourselves, but other salvia enthusiasts tell us that it is surprisingly hardy (to -5 or -6C) in well-drained soil. 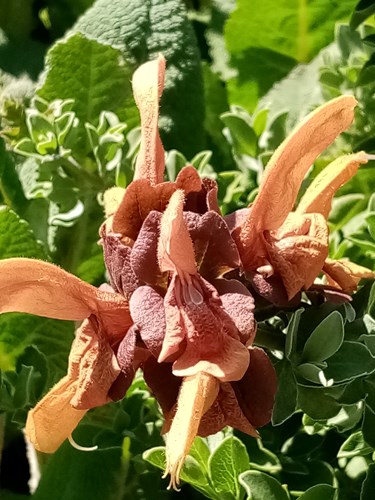 Another excellent African salvia is Salvia namaensis, from South Africa. This has wonderful fresh green, aromatic pinnate foliage, almost looking fern-like in appearance, and is covered though the summer is small but plentiful pale blue flowers. This one is best treated as tender, and can be propagated from cuttings and also seed. 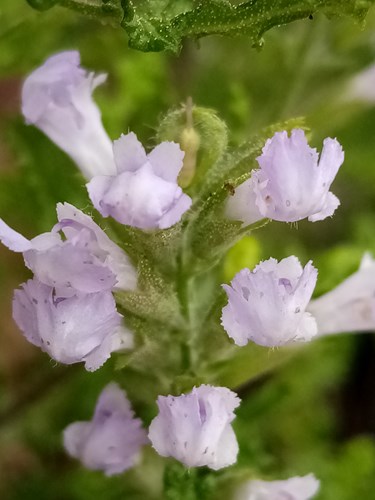 The final choice in this section is Salvia scabra, again from South Africa. This is a small, compact salvia that in the garden behaves as an herbaceous perennial, reshooting from rootstock in the spring, and throughout summer is covered in lilac-pink flowers. It is also one parent of the excellent hybrid S. 'African Sky', a cross with another African species, S. chamelaeagnea. A larger plant at around 3-4ft, this has beautiful lavender blue flowers and again behaves as an herbaceous perennial for us in Somerset. 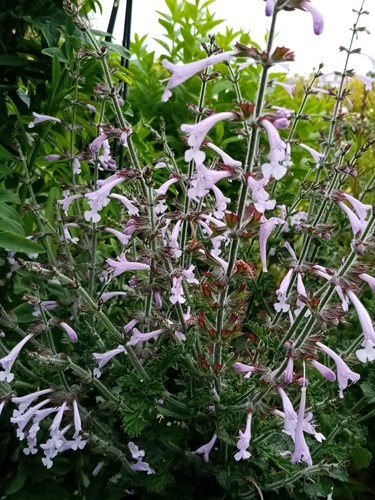 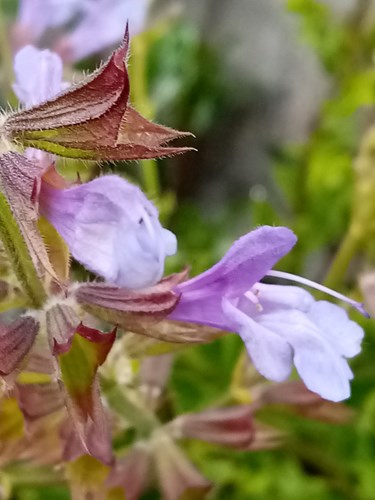 Salvias from Central and South America

Some of the most truly stunning an beautiful salvias come from Central and South America. Many of the species (from which many selections and hybrids have been made) are plants from the cloud forests, and unlike most of the salvias mentioned above will prefer dappled shade to full sun, and although they need good drainage they will not want to dry out in the summer. These are mostly not hardy, but they generally root very easily from cuttings and so a few small plants in a frost free greenhouse, conservatory or even kitchen windowsill will allow you to keep a good selection from one year to the next. Many American salvias have evolved to be pollinated by hummingbirds rather than bees, and the showiness and colour range of the flowers reflects this. Here's a tiny selection of our favourites:

A truly stunning selection of a Mexican species (no, really!) the foliage is quite beautiful. The flower buds themselves are sperb in their own right, a beautiful lime-green colour, followed by the lovely blue flowers. Best in partial shade in fairly rich soil, and flowers late summer t around 120-150cm. Highly recommended. The photo below also has a flower stem from S. discolor getting in on the act! 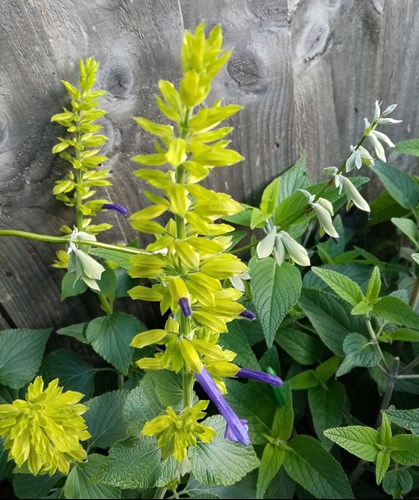 Also from Mexico, this is a very showy pink-flowered salvia, making about 4-5ft in the season. This one will do well in both sun or part shade as long as it doesn't completely dry out. Definitely in our top ten! 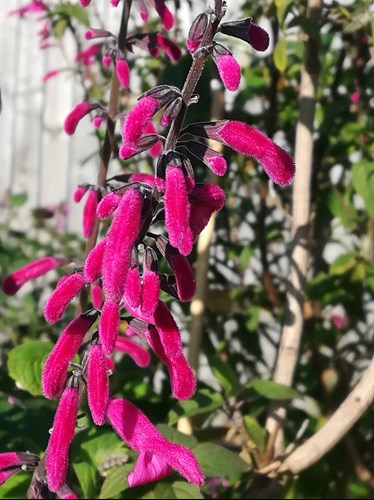 Many will be familiar with the bedding forms of Salvia splendens,which are the result of decades of breeding, but the original species (from Brazil) is a much taller plant and there are wonderful selections of this tender perennial that are closer in form to the species, The one we grow, 'Uli' is truly spectacular, flowering in late summer at around 100cm tall with large burgundy-red flowers. It is definitely best in a sheltered spot in part shade, but is well worth the effort. 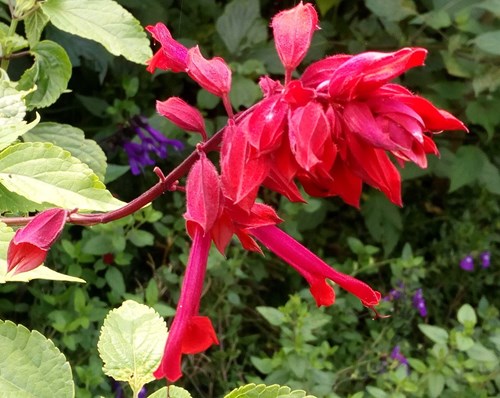 Another Mexican salvia, we cannot recommend this highly enough. Best in good soil in full sun or part shade, this also makes a great container plant to aorund 120cm tall. Everything about this plant is fantastic - the bright green foliage, the superb bicolor flowers and the contrasting calyces. Another top ten salvia for us! 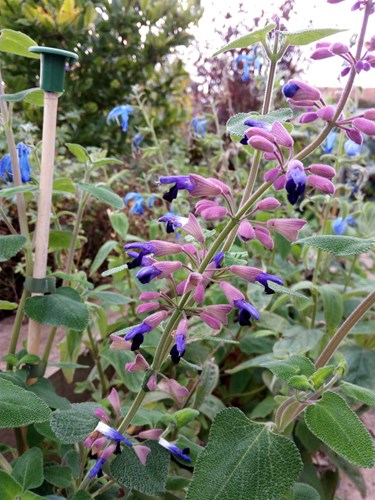 We've saved the best until last. This amazing plant will grow to about 3-4m in the wild (Brazil and Peru) and is a lax shrub, needing the support of an obelisk or a stake. Again best in partial shade in good soil, it has the largest flowers of any salvia, with long, 15cm pendant red flowers that are absolutley gorgeous. Grow it in a sheltered spot where it isn't going to be knocked about by strong winds, and you'll not regret it!

We could go on and on, and haven't even touched on the hardier salvias from Argentina, drought lovers from Europe and the Middle East, and superb woodland salvias from Asia. We'll save these for another article!

Finally, a word about overwintering tender salvias. People often feel nervous about taking cuttings and overwintering tender plants, but it couldn't be easier and you don't need a lot of space. We take most of our cuttings as softwood cuttings throughout the summer, and the vast majority root extremely easily. We actually root all of ours in water, just in small glass jars or shot glasses. Most root within 2 weeks, and can then be potted up for overwintering. We have a LOT of plants that we have to overwinter, but we get most into a 12ft x 8ft greenhouse; a small collection for a non-enthusiast would not need much space and could even be accommodated on a kitchen windowsill. So don't be put off growing tender salvias - they are easy to keep going from one year to the next and are well worth the effort!

Ian and Teresa Moss are retired nursery owners and obsessive compulsive gardens, and also organisers of Rare Plant Fairs. Although they propagate salvias primarily for their own collection, they do sell surplus plants through Rare Plant Fairs and (this year) for local delivery or collection in Somerset. Full details and availability lists can be found on their website.