Growing up in Cornwall everyone had fuchsia in their gardens. The many different varieties were a staple at the back of the garden border. But it was not until we were semi-retired we began to explore the world  of species fuchsia, and where they came from, we try to collect only hardy species fuchsia but some are so odd in habit or beautiful to look at they just arrive in the greenhouse!

Species fuchsia are found in the wild in a limited number of countries from Central America down to Terra del Fuego across to Tahiti and New Zealand. There are over 100 known species found across mountainous areas and edges of rain forest. They come in all shapes and sizes, some hardy, some not.

The fuchsia that we see on the west coast of Ireland, Wales and Cornwall originate from South America. Father Pierre Plumier, an explorer traveling in the early 1700’s was hunting for plants that produce quinine. He found a ‘new’ plant, which he brought back to Europe and named after Leonard Fuchs, a botanist. It is from this magellanica strain that the hardiness of many of our modern hybrids have come from. By the 1820’a nurserymen had realised the potential of these new plants and started breeding new varieties some of the earliest being ‘Thilco’ and ‘Dr. Forster’.

The New Zealand fuchsia are quite different from the accepted view of fuchsia. Often the flowers appear on old wood before the leaves in spring. Fuchsia excorticatia, found by John Forster in 1776, does just this.  In New Zealand it can grow up to 12 feet. In England, in our garden it is more likely to be five feet. The strange flowers have green sepals which turn purple and the corolla is purplish-black. The pollen on the stamen is bright blue. The seed pods formed after flowering are the size of large peas and bronze in colour. The foliage is a distinct bronze colour with a silvery colour underneath. 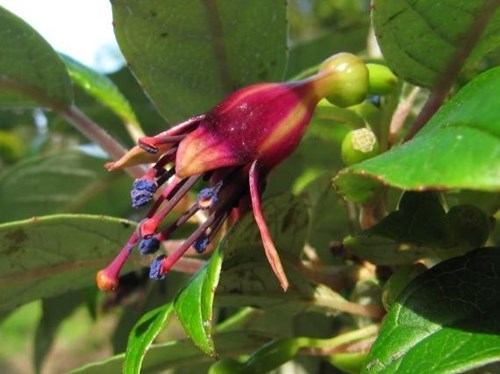 Fuchsia procumbens is a trailing species, its small heart shaped green leaves form a good foil to the upward facing flowers. These have a greenish yellow sepals with no corolla and the stamen carry blue pollen. The seed pod formed after flowering are black and can be the size of damsons. It can make an interesting hanging basket. 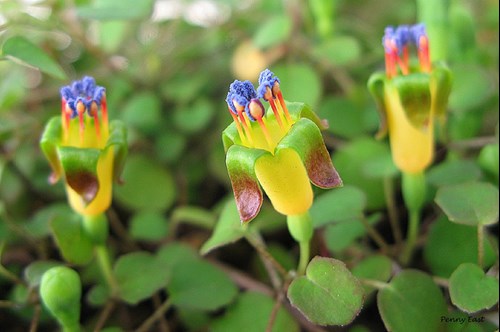 Fuchsia colensoi was found by Joseph Hooker in 1867 and is a rather untidy scrambling plant. It is quite plain until it produces the bell like green and black flowers which can hang in profusion on old wood. All of these New Zealand fuchsia grow in any soil which is moist but drains in semi shade. The climbers will need support. We have grown them in our garden in Cheshire through some very cold winters. Fuchsia are more successful if planted quite deep in the ground rather than kept in pots. In pots, the roots are vulnerable, and should be treated as non-hardy and protected.

Article and all photos copyright the author.