Danny Johnson, from Hanham Court, introduces these wonderful gardens that are new to our programme this year, and how they evolve through the seasons - 02 June 2017

Not so far away from the madding crowds of Bristol & Bath, lies Hanham Court Gardens. Hidden away in a far rural corner of suburbia, among the fields, is a narrow, winding lane that leads you to this unexpectedly rural manor. Nothing about Hanham Court Gardens is ‘expected’ really, from its topography to its history and, most unexpectedly of all, its gardens. These gardens are now possibly Hanham Court’s most famous feature having been voted ‘No.1 Dreamy Garden’ by Gardens Illustrated in 2011, and the gardens have always tried to live up to its reputation since.

It is hard to believe when you walk amongst Hanham’s towering Yew and folly arches that when the garden designers Isabel and Julian Bannerman moved to Hanham Court in 1993 there was simply nothing more than grass, leylandii, brambles, and an awful lot of potential. The gardens were literally a blank canvas, the lawn stretched from the Tudor entrance gates to the end of the ha-ha wall, and from the orchard up to the front door.

Hanham Court, 1993, After Clearing the Garden and Laying Out the Lawn (Bannerman Design Archive)

Sympathetic with the house and its landscape it is hard to believe that next year will mark 25 years since work began on laying out the gardens as we know them today. This is Hanham Court Garden’s best and worst kept secret.

For nearly twenty years Isabel and Julian Bannerman called Hanham Court home, raising their three sons here and making it the epicentre of their design career. The gardens at Hanham were very much Isabel and Julian’s laboratory, a playground for testing their ideas and imagination, the good ideas were kept and the not-so-good  were swiftly re-planted with something better or more in keeping with the gardens ethos, until eventually they found the perfect fit for Hanham Court. There is no set formula or planting plan to the gardens at Hanham Court; they were and still are simply lived in and lived with. However, don’t be under the misconception that these gardens were simply thrown together or came into being through a series of fortuitous design errors, Julian and Isabel carefully and considerately developed a garden based on structure, colour and most importantly for them scent, a winning combination.

After significant restoration by Richard and Julia Boissevain and their garden team throughout 2015 and 2016 the gardens have now regained the impact that had been lost since the Bannermans sold the house and garden in 2012, and we are delighted to start welcoming visitors to see the team’s labour of love, and enjoy this combination of structure, scent and colour throughout a number of events each year. Come with us now as we take you through a colourful and scented year at Hanham Court Gardens.

In spring the Daphne odora aureamarginata and Daphne retusa teases through arches and along borders in the formal garden, and into the Dell or Woodland Garden where you can find, or rather smell, the soft scent of the Witch hazels, and provided they have not been browned by frost or beaten by the unpredictable weather the delicate perfumes of the many Magnolias. M. 'Wada’s Memory’ and M. ‘Wilsonii’ are two of the more obvious scented varieties, and not bad on the eye either. Those of us slightly closer to the ground will enjoy the Galanthus ‘S. Arnott’ with its soft honey perfume, this and nearly forty other varieties that carpet the Dell from early spring, giving way to crowds of Narcissus poeticus in March. 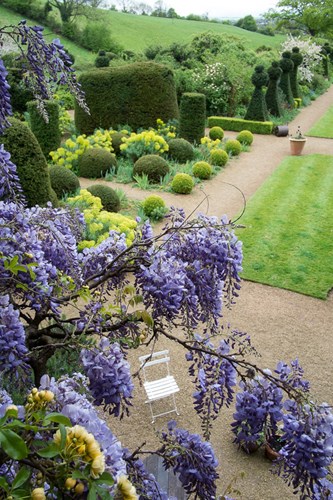 Like a watercolour painting the garden’s pallet subtly shifts and changes as the season’s progress from the brilliant whites and soft pinks of snowdrops, magnolia and Fritillaria meleagris in early spring, into blues, mauves and purples in late spring/ early summer with an abundance of Camassia, lilacs and the Iris pallida 'Pallida’ shooting through the gravel. My two favourites in this part of the season are the Wisteria (W. floribunda macrobotrys), for sheer flamboyance – its blooms drape over the house and cascade down like a waterfall in mauve, intertwined with the small yellow Rosa banksiae ‘Lutea’, their combined beauty and  scent punctuate the air and envelope the house. My other favourite is the tiny shoots of Eryngium bourgatii 'Picos Blue' that begin to peek through and mingle with the Iris among the gravel, topiary box, yew balls and lush Euphorbia characias 'Wulfenii'. By the end of the summer these little Eryngium saplings will swamp all the rest creating a beautiful sea, with the topiary seemingly bobbing on the surface. 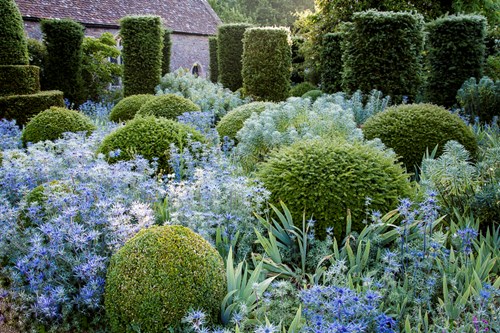 With the height of summer comes full colour. Lavender spills over the borders and onto the paths, with miniature pinks and perennial geraniums, valerian and foxgloves shooting from wherever they have seeded. The garden becomes a blousy and full-bodied vision of its ‘spring-self’. Loose formality is the gardens lasting mantra throughout the summer months; peonies heavy with their full blooms rest upon the box hedging as rambling roses (Rosa 'Albéric Barbier' and 'Félicité-Perpétue') and sweet peas snake through borders and tussle for space around obelisks and teepees. 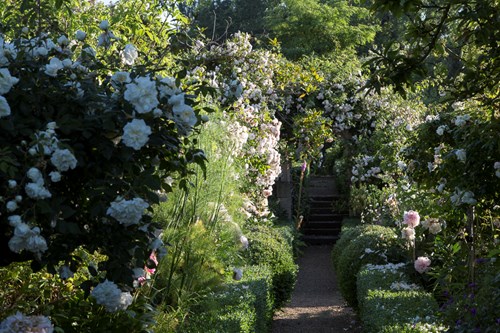 The formal gardens at Hanham, in the summer, are quintessentially a rose garden, with dozens of varieties drawing you down paths and into corners to enjoy each one’s unique scent. The varieties that I particularly enjoy at Hanham, and are worth seeking out on your visit are Rosa ‘Charles de Mills’ with a structure like crushed crimson velvet and its intense fragrance make for a heady combination. Another great rose to seek out in the borders is Rosa ‘Ferdinand Pichard’ with its marbleised pink and white stripes, you cannot miss it. Finally there is R.' Étoile de Hollande’ which lounges against the house’s Arts and Crafts kitchen, its deep red petals and intoxicating perfume may give you yet another reason to stay at the tea stall for another slice of cake. More than an honourable mention deserves to go to our Delphinium border that stretches along the Chapel Walk, with four shades of beautiful blues, these Blackmore and Langdon delphiniums stretch high above the bed like blue rockets being sent into the sky. 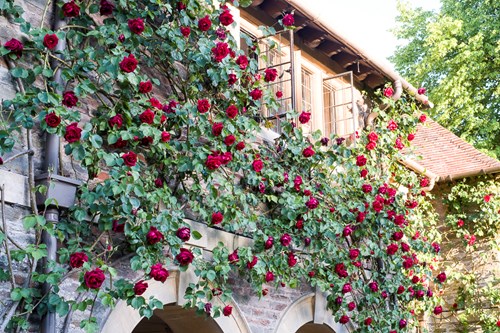 Away from the kaleidoscope of colour in the formal garden, summer in the woodland garden is a green oasis of calm and dappled sunlight. Giant Gunnera, ferns and Philadelphus surround the ponds which are gently fed by the natural stream that runs through the gardens. At the far end of the woodland garden, towards the back of the house is the Stumpery, originally a concept designed by the Victorians, and recreated by the Bannermans at Hanham as a prototype for the much larger-scale stumpery they designed and built at Highgrove, in Gloucestershire. Constructed from upturned Chestnut roots, installed in a mound or clump, the negative space is used to plant shrubs and flowers such as hostas, ferns and other woodland plants. The Stumpery is also particularly striking when displaying snowdrops in spring and with the spires of foxgloves towering over the distressed roots in summer. 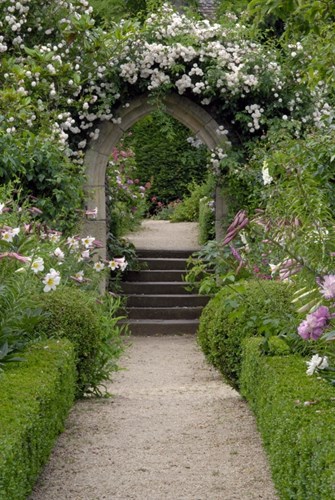 Later in the summer the soft pastel tones and delicate pinks turns to a fiesta of burnt oranges and deep reds. Along the Chapel Walk, the delphiniums seem like a distant memory as Crocosmia ‘Lucifer’ and ‘Hell Fire’ push their way forward, followed by Dahlias in all manner of bold patterns and vivid colours. Helenium and Gaillardia dot the formal beds, softened by the cotton wool flowers of the Hydrangea paniculata which continue to see the garden through the late summer and early autumn along with other highlights such as Magnolia grandiflora and an abundance of apples, pears, quinces and finally medlars.

As the last medlar fruit is harvested in late November and the fluffy clouds of Hydrangea turn to tissue paper the gardens begin to retreat into winter to hibernate and rest ready for the next spring to come, leaving only the topiary as a reminder of what had been and what we have to look forward to again next year.

It is these continual shifts in colour and scent that constantly rejuvenate the gardens structure throughout a year, and make it such a pleasure to visit and wander around at any time of the year. However, for those visiting the Rare Plant Fair on Sunday 11th June we hope you have the best of everything Hanham has to offer, as for me, the height of summer is Hanham’s most glorious, romantic and exciting phase as roses ramble and peonies tumble and you are transported to a rural and quintessential British idyll.

Hanham Court Gardens are open to the public on selected weekends for the National Garden Scheme and for our Rare Plant Fair.

All photos except the first are by Mark Bolton (www.markboltonphotography.co.uk)