John Graham from Steventon Road Nurseries, on why trilliums are definitely desirable, but easier to grow than you think! - 22 March 2015

Many of us, gardeners and naturalists, have had our interest and imagination captured by Trilliums. They are desirable plants due to their striking appearance and showy flowers. Their relative scarcity in gardens, the perceived difficulties of growing them and the combination of these factors adds to this desirability. In North America (where a number species occur as wildflowers) they are more generally known, for example a Google search using the word Trillium will reveal hundreds of businesses using Trillium as a name or logo (if you want find out more about trilliums on the web google ‘Trillium plants’). In Japan they are revered in the same way as hepaticas, peonies and hostas; many different forms have been selected and collected. 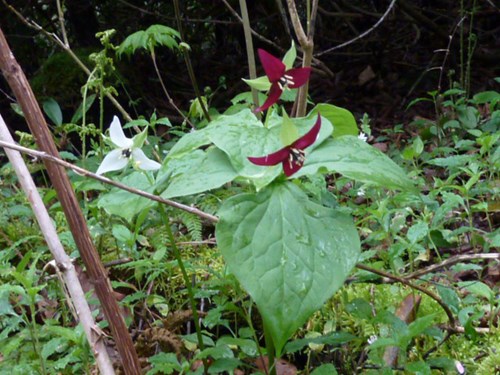 Trillium erectum growing in the Great Smoky Mountains where the white form is more common. The striking form of the plant lends itself to use in corporate images.

In eastern North America species can be divided into two groups by their distribution; the ‘northern/alpine group’ and the ‘southern/warm temperate group’; although these two groups overlap where the Piedmont and Appalachian Mountains meet. Trillium species are notoriously difficult to identify, especially the pedicellate group which are notorious for producing natural hybrids. This makes field observation challenging and rewarding! The most recently discovered species was found in Tennessee and was described in 2013 bringing the number of new species found in the USA since 1975 to three. 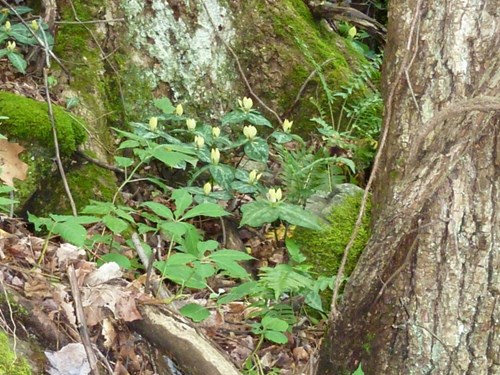 Trillium discolor An endangered species with very limited distribution in the Carolinas and Georgia; rare in cultivation. This is a sessile trillium. 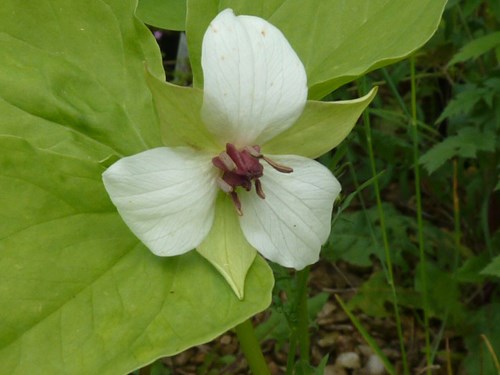 Trillium rugelii A robust species, locally quite common. This is one of the pedicellate trilliums

Trillium have underground rhizomes that produce vegetative buds, each of these buds produces a single stem with three leaves. Strong stems will produce flowers above these leaves. Damaged stems don’t produce another set of leaves and that bud dies. In the following year new buds will form from strong rhizomes but if such damage is repeated then the rhizome will dwindle. Trillium seedlings must not be allowed to dry out during active growth in their early years as the rhizomes are too small to produce replacement buds. The rhizomes produce new roots in the autumn to sustain the plant during the following year; if these aren’t produced, or are killed by drying, the plant will struggle to grow. This is why responsible producers do not supply dry trillium rhizomes; by all means buy moist dormant rhizomes with undamaged roots as these establish well. The most fool proof way to establish trilliums straight into the garden is to buy pot grown plants with large crowns but be warned these aren’t often available and will be expensive!

Study of plants in their natural habitats provides us with big clues as how to grow them in gardens. A common feature of all trillium habitats is that they are found in humid or moist climates, the soil is always wet (but not stagnant) when they are in active growth. All successful trillium growers in UK recognise that trilliums need plenty of water during growth and that they should not be forced into dormancy by drought; in the south watering will often be needed to stop this happening. Trilliums are often regarded as needing cool growing conditions but this applies to the ‘northern/alpine group’; these also need cold to promote flowering. The species with southern distribution, including the sessile trilliums, where the climate is warmer are less dependent on cold to promote flowering. This makes them more suitable for growing in our climate in Southern Britain but it is worth giving these a sheltered spot as they can come into growth early and be caught by frost. In the wild most trilliums grow in shade but some (especially those of the ‘northern/alpine group) will grow in more open areas. In our climate (Southern Britain) most shade trees will take too much moisture to allow trilliums to thrive. It is better to plant under small trees that don’t use so much water (e.g. apple) or use the shade of walls or fences where there are no trees. 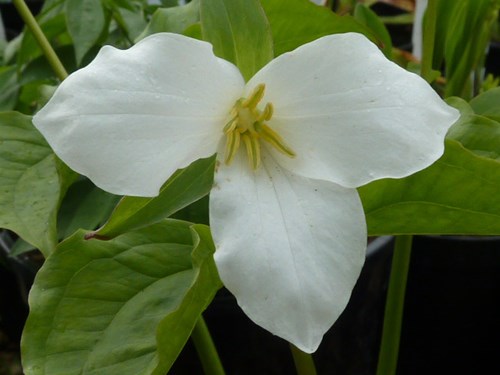 Trillium grandiflorum ‘Wisconsin Strain’ A good form of this widespread species. One of the ‘northern/alpine group’ this needs to be grown in cooler conditions.

Trilliums have gained the reputation that they do not grow when there is lime in the soil; in most species this is unjustified and in the wild some are only found growing in limestone soils. On the nurseries all our trilliums have some lime, none show any ill effects but I wouldn’t attempt to grow them in chalky soils. 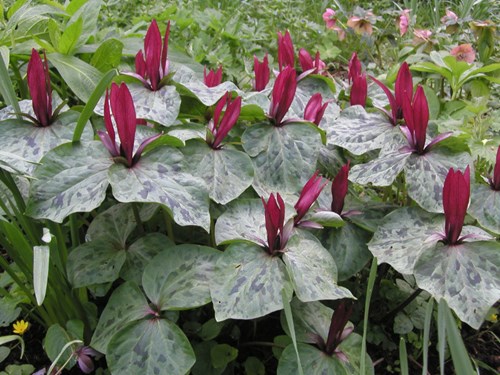 Trillium chloropetalum A good clump growing in limey soil in the Cotswolds.

For our region the following species can be recommended:

Trillium grandiflorum is relatively easy to obtain. The pink flowered forms and the selected form from Wisconsin are very desirable but not easy to find. Two doubled forms (T. g. 'Snowbunting' & T. g plenum) are both worth growing but are slow to increase.

Trillium chloropetalum. This is showy and grows well in Southern Britain. Grow it in a sheltered place in areas prone to late frosts as it comes into growth early during mild spells.

Trillium pusillum. This is a small species in the wild it grows in sphagnum bogs, but is surprisingly easy to grow in cultivation. Try it in a trough with drip irrigation from a water butt.

Trillium rugelii. Another species that grows well in the south, it is vigorous and forgiving. The flowers nod and are easy to see if the plant is in a raised area.

Trillium viridescens. Of the species that I grow this is the most suited to our climate and increases at the fastest rate. The colouration is subtle but a well grown clump is very ornamental. 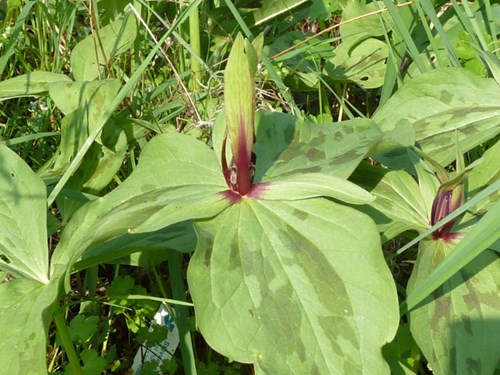 Trillium viridescens Well-suited to the climate in Southern England – just provide plenty of water during growth.