Heather Godard-Key, from Fibrex Nurseries, on the National Collection of Pelargoniums held by the nursery. - 16 June 2017

They’ve had a long and chequered history. They have had their name so well and truly muddled up that it’s almost become a national obsession getting it wrong. They’ve been divided up as a family, each sub-division becoming fashionable and notorious for their own reasons throughout the centuries.

I am of course, talking about Pelargoniums.

Go back 350 years or so and it was the species & early species hybrids that got all the attention. Not very surprising, really, as it wasn’t until the first species were brought over here from Africa and grown together under the same roof, as it were, for the first time that their ability to hybridise became apparent. People being people, it wasn’t long before hybridising got under way in force….

It’s an incredibly diverse genus and because of their diversity the genus has been split up into what is now 9 groups thanks to the recent addition of the Zonartics. The groups are as follows

The current trend is for the scented varieties and the species. The latter I find very reassuring as many of the species had become quite rare, and this renewed interest will hopefully not only help to share the burden of conservation but could also pave the way to new and very interesting hybrids.

Scented Leaf Pelargoniums (often referred to as scented geraniums which makes my blood boil a bit, yes some geraniums have a fragrance but it’s more eau de cat than eau de cologne..)

With over 120 scented varieties in the National Collection it is fair to say that there is quite a selection to choose from. Their fragrances vary from cinnamon, nutmeg & spice to oranges, lemons, apples & ginger. Cedar wood, Pine, Lavender & Rose. They can be pungent or sweet, smell of juniper, mint & peppermint. I often ask people what makes a lemon smell like a lemon. It usually provokes a little thought which is always a good thing. In brief it’s all about volatile chemicals and Pelargoniums have a lot. There are over 120 volatile chemicals in a Pelargonium leaf and it’s the combination of these chemicals which makes them such excellent mimics.

Here are a few of my favourites.

‘Attar of Roses’. How can you not love this plant? It’s beautiful, and can be grown in a pot or used as a seasonal gap filler in a mixed border, and as the foliage and pretty, small pink flowers pretty much go with any colour scheme it’s extremely useful. But that’s not where it ends. For this little beauty is also an excellent flavouring. You can infuse the leaves in water or milk depending on what you wish to use it for or flavour sugar simply by layering sugar and leaves in an air tight jar on a sunny windowsill for 2-3 weeks. The sugar can then be used for jams, cakes or any number of goodies. 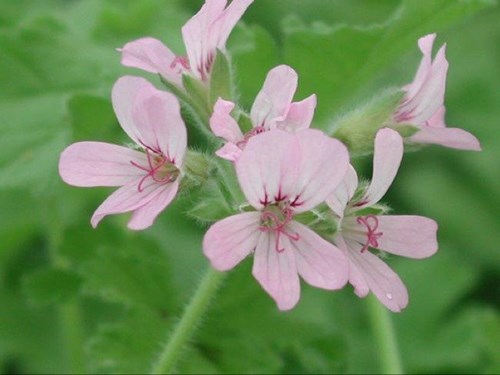 ‘Tomentosum’. This is a monster of a Pellie, with fabulous big leaves with a strong scent of peppermint this makes a great peppermint tea and can be used to make a superb foot rub which is really very refreshing. 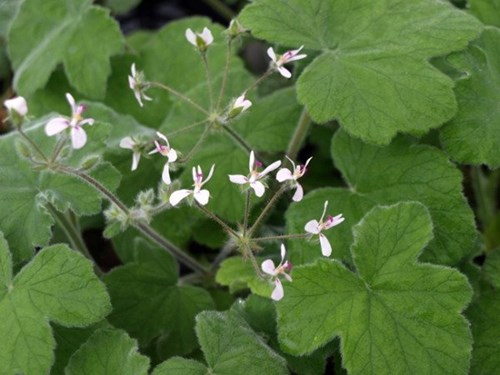 ‘Pink Capricorn’ is possibly one of the best Scented Leaf Pelargoniums for sheer excellent flower power. It simply doesn’t stop and the bees adore it! 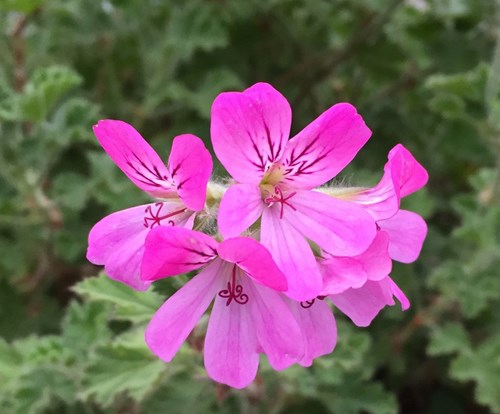 ‘Lemon Fancy’ has to be one of the best Lemon Scented varieties which can be used for cakes, ice creams & sorbets although it has to be said that ‘Mabel Grey’ is always added to a Gin & Tonic on a hot summers day. 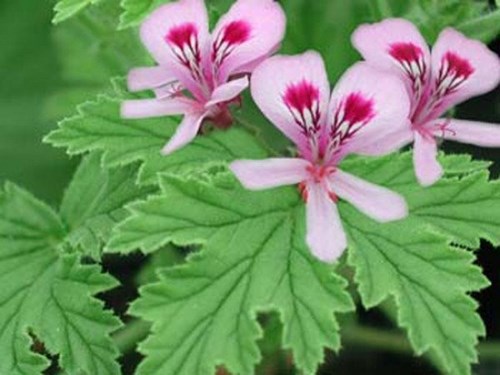 For a true Pelargonium Cake (much fabled for it’s surprising flavour, not unlike Turkish Delight) we use ‘Radula’. Easy enough to simply drop some leaves into the bottom of the cake tin, pour the batter on top and bake as usual. I also infuse the leaves in some milk and use this to flavour the butter icing filling for the cake. The overall taste is just gorgeous. 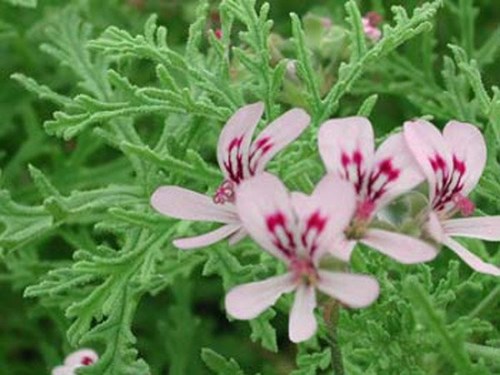 Being such decorative plants that are also great for pollinators and can be used in the kitchen has really brought these plants into the spot light. And rightly so, as now the health benefits from them are also being seriously looked into.

Pelargonium sidoides is a well know species Pelargonium with a long history of being used in traditional medicine in Africa. Research is now being undertaken into how this unassuming plant can help modern medicine and it has been found to have antibiotic properties as well as antiviral and anticoagulant. Altogether it's quite a remarkable plant. It’s also very pretty. Its silvery foliage making a great foil for the small, dark magenta flowers. 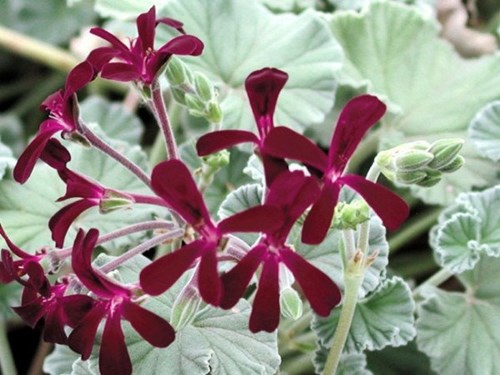 There are roughly 220 species that have been described. Of these only 20 odd have so far been used in the hybridising of the many thousands of cultivars that are now available. Dedicated amateur breeders continue to experiment with potential new parents, more often than not with little success. I will briefly mention our newest group of Pelargonium….

These are the result of 34 years of breeding. What started out as one man’s dream of breeding a yellow Zonal Pelargonium has become a completely new range of varieties. Whilst these are not yellow Zonals there are certainly some yellow varieties amongst them and they are extremely beautiful to boot! Having contacted Kirstenbosch Botanic Gardens in South Africa to try and get hold of a pale yellow species called Pelargonium articulatum and after 7 months of quarantine where the poor plant didn’t get exactly the tlc it was used to, it finally arrived in Australia where an intensive breeding programme was started in Cliff Blackman’s back garden. He crossed P. articulatum with a Zonal and the result of this with an Ivy Leaf variety, then crossed this with P. articulatum again and so on for many, many years until finally some seeds were finally, triumphantly brought to the UK, where the breeding continued and we now have this wonderful new collection of plants that have been donated to the National Collection at Fibrex. Below are images of some of these varieties. These are currently very precious, you won’t see them anywhere else but we do hope that they will be available to the general public as early as next spring. 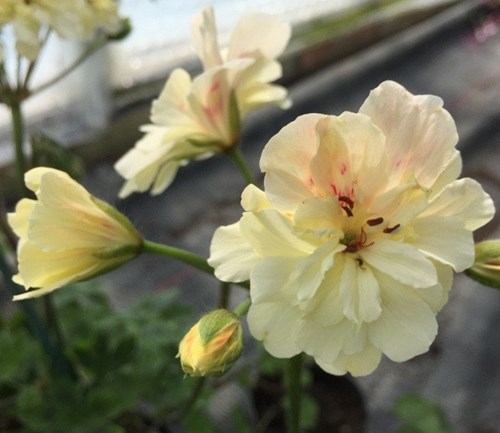 And so it seems that we have come full circle. We started an obsession with hybridising Pelargoniums nearly 350 years ago. One by one each group took the spotlight for their brash flower colour or crazy coloured leaves, going from massed planting schemes to container gardening. For big blousey flowers or fragrance until at last we are back to basics and somewhere out there is someone hoping to be the next person to breed a new category of Pelargoniums, giving us yet more fabulous plants to immerse ourselves in. 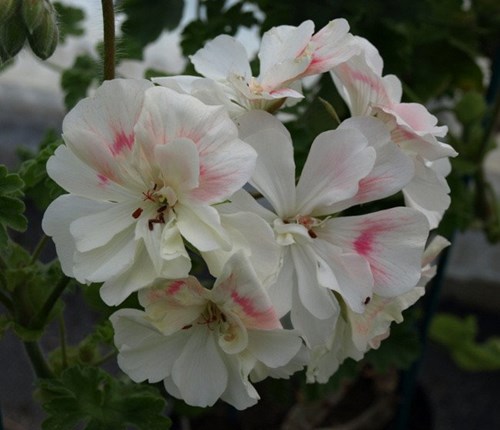 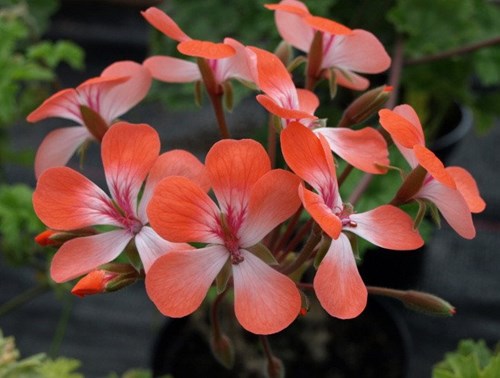 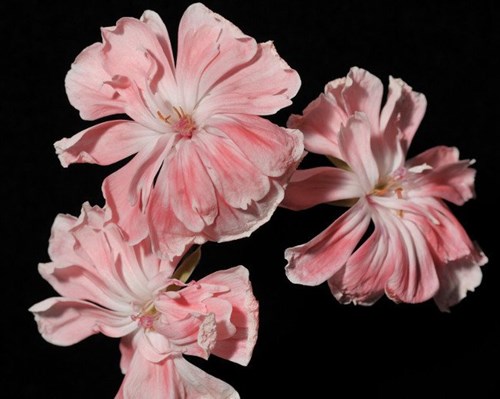