Charlie Pridham, from Roseland House Nuseries in Cornwall, on some exotic and unusual spring-flowering climbers from Australia and Chile. - 02 March 2018

If the winter period of colder weather has left you and your garden feeling a bit worse for wear, you could be excused for hiding in the conservatory or greenhouse while Spring gets things back on course. I find that several of my favourite spring flowering climbers came originally from Australia. Evergreen, they will all grow outside on a warm sunny wall in Cornish, coastal and urban gardens, but would, I suspect, have their flowering damaged some years by the frosts. However, even in an unheated conservatory it is business as usual.

The first to flower is a plant the Australians call "the native Wisteria", Hardenbergia violacea. This is an evergreen twiner that has bunches of very pretty violet blue flowers very early in the year. Easy to grow in the ground or in pots, it has handsome long leaves and can be allowed to twine through other plants. Although it requires a leap of imagination to see it as a "Wisteria" it is a very dainty climber. 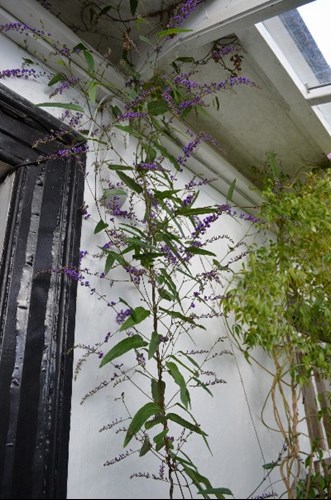 Next up, is a relative of Hardenbergia called Kennedia. There are a number of different Kennedia species, but the one I find is best in spring is Kennedia rubricunda. The Australians call several of these different Kennedia "Running Postmen" after the old style red uniforms worn by their postal workers and the habit of the plants to sprout up quickly and climb, and as soon as you see the flowers, which are a bit pea-like, and in shades of red, you can see why. The spring flower display is usually followed by furry pea-like seedpods. Again this is not a huge plant and can be accommodated in pots as well as the ground.

My third choice for spring under glass is one of the Pandorea species, Pandorea pandorana, the "Wonga-Wonga vine". The masses of cream-white, foxglove shaped flowers are delightfully marked inside with pink and have a light and pleasant fragrance. It is potentially a large vigorous plant; there are examples in gardens all over Cornwall with a lovely specimen at Polgwynne, Feock (open by appointment), which is growing with the Wisteria. They both flower together and the whole looks stunning. Inside under glass they flower even earlier and can be constrained by growing in pots and hard pruning after flowering. 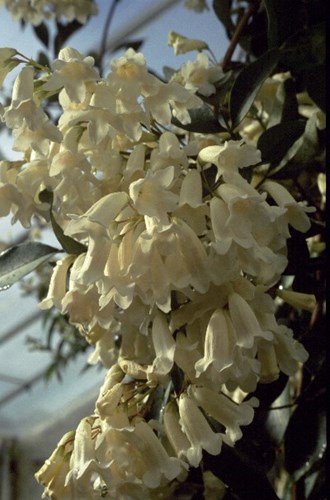 As well as the type species there are a number of named forms, such as 'Ruby' with pink flowers and 'Golden Showers', which is a lovely shade of golden yellow. All of these "Australians" are easy to grow, tolerating a wide variety of soil types, but do require a sheltered sunny position when they will brighten up your spring with their floral displays. 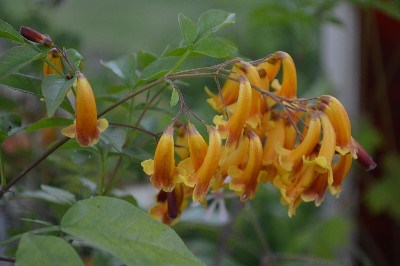 Out in the garden, it is the tough Chilean evergreen Ercilla volubilis that kicks off the year for us here. Its pale pink, powder puff flowers are beautifully scented in February and March. Self clinging and evergreen, it eventually forms a strong woody framework. 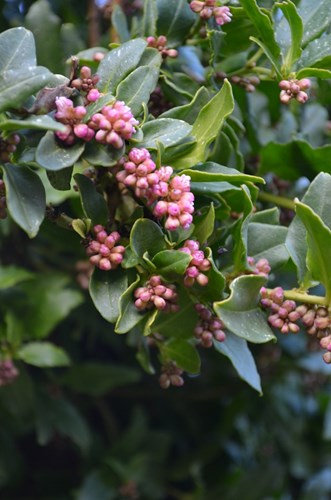