Colin Moat, from Pineview Plants in Kent, with his personal selection of his favourite ferns, one of his nursery's passions. - 14 June 2020

I can’t quite remember when I first fell for ferns, they sort of crept up on me. I’d kept them at arms length, I suspect, as I was intimidated by their incredibly complicated Latin names, and from feedback from other plants people, I was not alone. I surmise that this is what drew the educated Victorians to pteridology (there! I’ve lost half the readers already!) as they added to, and embellished, the names.

I bit the bullet when I decided to move the nursery towards the shady end of the plant spectrum, although I think this was more a case of realising that the majority of the plants I selected to have in the nursery were shade-lovers. I’ve always been drawn to plants that were ‘interesting’ either in leaf-shape, adaptation, colour range, long seasonal interest, tolerance and hardiness. I soon realised that ferns completely fitted into all these categories, so, slowly but surely, the range I offered expanded. I therefore come at this article with an element of fear and trepidation as, although I’ve been offering them for a decade or so, I’m well aware that there are still lots that I don’t know.

Anyway, I’m going to try and put together, based on what I've learned to date, a list of ferns that I think provide a good basis on which to build, and ones I wouldn’t want to be without. I’ll also point out here, that you don’t actually need a cultivated area either, as most ferns do really well in pots outdoors, and, once established, are pretty tolerant of random watering regimes.

Asplenium scolopendrium (30-60cm) or ‘Scollies’ or, as most people relate to, the ‘Harts Tongue Fern’ is, with its strappy leaves, possibly the most recognisable fern, and is certainly one of the toughest and can be seen growing in walls, cracks and crevices, in sun or shade. When I'm asked to recommend a plant for dry shade, its top of the list. It also comes in lots of variations and allowed the Victorians full rein in adding terms like (author goes and gets his Gardeners Latin book!) cristatum (crested), furcatum (forked), undulatum (frilly edges) which, I have to say, makes them even more decorative. In terms of maintenance, you might have guessed that you do more harm by overwatering. They're not overly keen on very acid conditions (hence their affinity with mortar) and cutting back the old fronds in March isn't necessary. 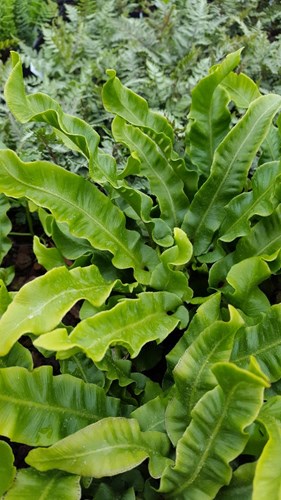 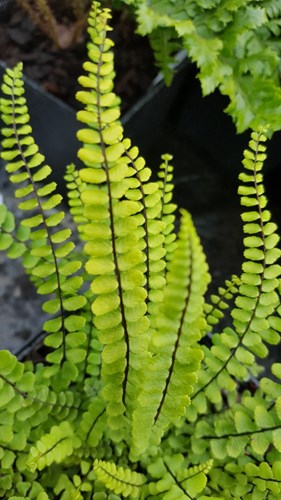 Polystichum setiferum (60-90cm) (Soft Shield) is a British native and, it seems, an almost bombproof fern, to which I can testify, having just witnessed big clumps, quite literally, being hacked out of my son's garden and replanted elsewhere, literally (I was not involved, I hasten to add!). Once established, it's another one that tolerates dry shade,but can also take a fair bit of sun too provided it gets enough water. In my own garden on the greensand ridge, after about 9 weeks without water one summer, its fronds dropped, but it sent out new ones once rain returned. It has a classic dissected frond, with the young frond showing white furry tips as they unfurl - like little lights. (setiferum – full of bristles). It has a number of selected forms worth looking for, including P. ‘Herrenhausen’ (60-90cm), which opens in a tight whorl of divided lobed plumes. It's also worth looking for P. setiferum cristatum forms, and the smaller congestum selections, as well as many others. 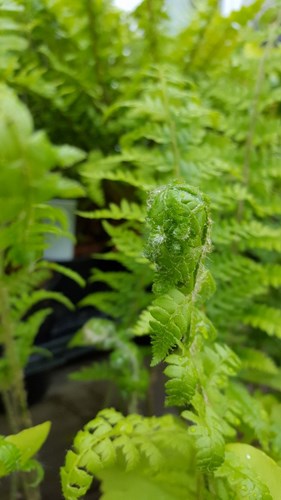 Polystichum polyblepharum (45-90cm) (Tassel Fern) from the Far East is one of my favourites with its young fronds beautifully shiny and bright. A fern book describes the fronds ‘bipinnate ovate-lanceolate blades are exceptionally lustrous’, I’ve put this in Google translate (Gardeners Latin again!) and it means 'feather-shaped leaflets on an oval spear shaped leaf'. These do require a bit more moisture to get the best from them. 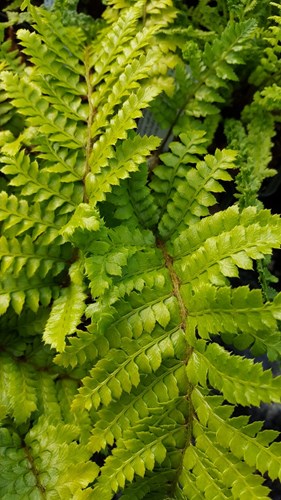 Dryopteris affinis and D. filix-mas both have a number of remarkable garden-worthy ferns but I’m going to just limit myself to a couple of other personal favourites. D. dilitata ‘Crispa Whiteside’ (up to 60cm) (Broad Wood Fern) prefers acidic sites but is another in the unfussy, bomb-proof category. The fronds of this are boringly described as ‘broadly triangular crisped fronds’ but I would just suggest are fluffy, which makes it stand out. It has character! 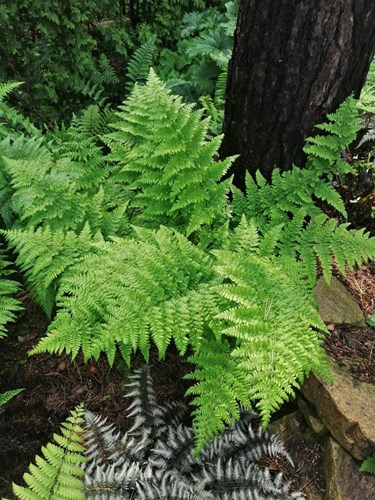 The next, D. erythrosora (60-90cm) (Rosy Buckler Fern) could be in contention to be my favourite. Originating from the Far East, its young fronds emerge reddish-bronze, and can be spotted and distinguished from a distance. For those of you flagging from the lack of Latin words so it gets its name from erythro (red) and sora (sori, these being the spore-producing cases/coverings). 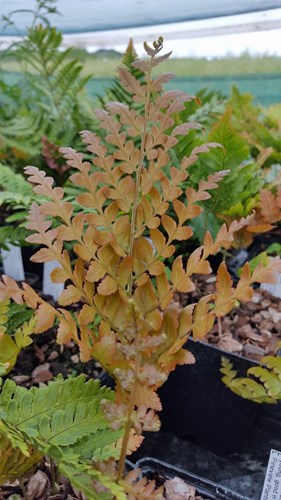 I always think of Athyrium as the extroverts of the fern world, offering an amazing colour range during the late spring and summer, and then, when the going gets tough in the Autumn, retiring for a little lie down in a darkened fern bed, to rest throughout the winter. The two main types available are Athyrium filix-femina (20-40cm) (Lady Fern) (found worldwide) and A. niponicum (30-60cm) (Japanese Painted Fern) (from the Far East) and there are many different named forms. From A. f-f, I would commend  A. f-f  ‘Dre’s Dagger’ with slender fronds and cresting at the top, and the popular, slender A. f-f 'Frizelliae'  (the ‘Tatting Fern’, named from the Lace industry) with tiny alternate leaflets up the stem; very distinctive, and, I suspect, a sport from A. f-f ‘Victoriae’ as it reverts to this from time to time. 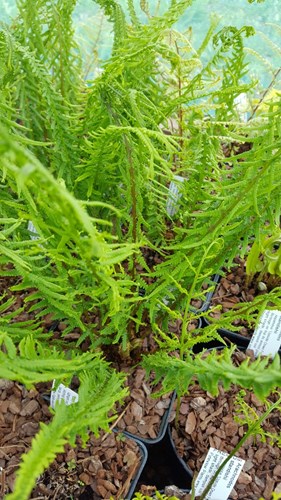 A larger number of varieties of A. niponicum are available, with A. n. ‘Applecourt’ being a nicely crested form. Some good coloured-foliage varieties to look for are A. n. ‘Regal Red’ and A.n. ‘Pearly White’…no translation required! 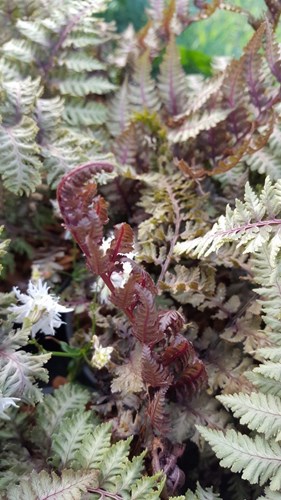 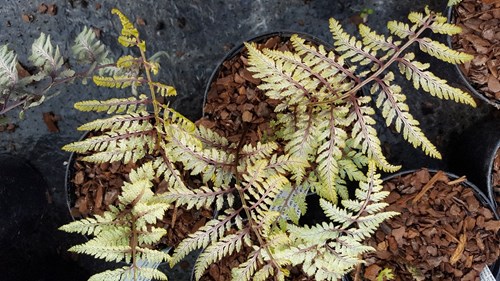 I can’t leave Athyrium, however, without mentioning Athyrium x ‘Ghost’, one of the hybrids between A. filix-femina and A. niponicum, with its beautifully graceful muted silvery-white fronds with hybrid toughness, definitely on my favourites list. I will add, however, the following caveat with all of these primadonnas; whilst they don’t like too much sun, (ruins my fronds Dahling!) they do like a bit of moisture(izing). High maintenance, but worth it! 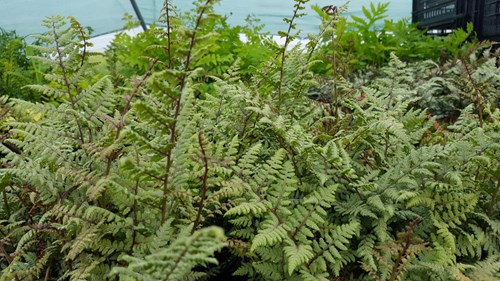 I’m going to own up here, I’m very much a latecomer to this next group of ferns, which is embarrassing as the National Collection holder lives only about 5 miles away from me! It was seeing Julian Reed’s display at Great Dixter about 5 years ago when they caught my attention.  Polypodium (10-45cm) (Polypody) and (a bit of Greek this time to mix things up a bit) poly meaning many and podion means foot, referring to its creeping habit, which makes them a useful addition to the fernery. The main hardy forms are Polypodium cambricum (lime preference) and P. vulgare (neutral to acid) and they really are tough cookies; P. vulgare is even found growing on trees. They offer something smaller and a little different; for example P. cambricum is summer dormant, producing a fresh new flush in late autumn (and could, for example, take over from the Athyriums when they go for a lie down) and will look good through the winter. There is a softness to their fronds too. P. c. ‘Richard Kayse’ is a good one to look for. P. vulgare, however, is a tough little streetfighter of a fern, determinedly covering the ground, not in a thuggish way, just useful. Another form is P. v. ‘Bifido Multifidum', which has crested and multi-divided fronds (childish I know, but I think of it as 'Biffo the Bear' - you may have to be of a certain age for that reference!) . Whilst I wouldn’t advocate these being placed in a sunny spot, like a number of ferns they can tolerate a fair bit of sunshine if they get enough moisture. 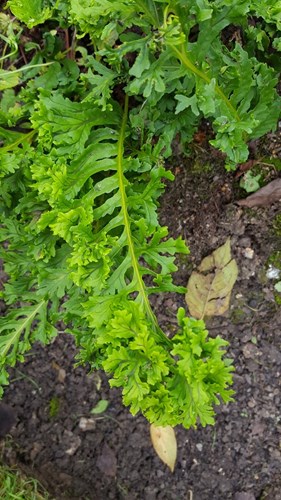 There are many other ferns I could rave about but if I haven’t lost you by now, you are probably looking longingly at the kettle! So I leave with the suggestion that you persevere with ferns, they are a valuable asset to any garden, and a number of them are often outstanding. In the winter, when lots of other things, (like the prima donna’s) are hibernating, they are dazzling with their beautifully frosted fronds.

Colin and Cindy Moat own Pineview Plants, based in Kent, where they grow a wide range of herbaceous perennials. Specialities include shade loving perennials and ferns (which are one of the nursery's passions), Sanguisorba, Thalictrum, Actaea and Roscoea. Colin was part of the 2018 RHS Roundtable for the awarding of AGMs for Epimedium, the results of which have now been published.

Website: www.pineviewplants.co.uk  During the current COVID-19 restrictions Pineview Plants can offer plants by mail order or for local delivery. Please check the website for full details.