Ian and Teresa Moss, from Rare Plant Fair, on the geranium relations that deserve to be better known. - 27 May 2017

Those of you who know us well know that here at Rare Plant Fair we’re quite partial to a hardy Geranium. They were a speciality of our nursery before we retired, being Teresa’s passion, and we grew over 75 varieties, most of which we still have growing in our own garden. So it was, perhaps, not surprising that, with more time for our own garden and for looking for new plants to try, our attention would turn to another genus from the Geraniacae family, Erodium.

Geraniacae as a family comprises three main genera, namely Geranium, Pelargonium and Erodium, as well as a small number of more obscure members. Of these three, it definitely seems as if Erodium is the poor relation of the family in terms of popularity. Consider the evidence; there are six Plant Heritage National Collections covering various parts of the genus Geranium, which has always been popular with gardeners, and many new varieties are introduced each year. Pelargonium, meanwhile, has five National Collections, including one held by Rare Plant Fair exhibitors Fibrex Nurseries. In contrast, there is no National Collection for Erodium (an opportunity awaits you!), and whilst the RHS Plant Finder online has 278 entries for the genus, the vast majority have no supplier listed and many of those that do are only grown by one or two nurseries. Having started to get to know these plants in the last couple of years we think that this is a great shame; all of the ones we’ve chosen have proved to be easy to grow and long flowering. Many also have very attractive foliage.

There are around 60 species of Erodium found in the wild; the common name is ‘Stork’s Bill’ or ‘Heron’s Bill’, taken from the shape of the mature seed pods. The largest numbers come from Europe and Central Asia, especially around the Mediterranean, but they are also found in North Africa, North and South America and some cooler regions of Australia. Their flowers are five-petalled and come in a range of colours including pink, purple, red, white and yellow, quite often with distinctive markings on the upper 2 petals; in contrast to Geranium, blue, whilst not unknown, is a rare colour for Erodium. Many come from limestone mountain areas and the smaller varieties are often best grown in rock gardens or alpine troughs, but the larger types are good border plants. Regardless of size, they are hardy and all like well-drained soil in sun, with the pH neutral to alkaline. Good drainage is important; whilst completely cold hardy, they may fail if waterlogged during the winter months.

The most widely available Erodium are some of the small, mat-forming alpine perennials selected from E. reichardii or E. x variabile (E. corsicum x E. reichardii). The species come from Majorca and Corsica. These are all low growing (5cm) perennials with a profusion of small (8-10mm) flowers and small, heart shaped green leaves. The best known variety is E. x variabile ‘Bishop’s Form’, which has rose-pink flowers that are a little larger than other selections and which are also strongly marked with dark veining. There is also a double form, E. x variabile ‘Flore Pleno’, which is very beautiful but also quite elusive – many of the plants offered under this name are not double at all, so make sure you buy this one in flower. There are also good white forms of both E. reichardii and E. x variabile. They are all very long flowering, from Spring through to Autumn, and are easy to grow provided that they have very good drainage; they hate winter wet. 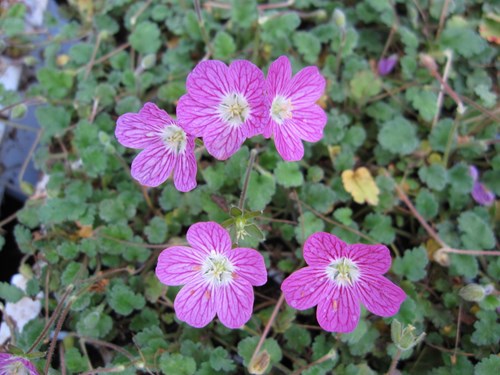 Another more widely grown species is E. trifolium, which is found in the wild in Turkey. The foliage is apple green and looks like that of a Pelargonium. The flowers are white, with the upper two petals carrying purple blotches, and for us here in Somerset it flowers from late April onwards. It grows to around 30cm and has a somewhat lax habit, but is a lovely choice for the front of the border, especially in a less formal or cottagey planting. If it likes you, it will seed around gently. This was originally supplied to us as E. pelargonifolium, which looks quite similar, and it appears that many of the plants that are offered as this are in fact E. trifolium. Our thanks to John Beaulieu for his help with the correct identification. 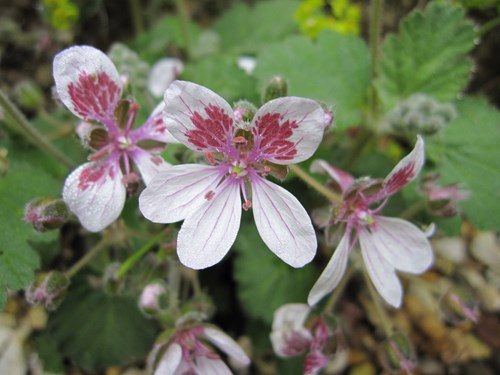 Originating from the Pyrenees, Erodium manescavii is another of the larger Erodium, growing up to 45cm. We have found this to be a very good doer, with long pinnate basal leaves about 30cm long with long-stalked clusters of magenta-purple flowers with dark spots on the upper two petals. This is a good plant for front of border and also self-seeds when it’s happy with you. 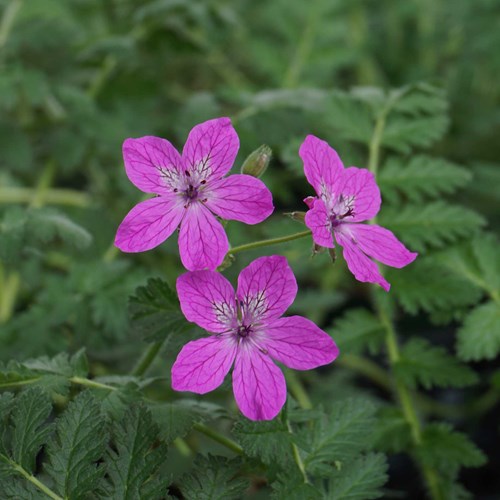 Yellow is not a flower colour that is found in Geraniums, but is available in Erodium in the form of Erodium chrysanthum. Hailing from Greece, this is one of our favourites. The foliage is beautiful; the finely dissected silvery green leaves give an almost ferny look, and the flowers are borne above the foliage on stems up to 30cm long, in clusters, and are a glorious sulphur yellow. 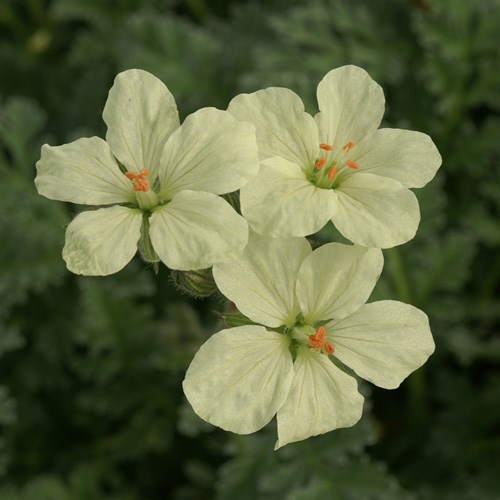 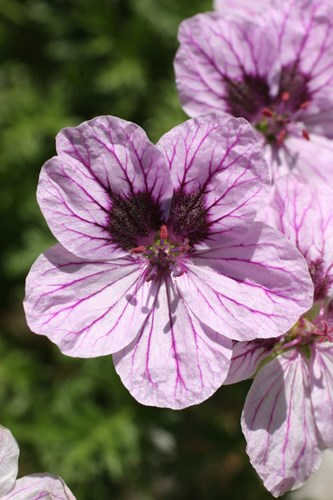 We’re still relatively new to collecting Erodium, and we still have many to find, but here are some of the others that we’ve been tempted to grow. Whilst those mentioned previously are relatively easy to find, the rest below will only be available from one or two nurseries. Many have lovely, detailed markings on the petals that are quite captivating. 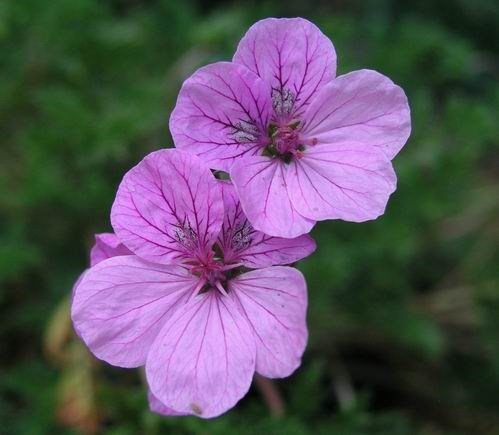 E. ‘Mesquita’: This hybrid is best thought of as a miniature form of E. manescavii with green ferny foliage and deep pink flowers. Height 15cm.

E. ‘Cezembre’: This is an absolutely stunning variety with soft green ferny foliage and lovely peachy pink flowers. About 15cm tall, it flowers from Spring to Autumn 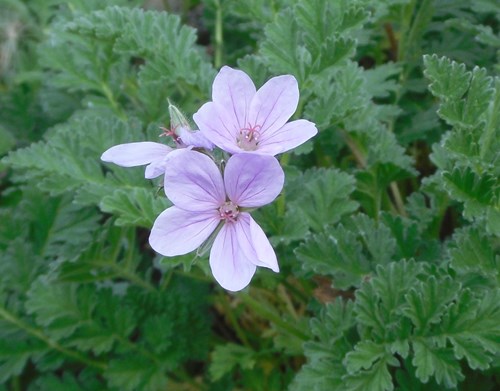 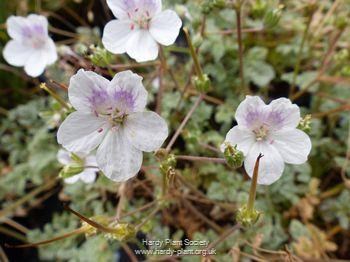 E.'Frans Delight’: Another beautiful hybrid with feathery foliage and mid pink flowers. Forms a mound to around 15cm. 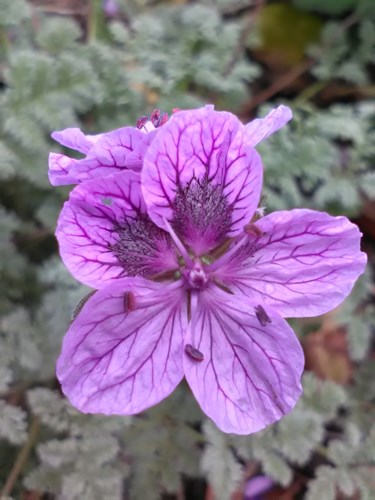 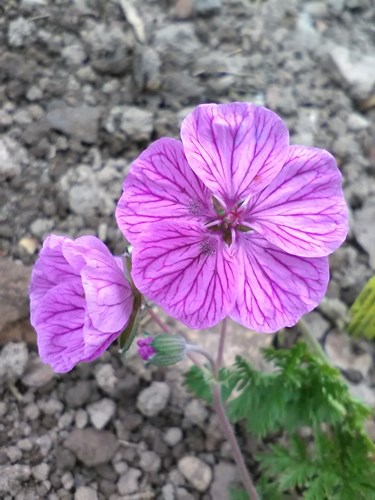 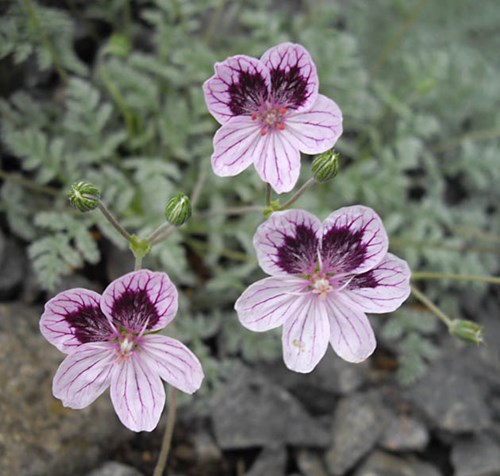 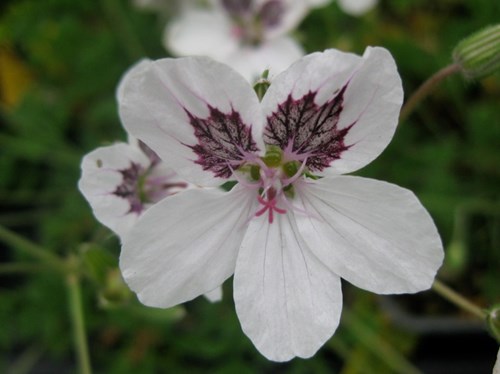 This is just a small selection of the excellent varieties of Erodium that are available. There are more for us to collect; we’re especially intrigued by E. grunium, offered by Plant World Seeds. This is one of the more uncommon blue varieties, hailing from Sicily, and they say in the catalogue ‘Large violet blue flowers are produced all summer, followed by remarkable, enormous corkscrew seeds which are commercially used for making hygrometers (to measure dampness) - wet one and watch what slowly happens!’. They also offer a blue Australian variety, E. crinitum. We feel an order coming on! 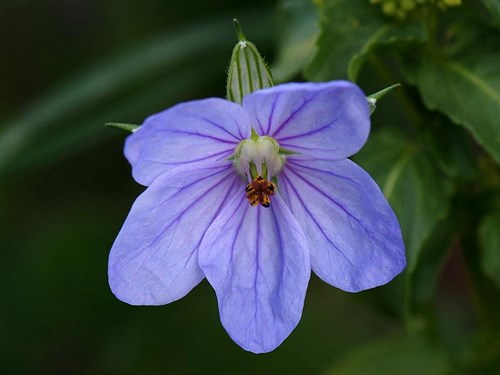 We hope that this has convinced you that Erodium is a genus that deserves to be as well-known and popular as other members of the Geraniacae family. Look out for them on the stalls at our Fairs!

Ian and Teresa Moss are retired nursery owners and organisers of Rare Plant Fairs. But as obsessive, compulsive gardeners, you may occasionally find us at some Fairs selling the surplus plants (all interesting!) from our own propagation!