Our first encounter with the genus Sanguisorba was back in the days before we ran our own nursery. For one summer, Teresa helped at an organic herb farm in South Wales, and there we came across salad burnet, Sanguisorba minor, which has a fantastic flavour of cucumber with a touch of black pepper, and lovely fresh ferny foliage. We recommend this for your herb garden; it’s a great addition to a salad, and an even better one to your summer Pimms!

When we started our own nursery, it was some years before we discovered the virtues of the ornamental varieties of Sanguisorba, but three events changed this. Firstly, we came across a great selection in a wholesale catalogue of bare root perennials that whetted our appetite, and we ordered a couple, Sanguisorba hakusanensis ‘Lilac Squirrel’ and S. tenuifolia ‘Bordeaux’, to try in our range. Both were outstanding plants (more of which later) that proved to be extremely popular with our customers. Then in 2016 we visited the new garden of Kim and Rob Hurst at the Field Farm, where there were several superb Sanguisorba included in their beautifully designed herbaceous borders. And then the clincher was our first visit to Avondale Nursery, near Coventry. The nursery is owned by Brian and Steph Ellis, who hold a National Collection of Sanguisorba (one of three Collections that they have), and not only do they have a superb range, but they are all brilliantly displayed in their Library Garden along with many of the other perennials that they grow. Well, we were hooked… 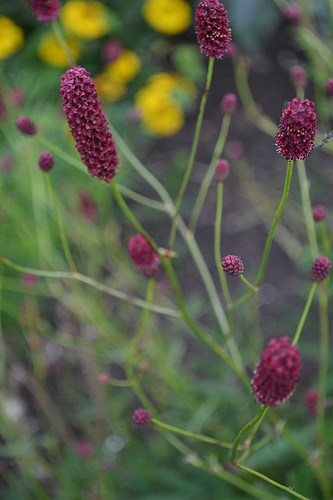 Sanguisorba is a relatively small genus in the Rosacea family (approximately 30 species are known), and are found in temperate regions of the Northern hemisphere. They can range from a few centimetres tall to a couple of metres, and are hardy, herbaceous, clump forming perennials, with attractive and neat pinnate foliage which varies in colour from fresh green to blue or grey-green, and is sometimes pink tinged in the spring. The ‘flowers’ are actually clusters of many tiny flowers, which are organised into rounded buttons, upright plumes or catkin-like tassels, depending on variety, but perhaps the best description is the one that Brian and Steph use, ‘bobbles’. It’s often said that they give a light and airy feel to a border, but don’t let that fool you into thinking that they lack presence; they make a strong and very individual statement in any planting scheme.

Sanguisorba are easy to grow in any good garden soil, and are not fussy about soil type, but do best in moist but well drained soil in sun or part shade; however, we have some in our own garden that are thriving in very well drained soil that can be a bit on the dry side in the summer, so they appear to be quite adaptable. They have, perhaps, not been used by gardeners quite as widely as they deserve, but have become better known in recent years through their use in naturalistic and ‘prairie’ style planting schemes. However, they are equally at home in more traditional herbaceous borders, and there are selections suitable for both front and back of borders. Taller varieties may need staking in very windy gardens but they are generally strong and self-supporting.

Here are just a few of the varieties that we like:

Sanguisorba hakusanensis ‘Lilac Squirrel’: S. hakusanesis hails from Japan and Korea, and is a species that produces large (50cm) grey green leaves with large, fluffy, nodding flower spikes. The selection ‘Lilac Squirrel' has large, stunning flower spikes in lilac pink, together with excellent blue-green foliage (we used to sell most of our plants on the foliage alone). For us grows to around 100-120cm tall and is in flower from July to September. Highly recommended; this is the one that got us hooked! 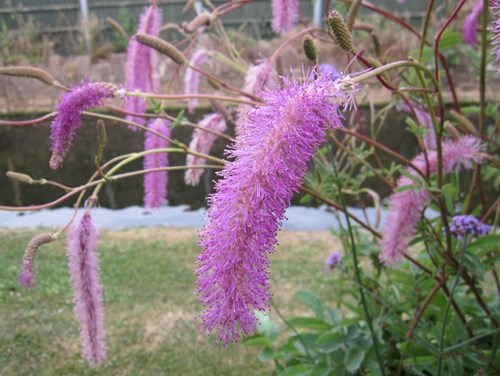 Sanguisorba officinalis: This is very widely distributed in the wild across the Northern hemisphere, and has fresh green foliage with tight, button or egg shaped flowers. There are a huge range of selections of this species that are very different in size. For the very front of border, or for an alpine garden, is S. officinalis var. microcephala ‘Little Angel’, a silver variegated variety carrying button shaped burgundy flowers over a tight mound of foliage and is only 15cm tall in flower. 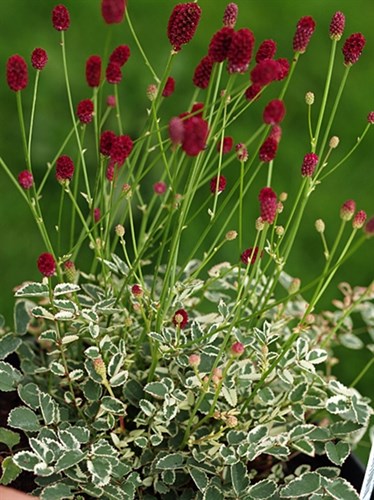 At the other end of the range is S. officinalis ‘Martin’s Mulberry’. We first saw this in Kim and Rob Hurst’s garden, where it stopped us in our tracks with its large airy mass of burgundy flowers at around 1.8m tall. Ours (we were lucky enough to snap up Avondale’s last plant of the year last July!) is planted at the back of our hot border where it combines beautifully with late summer perennials and grasses. 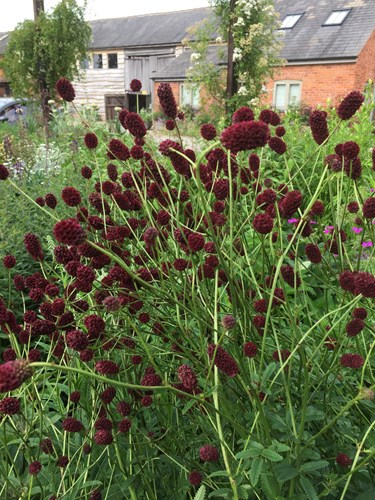 There are many other selections that offer different height options, including S. officinalis ‘Red Thunder’, lovely compact variety with attractive foliage and lots of maroon flowers, at about 75cm for us. 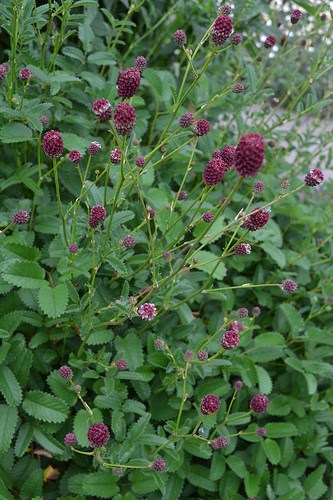 Sanguisorba tenuifolia: Originating from northern areas of Asia, this is a generally tall, elegant species with narrow leaves and flowers in colours ranging from white through pink to dark red. The flower shape varies depending on the variety. The first one we obtained was S. tenuifolia var. alba, which is 1.8m tall and needs no support even in our windy garden! The flowers of this variety are white (obviously!) and resemble drooping catkins. 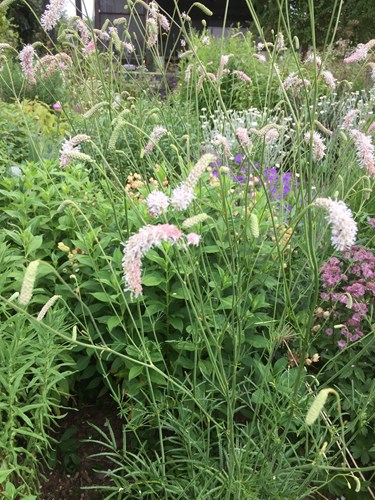 The flowers on other selections can be more upright, for example the outstanding S. tenuifolia ‘Pieters’, which is shorter at 1.2m; the flowers are maroon red and persist for ages. And in between the two at 1.5m is the aforementioned S. tenuifolia ‘Bordeaux’, which, you’ll be unsurprised to learn, has wine-red flowers. 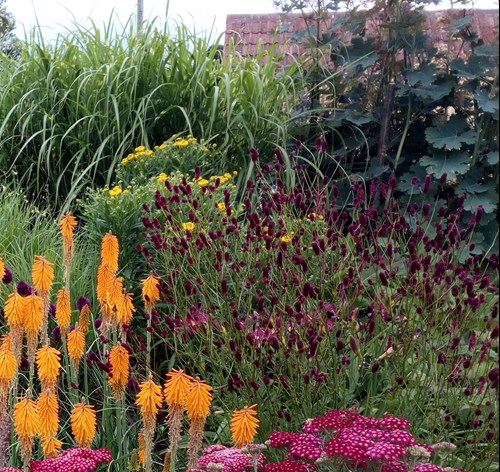 Sanguisorba tenuifolia 'Pieters' in the Hot Border in our garden (Photo: Teresa Moss)

Sanguisorba canadensis: We have not grown this one ourselves yet but are always struck by the beauty of this species when we see it in the flesh or in photos. This is a North American species and carries long white bottlebrush flowers on red tinged stems. 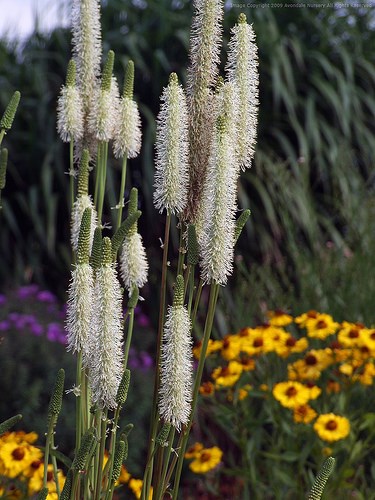 Sanguisorba are very promiscuous and hybridise easily, so there are many new hybrid selections now available. There were several that were on trial (and a number yet to be named) in Avondale’s Library Garden when we visited last summer, that had arisen as chance seedlings, some of which were truly stunning. We went away with S. ‘Pink Brushes’ which has rose-pink bottlebrush flowers and for us flowers from late July onwards, and is very beautiful. 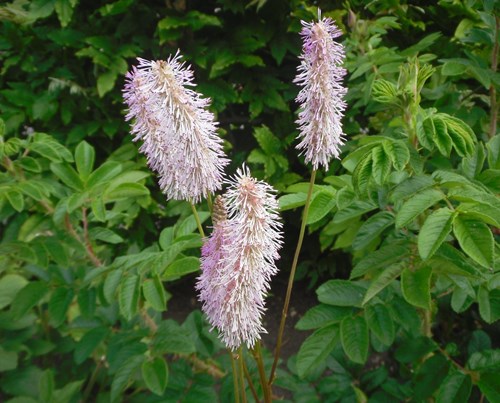 Two of the best known hybrids are ‘Tanna’ and ‘Pink Tanna’. Both have button shaped flowers, ‘Tanna’ is compact at 30cm with dark red flowers. 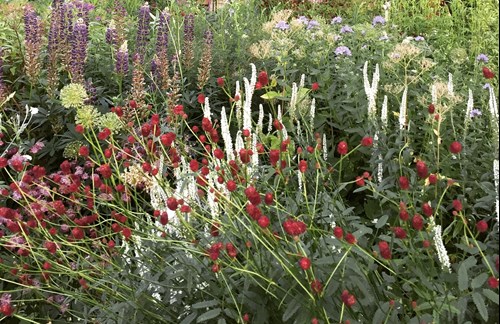 ‘Pink Tanna’ is a taller at 80cm and the flowers are light pink. 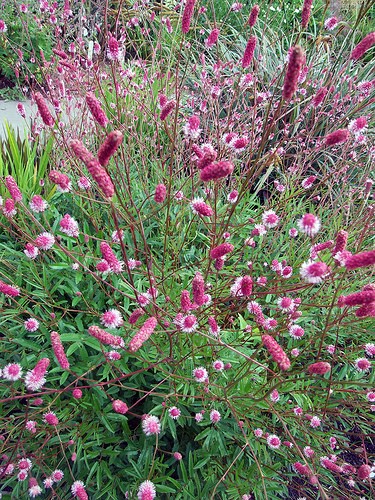 Another good variety is S. ‘Purple Tails’, which is a tall variety growing to around 1.5m with purple buds emerging to give pink catkins-like flowers. 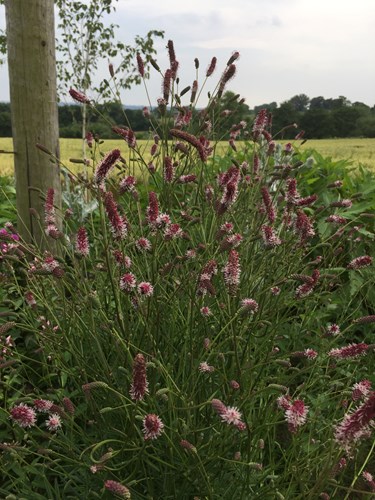 There are also some fantastic introductions from Avondale that we have yet to grow. Here are just a few:

Sanguisorba ‘Candy Floss’; New this year, it’s a strong grower to 1.5m with fresh candy-pink flowers in August and September. 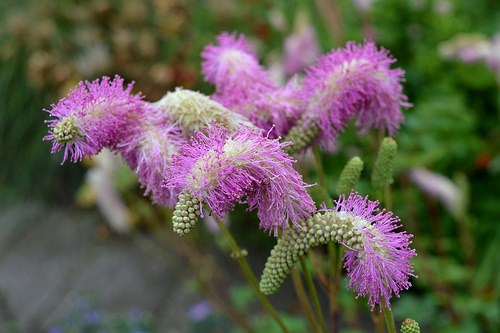 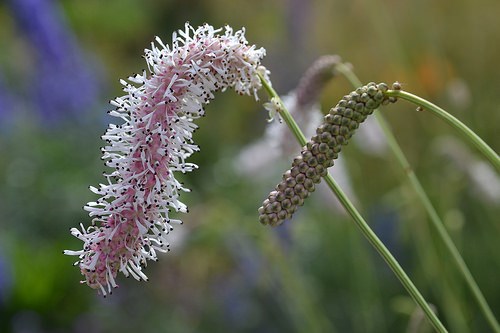 Sanguisorba ‘Raspberry Coulis’; the name is enough to sell it, but Brian and Steph describe this as ‘rather special’, with warm maroon flowers on strong stems. Long flowering, to 1m tall. 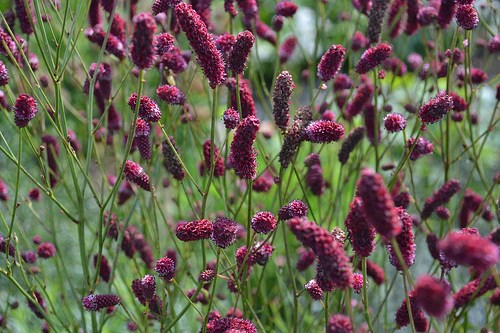 Brian and Steph Ellis, from Avondale Nursery, near Coventry, hold a National Collection of Sanguisorba as well as Anemone nemorosa and Symphiotrichon nova-angliae. Their nursery and Library Garden are well worth a visit through the season. Full details of their opening times and range is available at www.avondalenursery.co.uk

Kim and Rob Hurst’s Garden at Field House, near Tenbury Wells in Worcestershire, is open by appointment for garden groups and also for NGS. Details at www.thecottageherbery.co.uk/thegarden/ where you can also e-mail for an information pack.