This wonderfully architectural shrub, native to Africa and Madagascar, holds hidden delights and is far more forgiving than you might think of our cold winters, given that its natural home is the the edges of African woodlands.

I first came across it whilst working at Hole Park; the Head Gardener there, Quentin Stark, is one of the most enthusiastic plantsmen I’ve ever met! Literally every day working there was a learning experience. One of his delights is the tropical border, laid out against the long wing that makes up the outside of the courtyard and catching the sun for most of the day.

The leaves of Sparrmannia, like most members of the Malvales order have a fine, felty down on them. This can cause some people discomfort as it can be a bit itchy if you get too personal with it. As I was the smallest member of the team it was my job when moving the plants indoors to firm the compost in around the roots. I can assure you it can get a little tickly!

The flowers are held above the leaves in clusters of 10 to 20 and open in succession. With pure white petals reflexed back and a halo of golden stamens topped ruby, you’d think that was enough to get you to rate this plant, but being beautiful wasn’t enough for this amazing example of flora. 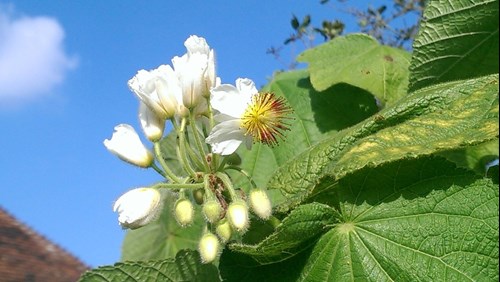 The most exciting thing about this plant is that it will react to being touched!

This bizarre adaptation is called haptonasty; the flowers will react by opening out their stamens like welcoming arms to passing pollinators (or your finger if you brush them gently) at a speed that is visible to the naked eye. It’s believed this helps to spread pollen on passing insects but also begs the enquiring mind to ask exactly how intelligent a plant can be. Naturally this could just be down to a series of chemical reactions, given that the plant reacts to a finger as much as a bee . A lot has been done into exploring the intelligence of plants and their ability to communicate in the last few years and I’ve been reading a lot on this so apologies if I’ve wandered off topic!

As with a lot of plants from the southern hemisphere, the books say that its predilection is to flower during the winter months but if happy it will flower almost continuously throughout the summer months too. I’m not sure Sparrmannias have read the books and I’m not going to tell them! 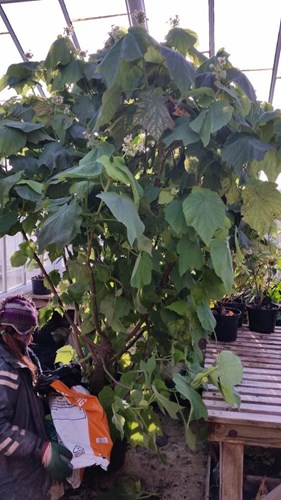 In late October most of the plants will be lifted into the unheated glasshouses & potted up for the winter, to be brought back out in early spring. The books will tell you it can withstand lows of 7°C (45 °F), I’m pretty sure ours went lower than that but were kept on the dry side, which I always think helps.

Sparrmannia is named after the Swedish naturalist Anders Sparrman, who joined the crew of Captain James Cook on his second circumnavigation of the Earth. It was first recorded in the late 1700’s & for a long time was a very popular houseplant, giving it one of its common names ‘indoor linden’ (others include African hemp and Cape Stock Rose). A rather surprising choice given it can grow up to 6ft a year! Its ultimate height is 20ft but doesn’t mind being cut back hard… which I guess was handy for those first intrepid houseplant growers. These days you’re more likely to see it being grown in experimental tropical borders and at botanical gardens.

There are two interesting variations I’ve heard talked about but never seen, one is a variegated leaf variety, the other is a double flowered version. I imagine though that the double flowered variety loses its capability to move in that fascinating manner? I shall keep searching and when I find out I’ll let you know.

Lou Nicholls is Head Gardener at Ulting Wick, a private garden in Essex that opens for the national Gardens Scheme, and also writes and lectures about gardening.