Helena Gerrish tells the history of the wonderful house and garden at High Glanau Manor. - 22 May 2015 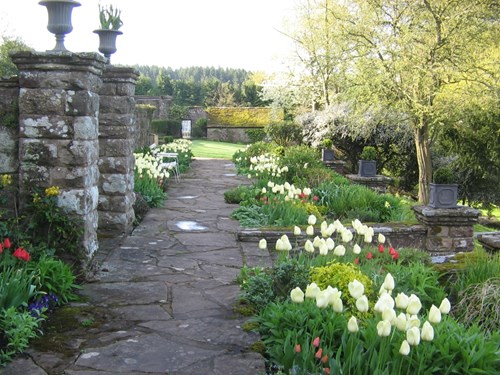 Words can hardly express how I felt when I first saw High Glanau in 2002.  A perfect Arts & Crafts house, set on a steep hillside above Monmouth with its spectacular views over the Vale of Usk towards the Brecon Beacons.  I had vaguely heard of Henry Avray Tipping (1855-1933) who built the house in 1923, as for over 50 years I had been an avid reader of Country Life magazine.  Only later did I discover that Tipping had lived in Monmouthshire, in three different houses, for nearly 40 years and that he was the Architectural Editor of Country Life magazine from 1907 until his death in 1933. His weekly article, and large oeuvre of books on country houses and their gardens influenced a whole generation in the early 20th century. 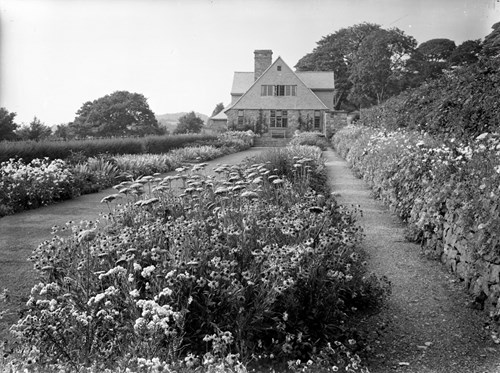 The house itself, the perfect unity of vernacular architecture with liberal use of oak panelling, the mullion windows and delightful sweep of the stone tiled roofs reminded me of houses designed by Edwin Lutyens, but in fact was a collaboration between Tipping and a young Chepstow architect Eric Carwardine Francis.    From a charming garden room (Tipping loved an outside loggia where he could eat whenever the weather was clement) I surveyed the upper and lower western terraces and the octagonal pool below from which a flight of moss covered steps led to the wild garden in a wooded valley.  Hidden beneath ivy and brambles, a rustic path winding under species rhododendrons led me down to the remains of an old grist mill and a stream which meandered between ferns and Rodgersia, which live in the shadow of ancient oaks and cherry trees.   Returning to the formal garden, I found to the south, a four bedded plat with a rustic stone tank set into the wall with steps leading to a swimming pool surrounded by concrete and lamp posts.  Beyond were nut trees obscuring the remains of a pergola with four huge cylindrical columns set against a high shaped wall.  Through a gate in the wall, there was a dilapidated forty foot glasshouse with beaver tale glass and cast iron ratchets which opened all the windows.

Although there was no herbaceous planting left in the garden, the romantic back bones were there beckoning me to find out more. Owing to my children leaving home for university I acquired a new found freedom.  Realizing my good fortune in inheriting such a garden I embarked upon  a garden design course, signed up for the Royal Horticultural Society courses in horticulture, and began my gardening career.   I contacted Country Life picture library to find out whether they had any photographs of the house or garden, and found they had 24 glass plates which they could print for me.  Eventually a brown envelope arrived with marvellous images of a perfect Edwardian garden, huge herbaceous borders with a grass walk between, terraces planted with  drifts of peonies, poppies, iris and achilleas softening the hard architectural lines, woodland walks with azaleas and rhododendrons sweeping down over the steep stone path leading down to the stream garden. A fernery, primula beds informally planted along the waterside, a hydraulic ram which sent water 200 feet up the hillside for the water features in the formal garden. 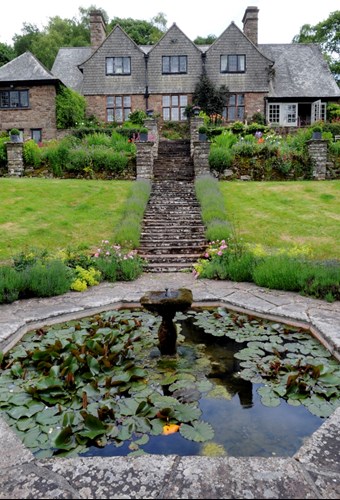 I started by removing 8 conifers planted around the pool and the hedges that lined the western terraces.  I became determined to restore the garden to its former glory.   In 2008 I removed the swimming pool and put back the 100 ft. double herbaceous borders that Tipping called his ‘ribbon parterre’. As well as restoring the pergola, with the help of a grant from CADW, I added a plaque to commemorate Tipping.  We painted the Messenger greenhouse and pruned Tipping’s original vine planted in 1923. We uncovered the old pathways and steps winding through the upper woodland gardens. 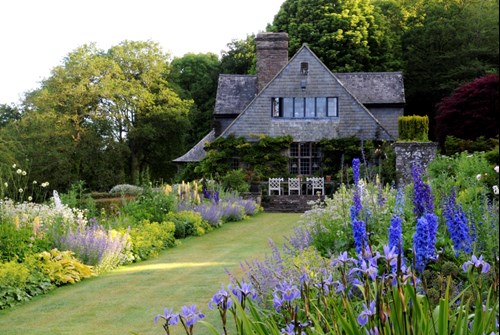 The more I worked in the garden, the more intrigued I became with the man who created such a paradise.  I found he had written many important books - nine huge volumes on country houses, books on furniture and wood carving, a book on garden history and a practical garden book, as well as the garden column for the Observer and Morning Post.  I slowly bought those books on the internet and in old book shops, and began to research the story of his life.  By now I was so interested in Tipping that I went to Bristol University to take a Masters degree in Garden History, writing my dissertation on the life and work of Henry Avray Tipping. 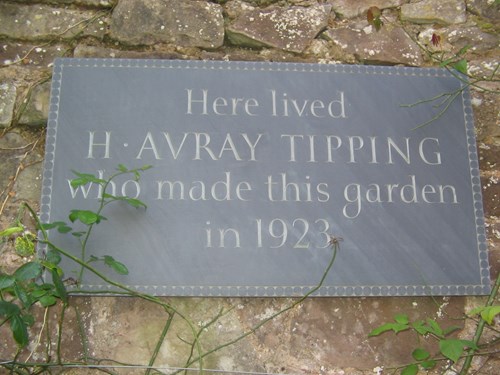 The house filled with archives, books, census forms and photographs, as I visited everywhere he had lived and each garden he had designed , discovered who his colleagues were and  learnt of his close friendships with William Robinson, Gertrude Jekyll and Harold Peto,.  I spent a fascinating day at Chequers where he designed the garden, I interviewed a relation of the coachman that Tipping employed at the time he was restoring  the medieval Mathern Palace near Chepstow in 1895.  I learnt of Tipping’s restless nature which led him to build the imposing Mounton House just before the Great War, where he entertained such dignitaries as Lloyd George and Stanley Baldwin. My disappointment in discovering that all his papers had been burnt on his death did not deter me from finding letters, photographs and hundreds of articles. 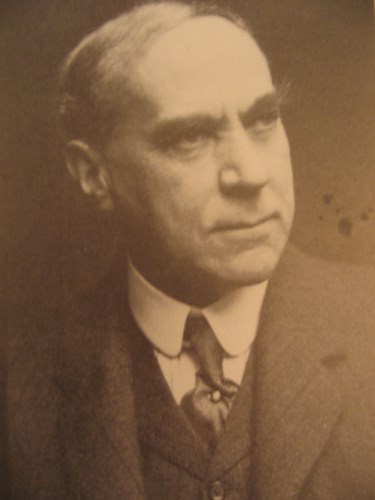 The most exciting discovery was Tipping’s own 1908 diary documenting his social life in London with Edward Hudson the owner of Country Life magazine, lunches with Lutyens, ‘tea and warmth’ with Miss Jekyll at  Munstead Wood and  his visits to most of the great country houses in Britain, which led to his authoritive articles.  I was smitten by Tipping and living in his last Welsh home I was lucky to be able to carry his mantle through the restoration of the house and garden, and be commissioned to write a book on this talented man, a much respected academic who was a major influence on the history of taste, who definitely needed rescuing from obscurity.

High Glanau is the culmination of Tipping’s lifetime experience of architecture and nurture of the landscape. 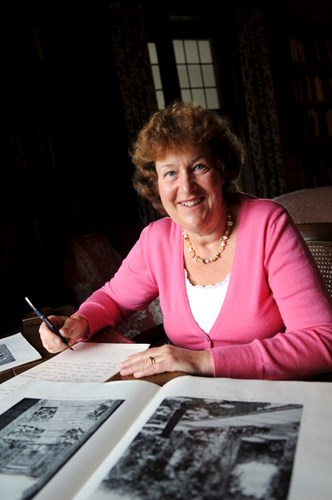 Edwardian Country Life – the Story of H. Avray Tipping by Helena Gerrish is published by Frances Lincoln, price £35 and is liberally illustrated with photographs of Tipping’s own houses and gardens as well as his commissions for others, notably at Chequers, Dartington Hall and Wyndcliffe Court.

The gardens at High Glanau Manor are open for the National Gardens Scheme and for the Rare Plants Fair on Sunday 31 May 2015 from 11-4, and also by appointment contact: helenagerrish@gmail.com