In his second article, Bob Brown talks about nerines, planting poppies and primulas, and on great gardens to visit this Autumn. - 09 September 2016

Say it how you will, ner-eee-nee, ner-eye-knee, ner-een, they’re still one of the plants that make us feel better.  You don’t have to grow them merely catch sight of a front- garden coruscating pink in the autumn gloom as you go to pick up someone in the car.  Hardy kinds based chiefly on Nerine bowdenii can flower as early as August in ‘Wellsii’ but I associate them with Christmas shopping (which I have done - once)  it must have been late November at nightfall.  There is even a variety that flowers after Christmas if the winter is mild enough - ‘Pink Triumph’. 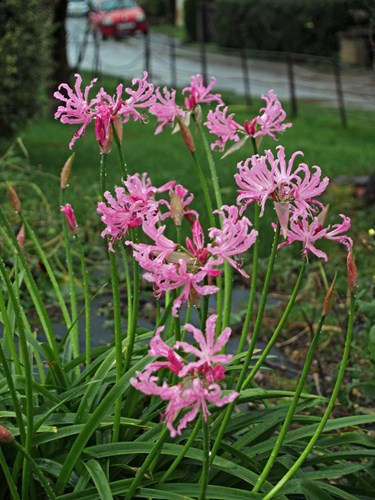 They are bulbous plants that grow leaves between April and August, flower in the autumn and are dormant for the winter.   They don’t need to be planted against a warm wall.  One National Collection has them amongst other plants in a field without any buildings.  They do like sun on their necks – so keep adjacent plants back.  When they get too congested lift and replant the biggest bulbs and give the rest away.  Do it just before growth starts in early spring.  This is not only the cheapest way to get them, it’s the only way to easily establish a population.  If you buy them commercially as dry bulbs they’ll probably need mollycoddling in pots of peat-free compost for a year or two before planting out in the garden. 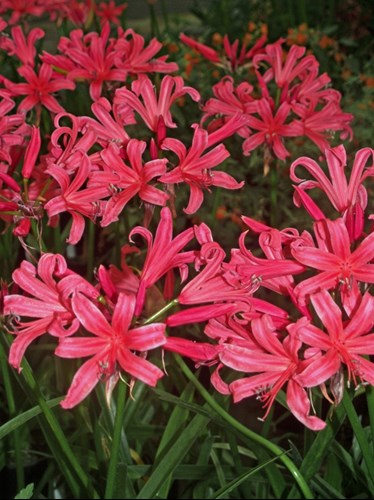 I was touring the large Shropshire collection that belonged to the late Margaret Owen with a group of people who were known to be snowdrop-enthusiasts.  They had the cheek to say (loudly to each other, several times), “They’re all pink!” which is true and only the nerine equivalent of a galanthophile would notice the different shaped flowers and colour intensities.  Their times of flowering are much more important.  Ideally I’d mix an early, a late and a mid-season kind together in one patch.  If they show any colours other than pink or white they’re varieties of Nerine sarniensis, which are not hardy.

Now (September) is the time to plant primulas and poppies.  Most of these behave like Mediterranean plants that use the first real moisture of autumn to break into growth then grow all winter whenever the temperature is mild enough.

Oriental poppies which in reality are a group of complex hybrids of several Middle-Eastern species aestivate in summer and grow from September onwards.  Autumn is definitely when you should plant them.  Dig a bigger hole and put a late-appearer in the same hole.  Each will occupy the space that the other leaves when it goes dormant.  I’d use Eucomis as the late appearer.  In dry shade I’d plant Papaver spicatum and use Begonia sutherlandii as the late appearer.  The begonia will provide that rare thing – autumn colour in dry shade.  September planted Papaver rupifragum will repay by flowering all winter if it’s a normal one and then flowering as normal for the following year.  Even annual poppies prefer autumn sowing.  I save and scatter seed of some of the redder kinds (the British Papaver rhoeas is too orange for my taste).  Currently I’m using Papaver palestinum (slight and brilliant red), Papaver commutatum (the ladybird poppy with red and black flowers) and Papaver guerlekense from seed originally collected in Bulgaria on the Turkish border 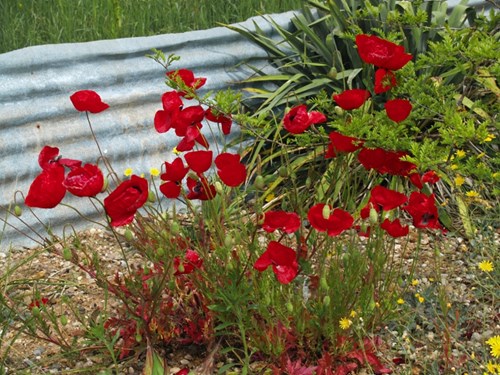 Conventional wisdom about when to divide and replant primroses and polyanthus is after flowering just as summer begins to dry them up.  Conventional wisdom is often wrong – it certainly is this time.  Primroses and polyanthus should be planted or replanted between September and February – preferably at the beginning of the period.  Ordinary primroses might repay by blooming from October onwards finishing with a flourish in spring.  If this is what you really want there are a few cultivars that can be relied on to bloom from October onwards – blue in ‘Tie Dye’ and primrose-coloured in ‘Vanilla Cream’.

Places to Visit in September

Old Court Nurseries, Colwall, near Malvern, which specialises in Michaelmas daises, is a must for September and first half of October.  Nowhere else will you see such a wide range of Michaelmas daisies so incredibly well kept.  Take a notebook and a camera and plan to destroy and replace some of the also-ran plants in your garden (dare I mention ubiquitous Geranium 'Hollywood' and Centaurea montana) with some zestful asters.  Currently they are hosting an RHS Trial of New England asters (Symphyotrichon novae-angliae) which should be worth perusing.  If you have space, remember to plant some simply for cutting.  Daily, 11am till 5.00pm.  Visit early in the day and take lunch at The Chase Inn.

Belgium seems to exist for few natural reasons.  There is no unity of language or geography.  Yes, it has disturbingly good chocolates but so does Holland and can you really define a nation on its love of chips dipped in mayonnaise?  Garden design may be its sole unifying characteristic and its distinctive gardens fail to cross borders into France, Holland, Germany or Luxembourg.  Box hedging is used remarkably, - everywhere.  Go to www.europesetuinen.nl/tuinen-uk-belgie.htm which lists the most typical, less grand, more intimate and personal gardens (as well as some bigger ones).  I have visited some of these but looking carefully at the website I want to recommend them all and make another visit!  Take your car on the train under the sea, or travel from St.Pancras without your car. 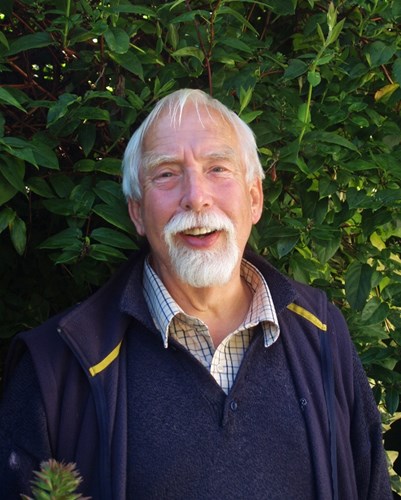