Laura Willgoss, from Wildegoose Nursery, tells the story of how they found and restored the Walled Gardens and Greenhouses in Shropshire that are now home to their nursery. - 21 July 2017

In 2013 my husband and I took on a restoration project of an old derelict Walled Garden and over the next 5 years would be involved in its many ups and downs before its final completion this year. It had been our dream project from when we had met and fallen in love as trainees at RHS garden Wisley - all very romantic. 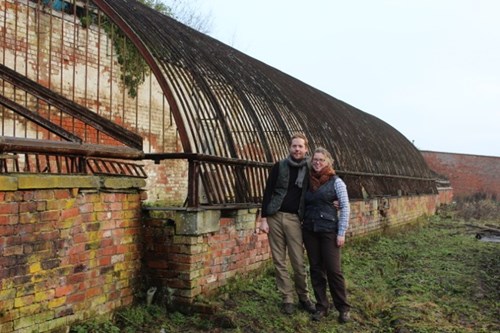 We had started a small specialist nursery the year before in 2011, taking on the Bouts Viola Collection of over 150 different cultivars of hardy perennial and scented violas from retiring nursery owners Mark and Stephanie Roberts. We set up in a section of a farmer’s field, that flooded repeatedly and was so windy that we had one day returned to discover our polytunnel upended and splayed out like wriggling woodlouse on its back in next door’s garden. After that first year it was clear we needed to find a new site and the dream of a Walled Garden with its sheltered, enclosing walls and gently sloping south facing aspect became all the more appealing.

We got out the Ordinance Survey map and, utilising the all seeing and all knowing facility that is Google Earth, we scoured the local area for country estates with potentially vacant walled gardens. We sent letters to the proprietors, outlining our grand plans, and the responses we received were mixed: from gratitude to think somebody might like to come in and take responsibility from their overgrown derelict plot that hadn’t seen a gardener let alone a vegetable for over half a century, to those who politely declined the prospect of a public garden being created in the middle of their private estates, threatening their splendid isolation with the visiting local riff-raff.

Of all the responses we received we could not get hold of one estate in particular, whose Walled Garden appealed to us the most. Not only was it just down the road, but also on Internet searches appeared to house the most extraordinary, if derelict, range of curved iron framed glasshouses. It was at this point on a sunny afternoon in late summer, when walking the dogs down the lane, that fate lent a helping hand. Our next-door neighbour from the Vicarage pulled up alongside, wound down her car window and politely if somewhat pointedly asked how our hedge planting was going. This was in reference to her displeasure at being able to catch glimpses of our polytunnels when hanging out of her bedroom window and peering through the 20ft tall leylandii hedge that marked the boundary of their garden. The solution we had both agreed was to reinforce their hedge with another of our own, thus doubling the thickness and creating an impenetrable barrier, even to those possessing twenty twenty vision. However with new plans to move our nursery the hedge planting was now on hold. “If only we could get hold of the local estate to enquire about their Walled Garden as a new premises for the Viola collection,” we told her. As they say it’s who you know and not what you know and never was it truer then on this occasion: as a great friend of the local estate owners with said Walled Garden, our neighbour announced with great pleasure to leave it with her and in half an hour an invitation to Millichope Park had been arranged.

Our first visit to the Walled Garden at Millichope Park was a magical experience. Like anyone who has read the book ‘The Secret Garden’ or seen the film will know, entering a Walled Garden for the first time is like entering a hidden other world, a lost paradise, and so it felt that way to us. As we approached the garden gate the owners told us they had asked the gardener to strim a path so we could at least get so far in through the thicket of docks and nettles to have a look. On entering through the old wooden door we could see 2 acres of rough grassland laid out before us and yes - a lot of perennial weeds and sapling trees, all enclosed by 12ft russet red brick walls that still looked in good condition. The garden sloped gently downwards towards a magnificent view over woods, an old orchard, pastoral fields and finally up towards Brown Clee Hill. To our left were the range of curved iron framed glasshouses, rusty and largely void of glass, but still with the odd tiny postcard sized slither to capture the sunlight. We only entered and left by that one strimmed path - it would have been impossible to get to anything else, but in the spirit of adventure and swept along by the romance such scenes of dereliction can stir -we couldn’t think of anything better to dedicate our lives to then restoring this romantic ruin and bringing the surrounding garden back to life and bountiful productivity. 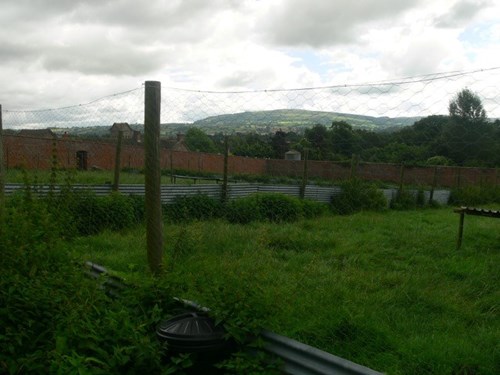 We moved in over December of 2013 – upholding the previous year’s Christmas tradition of putting up the nursery polytunnels on Boxing Day, when all the family could be roped into the arduous task.  Once the nursery had been set up we turned our attention back to the restoration project. We had cleared the glasshouses of the thicket of weeds and now it was accessible we invited along two glasshouse experts to take a look. Garden historian Fiona Grant and archaeologist Jeremy Milln came and with great excitement declared the Millichope glasshouse to be a very special glasshouse indeed and hoped we might try to restore it. With the support of the estate owners such an undertaking was agreed - if we could secure grant funding.

Achieving grant funding was an unknown challenge for Jack and I, and it was a very useful process to go through. It forced us to clarify our grand plans and romantic visions and to put together a viable business plan on how the restored glasshouses and garden would be utilised, should a grant be given. There were a lot of criteria to be met and it was a long and time-consuming process to ensure we fulfilled them, but in the end we were successful and suddenly we were no longer talking hypothetically about restoring a Walled Garden: it was really going to happen.

Once the contractors had been appointed work began slowly. Rather than a team of skilled builders and artisan craftsmen appearing at the gates to commence work immediately, one sole builder appeared. ‘Lofty’ is how he liked to be known and for months he cut a lonely figure, tasked with momentous job of grit blasting the entire rusty frame work before priming and painting could begin. His extraordinary persistence and good humour are commemorated by his own gloriously illustrated glass pane, in which he has inscribed his own coat of arms and date. It was unfortunate that his first effort at a commemorative plaque was produced in portrait when, as his boss pointed out, all the other panes of glass in the glasshouse were positioned in landscape, a detail momentarily forgotten. 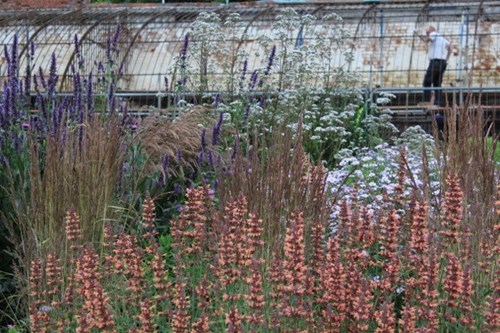 Finally the cavalry did appear and the project was a buzz with builders taking down and rebuilding supporting walls that had bulged; repointing brick work; blacksmiths were recasting sections and the whole frame was being primed and repainted ready to be reglazed. Progress was good but it was not to last. The glass for the glasshouse was yet to be seen, as indeed were the glaziers and just like any good episode of ‘Grand Designs’ we had hit a stumbling block. Many of us will have experienced taking on a project that we later regretted and for the glaziers this must have been the case. Just how they would manage to attach 12,000 postcard sized slithers of hand blown glass over a curved metal framework, with no clips and only the tiniest slither of putty was a mystery - so much so that for months they avoided attending site altogether, perhaps in the hope they would never have to work out the solution. However in the end they managed it and used tiny removable sticky squares to hold the panes in place whilst the putty set off. With the glass reinstated the glasshouse stood once again as a glittering masterpiece to the rest of the Walled Garden. 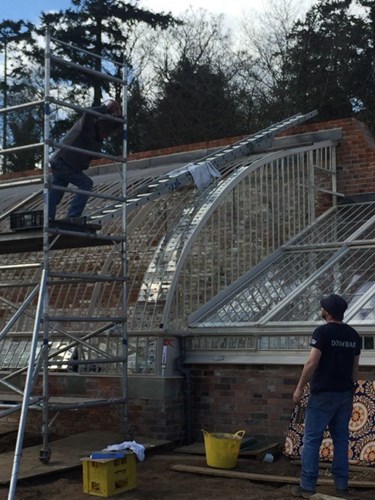 Now the glasshouses have been restored what should we do with them? Their original use when they were built in the 1830s, is thought to have been to grow pineapples and grapes, memorably referred to as a ‘pinery vinery’. However Jack and I were not hidebound to any faithful historical use for these magnificent structures and have decided to leave the pineapple growing to Mr Delmonte. There is an important place for restoration projects that faithfully recreate a garden in time, but as young horticulturalists we wanted a project that celebrated the old and the new and didn’t limit us in any way. We want to grow all the edible crops that we actually want to eat – tomatoes, aubergines, peppers and herbs and salads galore, early forced strawberries and peaches and figs on the back walls, and then to fill the rest of the space with ornamentals – forced bulbs and tender climbers, succulents and exotics, and finally allow space for visitors to come and linger, to sit surrounded by a jungle of plants and either take part in  courses, or just linger over a coffee and a back copy of 'Gardens Illustrated' or the newspaper, whilst eating delicious lunches from the surrounding abundance of produce.

Walled gardens are such magical spaces where time can stand still and nature in all its vibrancy and fecundity can be enjoyed. It is therefore wonderful to see in recent times so many being brought back from their long slumber and cultivated once more into productive use. ‘Living the Dream’ suggests a whimsy and romance which is far removed from the very long hours and seven day weeks that we have to work to run a nursery business, but hard work has its own rewards and, as a fellow nurseryman, friend and walled garden tenant Mark Zenick always tells me, Paradise is derived from the Persian word for Walled Garden and who can beat working in Paradise! 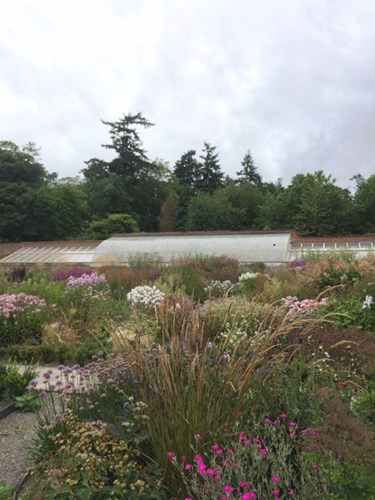 Laura and Jack are specialist growers of hardy perennial violas, as well as interesting and unusual perennials and grasses, at their nursery, Wildegoose Nursery, based in a wonderful walled garden in Shropshire.

Article and all photos copyright the authors.