Chris and Lorraine Birchall, from Tale Valley Nursery, with some suggestions for keeping the colour going in your shady borders through the summer. - 24 June 2018

The peak time for shade-tolerant plants in the garden is spring; this coincides with the rise in temperatures, increasing day lengths and, in the natural environment, lack of competition for nutrients and moisture from trees which break dormancy later in the season.

The onset of summer and higher profile of sun-loving perennials does not mean shady areas in the garden should be forgotten and uninteresting, indeed there is nothing more relaxing on a hot summer’s day than sitting in a shady corner of the garden. There is a wide range of shade tolerant plants which will grow in such locations to add to the enjoyment of the moment. 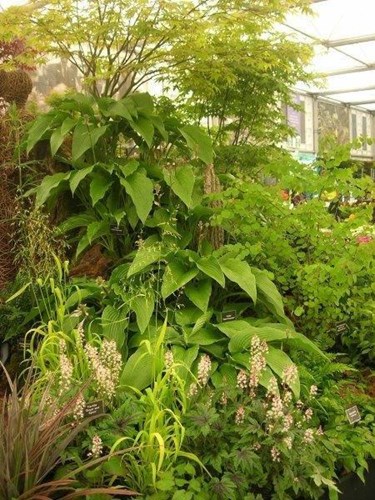 Evergreens provide structure in the garden and all year-round interest. Ferns are associated with shade and provide contrasting foliage which enhances other plantings, not all ferns require moist conditions and many will tolerate drier conditions. Our own native Polypodium vulgare, Asplenium and several species of Dryopteris are all suitable for dry shade providing they are nurtured until established.

Beesia calthifolia is a clump forming member of the Buttercup family which has glossy heart-shaped leaves and small white flowers throughout the summer months, as with many Ranunculaceae it requires moist conditions. A plant more tolerant of dry shade is Pachysandra terminalis, this is often seen as groundcover in Local Authority plantings and has glossy evergreen leaves, there is also a variegated cultivar which helps lighten up a shady area. Podophyllum ‘Spotty Dotty’ and sister cultivar ‘Kaleidoscope’ are what are termed as ‘semi-evergreen’. This term means in a cold winter they will probably loose their foliage but in a mild one stay evergreen. They require moisture in the growing season but good winter drainage, this is best obtained by adding plenty of organic matter to a soil which helps open up a heavy soil but adds body to a sandy one. The flowers of Podophyllum are often held below the leaves so consider planting them where they can be seen from below. 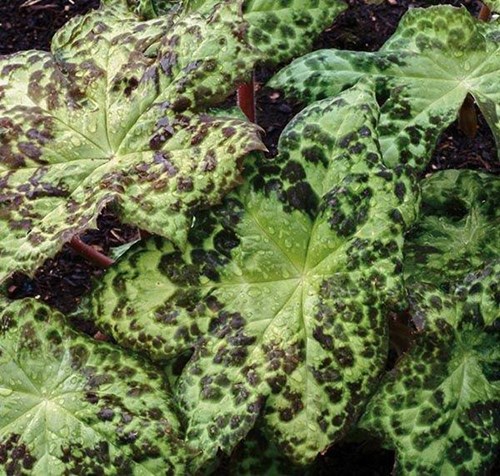 Strap-like foliage adds contrast to the more commonly encountered feathery or rounded leaves and there are a number of these which are shade tolerant. The most well know is possibly the deciduous Millium effusum, or Bowles' Golden grass as it is commonly known. Beware, however, if planted in too deep shade it will lose its golden colour and in too much sun will scorch. An added bonus of this plant is that it is also tolerant of dry shade. The New Zealand Astelia will also tolerate some shade, in particular Astelia chatamica which has evergreen silvery sword-like foliage. It will grow up to a height of about 1 metre with a similar spread.

The colour yellow for flowers is generally associated with spring and following this the hot borders in summer. Patrinia is a little used genus originating from Japan requiring moist soils. The corymbose flowers start to open in late June and persist through until August. The species P.triloba var. palmata is low growing to about 30 cm., whereas the taller P. gibbosa has good autumn colour. 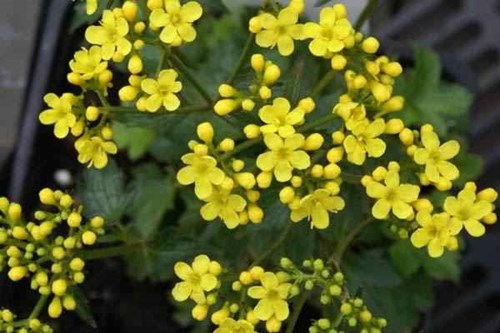 Most Thalictrum are meadow plants but there are some choice woodland species. Thalictrum kiusianum from Japan is a prostrate grower to 15 cm with lilac flowers which combine beautifully with Patrinia. The taller Korean T. filamentosa has frothy white flowers. Other shade tolerant Thalictrum include T. aquilegiifolium and T. urbainii.

Lilies are generally considered to be plants for sunny aspects although there are several good exceptions which generally flower in early summer. Lilium martagon, a Turk’s-Cap lily up to about 60 cm. in height is one of the most reliable, there is now a vast array of colours available of this plant although the white flowered form ‘Alba’ stands out in a shaded area. Lilium mackliniae, L. pardalinum, L. superbum and
L. michauxii all come to mind as suitable for growing in shade. 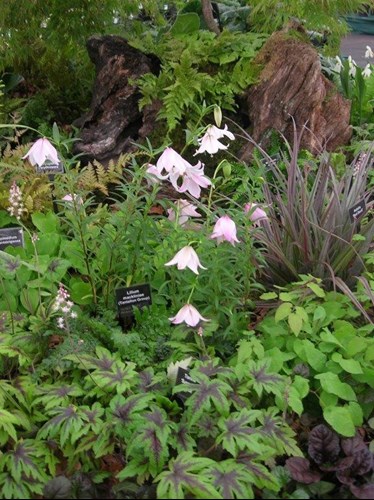 Of the hardy orchids Epipactis are probably the easiest to grow and most readily available. Epipactis gigantea requires light to medium shade in moist soils where it will spread happily and achieve a height of up to 90 cm. The prettiest Epipactis is probably the shorter Epipactis palustris with creamy flowers marked with maroon.

Roscoea herald from Nepal, India and China. Often confused as being Iris or orchids they actually belong to the ginger family. The earlier flowering R. cautleyoides are probably the more commonly encountered along with R. beesiana which flowers in July. However recent breeding of R. purpurea has led to some lovely flower colours ranging from shades of red through to pink and purples. They start flowering in late July and go though until September. Foliage colour is also variable from green to purple with differing stem colours. Some plants produce good autumn colour. The key to growing them is good drainage. A choice genus which should be included in every garden. 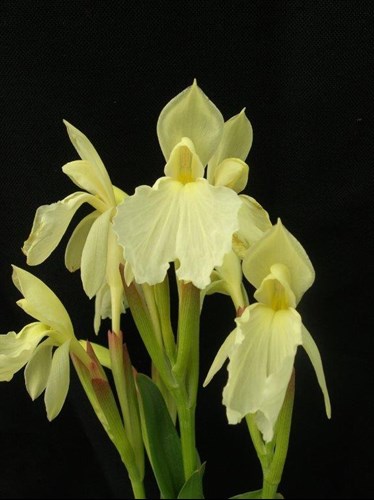 The North American Trautvetteria is reminiscent to Thalictrum. Growing to 1 metre in height with its white branched tasselled flowers it provides structure and the appearance of coolness to a shady area. In contrast the shorter Lychnis cognata has bright orange flowers and combines beautifully with Trautvetteria it does however need support as it can be weak in the neck. 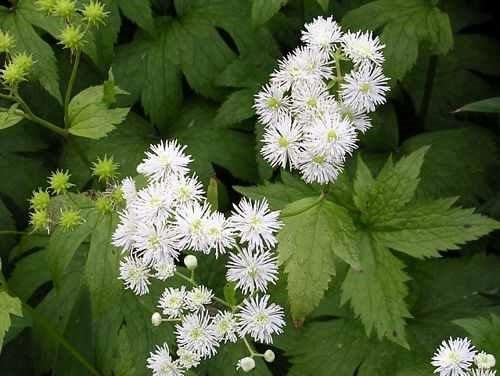 The Toad Lilies (Tricyrtis) is a late flowering genus which requires some cultural care but is well worth the effort. Native to the Himalayas in Nepal, China, and through to Japan they must have water during dry summers and an open soil with plenty of organic matter and good winter drainage. The more readily available species such as T. stolonifera and T. formosana will grow up to 80cm. in height having pale pink to purple flowers with spots of darker hues. Beware they are prone to slug and snail damage when they first emerge. There are lesser known yellow flowering species T. ishiana grows up to 20 cm. with an arching habit which we have found resents drying out.

A choice woodlander which requires a moist soil in shade is Anemonopsis macrophylla which heralds from Japan where it is rare in the wild. This has nodding, waxen flowers, light lavender in colour which start opening in late June and continue right through until August. The cultivar ‘White Swan’ has white flowers and generally comes true from seed. The attractive pinnate foliage emerges early in the spring. We have used Anemonopsis in our RHS displays at Cardiff in April and Hampton Court in July which illustrates its value over several months in the garden.

Kirengeshoma palmata also comes from Japan and is a plant offering structure to a garden. As the name suggests it has palmate leaves and waxy bell-shaped yellow flowers in mid to late summer. Growing to over a metre in height if given a damp soil. It does however resent disturbance once established. 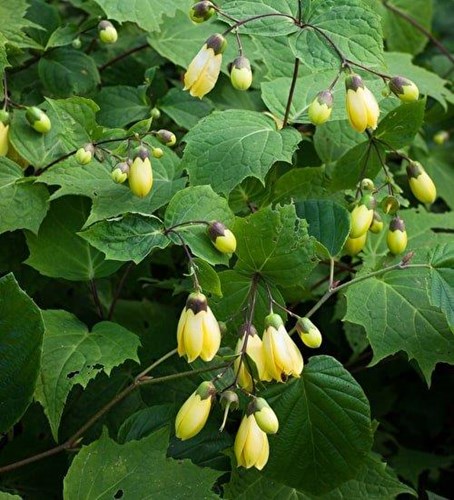 Begonias are generally considered to be house-plants although in recent years several hardier species and cultivars have been introduced into cultivation. Some of these have proven to be less hardy than claimed, however Begonia grandis subsp. evansiana is a reliable doer for cool, preferably moist shade. In addition to its pink flowers (white in the form ‘Alba’) in late summer its foliage provides an exotic touch to the garden in cultivars such as ‘Claret’ the backs of the leaves are a rich crimson colour. It also produces small bulbils in the leaf axils which will spread around the garden although their shallow rooting nature means they are easy to uproot and never a problem. 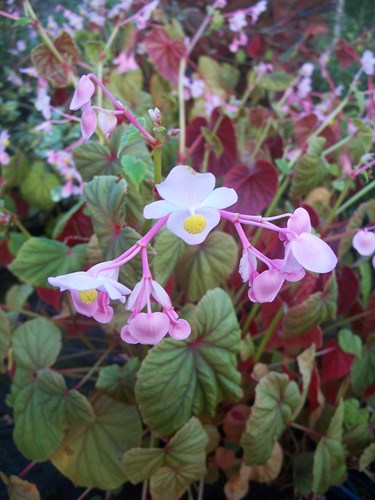 We have left the best till last Cyclamen hederifolium is a plant which should feature in every garden, a heralder of late summer / early autumn it flowers from August until October in various shades of white and pink then the flowers are followed by its ivy-shaped leaves with various markings which are just as beautiful as the flowers, the leaves then persist through until May. It is very tolerant of dry shade and will even grow under beech trees if tended in its early years. Beware however of the ‘Hardy Cyclamen’ sold in many garden centres. Although their colours are more vibrant they are not reliably hardy and although fine as a basket or trough plant for a year or two they soon dwindle if planted out. 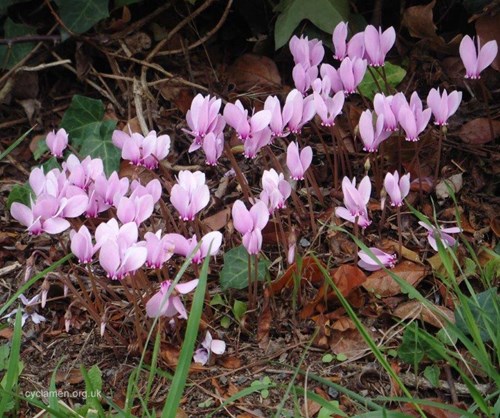 We hope that you have found some of the above information of interest and are able to add some of these plants to your garden to provide summer interest in those shady spots.