Colin Moat, from Pineview Plants, picks his favourites from this fascinating genus. - 24 May 2019

I think the first Thalictrum (common name of Meadow Rue) that caught my imagination was Thalictrum delavayi ‘Hewitt’s Double’ which is ironic really, as I have had it die on me in about 3 different gardens. A ‘buy to die’ plant in my view, unless you have those classic conditions of ‘moist, free draining soil’ that the RHS seem to suggest quite regularly. I suppose my free draining green sand is just not good enough! Happily, most other Thalictrum are much less temperamental than this one!

Ones I have had success with, however, include Thalictrum flavum ssp glaucum, with its blue-grey foliage topped by bright yellow fluffy flowers, and T. f. ‘Illuminator’ whose young foliage has a yellow caste to it (not in a bad way!). Interestingly the sparseness of my conditions must have kept the first of these quite restrained, as I always thought it only got to about 5’ in a good year, but visiting gardens in lusher counties have seen it rise to 7’-8’, still looking good, but its habit was a bit waftier, and needing support, a bit of a disadvantage in my view. T. f. ‘Illuminator’ however, seems much better behaved and is quite upright and keeps the colouration of foliage until quite late in the season. 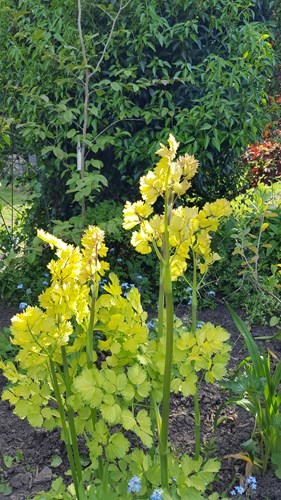 Another, easy, and probably best known form, is T. aquilegifolium which is a handsome plant, and true to its name, when smaller, I’m often asked by customers if it is an aquilegia, and I diplomatically advise them, that thinking that is quite understandable, as they are both members of the Ranunculacaea family…which confuses them even more! It is a classic ‘see through’ plant and can be possibly be planted anywhere in the border, and with its self-seeding habit in some gardens, the plant will elect to do just that! With its fluffy flowers of white, pink, purple and mauve, they are an easy and elegant plant. A good named hybrid of this is T. ‘Black Stockings’ which was awarded an RHS Award of Garden Merit in 2016. An AGM was also awarded to T. rochebruneanum in the same trials, which is another tall variety, and interestingly, a cross with this species and T. flavum ssp. glaucum has produced T. ‘Elin’ which was awarded an AGM too. This is the ‘Peter Crouch’ of Thalictrum, reaching 8’ even in my garden, quite robustly too, due I believe to the fact that it is sterile, adding extra flower-power. The flowers are purple-budded opening creamy-white, a tasteful contrast to its purple-blue foliage. 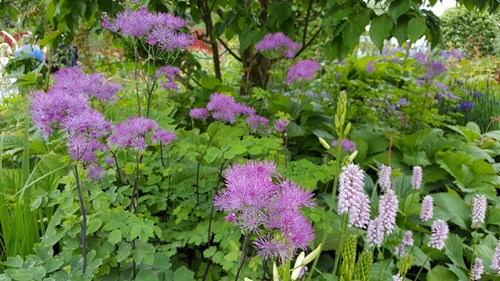 One to ‘consider carefully’ is T. minus which is a compact form of 2’ and fine foliage. T.m. ‘Adiantifolium’ is finer still, but both have Putin-like territorial ambition, I remember a quote from Bob Brown about it that ‘you should only consider planting it on a roundabout’.

My NBT (New Best Thalictrum) is an acquisition from De Hessenhof nursery (and commended to me by Hans Kramer the nurseryman) via Gothenburg Botanic Garden, and is a North Chinese (interesting route of travel!) form T. przewalski ‘HeHeHe103’ (easier to type than say!) which is the first to bloom with a long lasting white fluffy flower above very fine foliage, a mini-blizzard. These have almost exclusively been lifted off my stand (purchased! 😊) by other nursery owners, always an indication of a good plant! 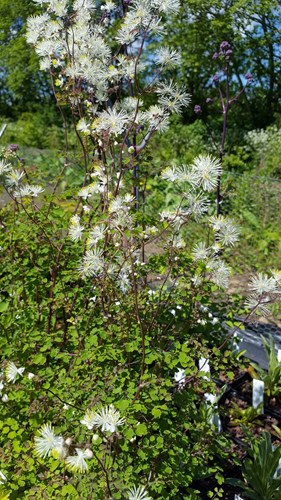 I was surprised that Thalictrum ‘Splendide’ didn’t get an AGM, as again, it is a robust plant that has a good open structure, a tallish 6’, with masses of lovely cupped (delavayi-like) pink-purple flowers, contrasting beautifully with darkish-green foliage. However, I was delighted that my all-time favourite T. ‘Splendide White’ was awarded an AGM, as I love the fine, dainty foliage of apple-green and the individual leaves are slightly folded, and then it is topped by creamy-white cupped flowers. I’m happy to be proved wrong, but although the naming indicates it is a white form of ‘Splendide’, the foliage and habit is nothing like it, the only thing in common is probably T. delavayi parentage. If I am wrong I promise to look suitably rueful! 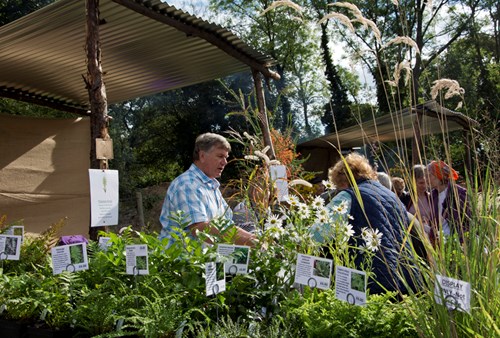