Matt Killick, from Shire Plants, on his passion for old-fashioned pinks, which is a speciality of his nursery. - 24 May 2019

My interest in Pinks was ignited when, aged 16, I left school and worked at a local plant nursery. The nursery had a collection of nearly 100 different Dianthus and I was attracted to the neat foliage, heady scent and wide variety of the flowers - and the fact that they were so easy to propagate. Some years later, I now have my own nursery and have embarked on a mission to collect and preserve as many of these old varieties as possible. Sadly, the more I collect, the more I discover have disappeared, although I wonder how many are still quietly growing away in private gardens, waiting to be rediscovered! 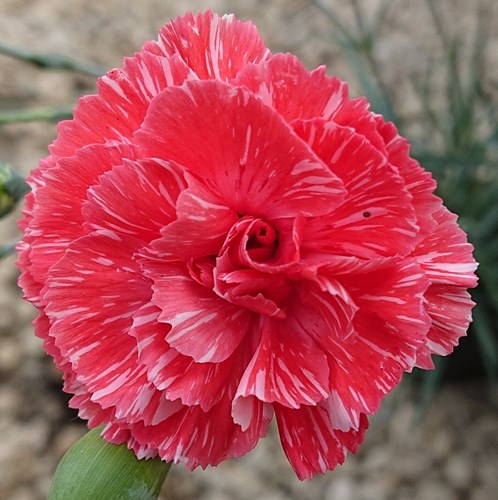 I love the rich history of the genus; they have been cultivated for thousands of years and many of the hybrids still available date back hundreds of years. Much myth and legend surrounds the Dianthus. A Christian legend tells us that pink carnations first appeared when a tear fell from the eye of the Virgin Mary, when she witnessed Jesus carrying the cross. The flower is said to have sprung up where her tear hit the ground. The pink carnation is therefore representative of a mother’s undying love and carnations are worn on Mother’s Day in the United States for this reason. 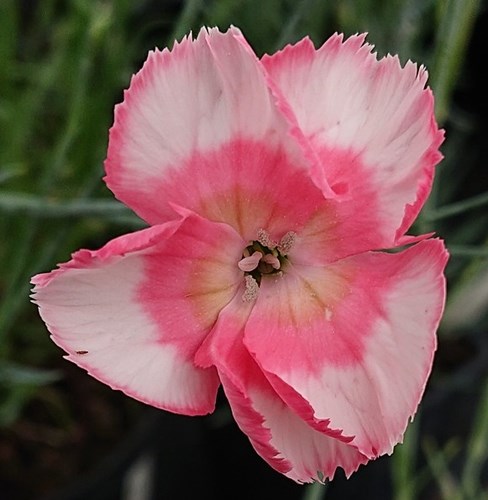 Pinks were thought to impart strength and energy and were therefore suitable to be given to someone convalescing after an illness. It was also said that spots of dye put into holes close to where carnation seeds were to be planted would cause the resulting flowers to be the colour of the dye. An urban myth states that scent was intentionally bred out of carnations at the request of funeral directors, to avoid people becoming overcome by the fragrance and fainting at funeral services, although the fact that most carnations and pinks are still highly scented appears to rule this out.

The ancient Greeks held the Dianthus in high esteem and called it ‘The Flower of Zeus’ or ‘The Divine Flower’. The word ‘Dianthus’ is derived from Dios (God) and Anthos (flower). Certain varieties have long been known as carnations because the flowers were fashioned into coronets at festivals. Another common name is Gillyflower, which is possibly a corruption of July Flower. Alternatively, it may be that Gillyflower is derived from the French 'Girofloier', meaning 'clove bearing' because of the distinctive scent.

'The fairest flowers o’ the season

Are our Carnations and streak’d Gillyflowers.'

Even the cultivar names are interesting; many are named after people who are long gone and forgotten: 'Alice', 'Dad’s Favourite', 'Franks Frilly', 'Lady Granville', 'Mary’s Clove', 'Mrs Sinkins', 'Sam Barlow', to name just a few. Some are named after places: 'Fountains Abbey', 'Hidcote', 'Inchmery', 'Paddington', 'Sweetheart Abbey' and many others. Other names in some way describe the flower: 'Crimson Clove', 'Dainty Lady', 'Laced Hero', 'White Ladies' etc. Whatever the name, when I’m writing a label for an old variety, I can’t help thinking of the gardener long ago who was excited to breed, or discover, a new variety and share it with his or her friends. How much more difficult it must have been before the days of Facebook! 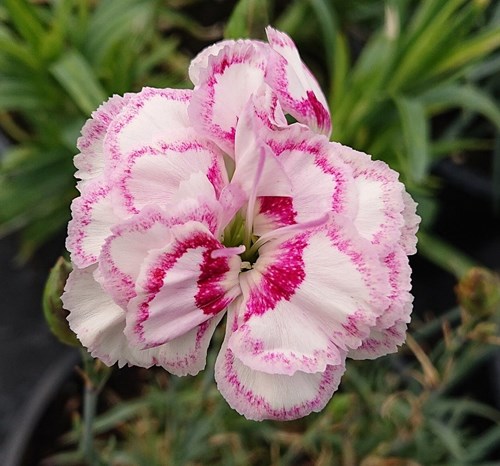 Unlike some plants, there is not a wealth of herbal uses for Dianthus, although it is thought that the Romans put the flowers in their wine to add flavour. Gerard mentions a conserve made of clove-scented pinks which “doth comfort the heart”. He goes on to note that pinks “are not used in Physicke, but esteemed for their use in Garlands and Nosegaies.”

There are many species Dianthus available to us and these are the ancestors of the hybrids we know today. Although not often sought out by gardeners, they do have something to offer us. The flowers of species have a simple beauty, usually only five petals, often with serrated edges and uncomplicated colour patterns. They tend to be robust and easy to grow and are useful stalwarts in the garden. 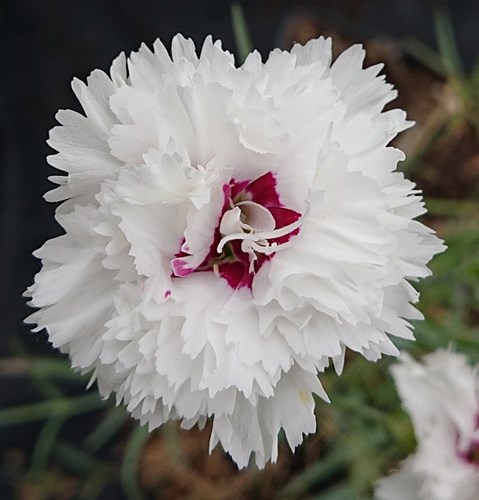 A popular selection are the laced pinks, the earliest of which date back to the 18th century and were an instant hit at the time. In 1772, an English gardener named James Major noticed an unusual flower among a batch of seedlings he had grown from seeds he had collected from pinks the previous year. Its edges were threaded with the same dark colour that decorated the centre of the flower. He was offered an enormous ten guineas for the plant but refused, instead propagating it himself and selling them for a great profit. He named it ‘Duchess of Ancaster’ after his employer and spawned a fashion that lasted well into the 19th century. Sadly this first laced pink is one of the many that have become ‘extinct’. Today, laced pinks such as ‘Dad’s Favourite’, ‘Greensides’, ‘Laced Joy’, ‘Laced Monarch’ and ‘Laced Mrs Sinkins’ remain very popular.

Despite having been such a favourite since Tudor times, it is unfortunate that so many wonderful old pinks should have been lost to us. Indeed, there are hundreds of named varieties in old nursery catalogues which are sadly no longer commercially available. As mentioned above, at Shire Plants we are doing our best to preserve all the old varieties we can find and if you have a variety which we don't have, from which we could take a few cuttings, we'd love to hear from you.

All Dianthus like a well-drained soil in a sunny position - the hotter the better. Many are good candidates for a rockery or gravel garden, or containers, but most hold their own in a mixed border too. We grow ours in heavy Buckinghamshire clay-based soil without too many problems. All are very hardy and, providing the soil is not waterlogged, come through the winter without problems. I recommend cutting them back lightly in the Spring, to encourage new growth and keep them tidy. 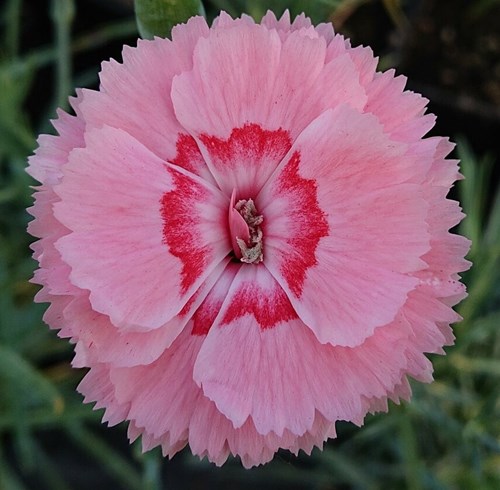 In the garden, pinks suffer few diseases and are generally untroubled by pests. Young plants may attract the attention of rabbits, but slugs give them a wide berth. Plants in the greenhouse can be affected by aphids and these are best dealt with using a mild solution of horticultural soft-soap in a hand sprayer.

Taking cuttings is one of my favourite activities and Pinks are so rewarding in this regard. Using a sharp knife, neatly cut a non-flowering stem as close to the base as you can and trim off the lower leaves using sharp scissors. My method is to dip the end of the stem into rooting hormone powder and then, somewhat unconventionally, insert into a tray of 100% sharp sand. The trays are then placed  uncovered into a bottom-heat propagator, although a warm windowsill should do just as well. Depending on the time of year, rooting should take place within 3-5 weeks.

If you haven’t yet had the pleasure of growing pinks, I would encourage you to give it a go. Start with something bulletproof like ‘Mrs Sinkins’, ‘Haytor’, ‘Gran’s Favourite’, ‘Painted Lady’ or ‘Pheasant’s Eye’ and I’m sure you’ll be smitten when you catch the heady clove scent on a warm summers evening and will soon be expanding your range! 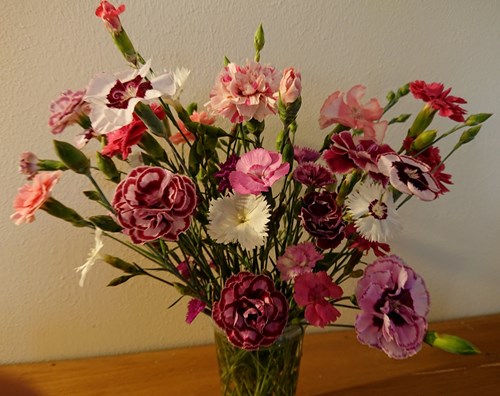 Matt Killick owns Shire Plants, based in Buckinghamshire, a traditional plant nursery which launched in 2018. Their range includes a large selection of old fashioned garden pinks (Dianthus), many of which have become scarce in recent times, and a good selection of perennial tufted violas, plus many other hardy perennials.