Not just another Allium!

People really should be growing a greater variety of edible alliums than just onions, chives and leeks! There are three very useful Alliums that are easily grown and can add so much pleasure to the garden. Not only are they useful, they are also very attractive and can add colour to any garden at different times.

I am very fond of this Allium as I have named this particular clone after my daughter.  On one of my many trips to India and in particular Mizoram, I noticed in the markets a root being sold. It wasn’t obviously an Allium at the time, but it was very popular with the locals. The form ‘Zorami’ was being grown by my wife’s family. Subsequently I identified it as a form of Allium hookeri (Hookers Onion). On other trips around SE Asia I started to realise that poorer communities were growing this anywhere they could, frequently in poor soils near roadsides as well as in small plots by their shacks/houses. In China, it was definitely the poorer farmers who grew this a crop. It thrives in poor soils and sunny locations.

We started to grow it in our vegetable garden back in 2010, and suddenly with a fertile soil, the plants grew to a great size with very wide fleshy leaves. These leaves are used as an onion substitute. In Bangladesh, it is often use to make onion bhajis. We have taken to eating the roots and leaves. 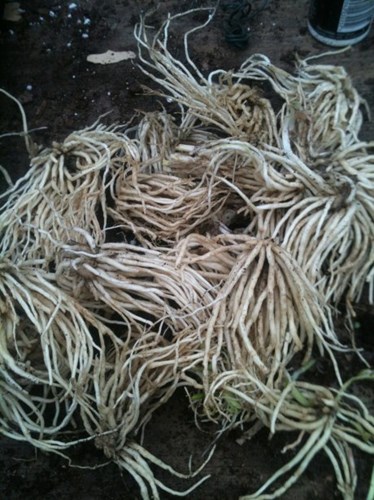 In June, first of the flower spikes appears. These are like small drumsticks and can be eaten at this stage as well. The flowers are white and continue to appear until October. It is quite unusual to get a repeat flowering Allium in the garden, and this it a very useful attribute. The flowers attract bees (honey & solitary) like no other plant in the garden; even on dull days the plants are covered. This make it an excellent choice for people interested in bee plants. With the added bonus of the long flowering season, Allium hookeri would make a better edging than chives for a herb border, giving lots of white flowers into the autumn. 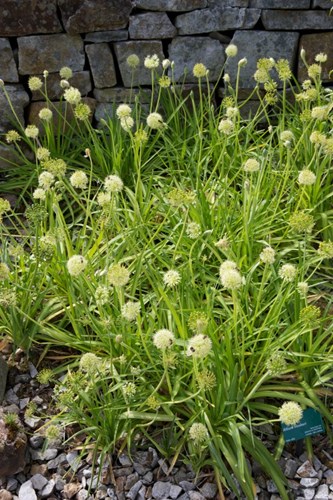 There are an number of different clones of Allium hookeri on the market. None have the long flowering season of ‘Zorami’ but they are still of interest for a sunny position.

In 1997, I embarked on the Snowman Trek, in Bhutan. This is one of the toughest treks in the world , as takes you across 11 5,000m altitude passes. The scenery is simply breathtaking and the villages and forest on the way are pristine. My first experience of Allium wallichii in the wild was in some of the lower altitude forests on this trek. Deep in these primeval forests, the Allium wallichii grew in quite shady spots and flowered with deep purple drumsticks. On this occasion I didn’t have any reason to understand its edibility, but it was obviously a subject for adding a splash of colour to a shady position.  It wasn't until my trip to Manipur, many years later on the summit of Khiang Phung (2800m altitude) that its use as an edible plant came to my notice. The village porters went out and collected the roots of Allium wallichii at camp and used them to make a sauce for the venison they had shot on the trip up the mountain. 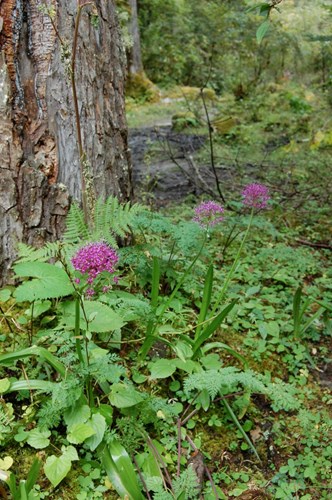 There are a number of different forms of Allium wallichii available. One I don’t grow, but I have seen offers it the deep purple (almost black ) flowered form. It might be interesting, but hard to see in a shady position. The bright purple form is probably a better as a garden plant.

The leaves as well as the roots are eaten. The plant is often late to appear, as they are just coming through the pots now in the nursery as I write this (mid-June).  The bulbs can boiled and fried in ghee as treatment for dysentery. They are also said to be good for altitude sickness.

One interesting use is to plant them to repel moles. I haven’t tried this but it might come in handy!

There are three species of Allium that come to mind, under the name of Garlic Chives; Allium ramosum, Allium chinensis and, most commonly, Allium tuberosum. On a trip to Guizhou, China in 2012, I noticed a number of Alliums being sold in the market looking like spring onions (A. fistulosum). It later proved that these were in fact Allium chinensis. I had never seen these being grown in the UK. It seemed that this was the Garlic Chive of choice for this part of China. I again found them growing in Nagaland a couple of years later. Here the villagers used to hang them under their eaves, in bunches. This helped to preserve them over the winter, for eating and replanting. In Japan it is used to make a delicious pickle. 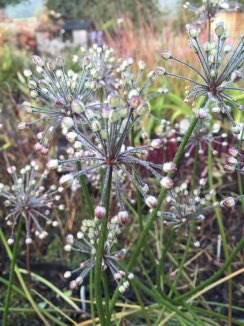 As well as being useful as perennial spring onions, they flower in the autumn. This adds a real splash of colour later in the season, usually in late September-October. They are very easy to grow in a sunny position. The leaves are also useful for winter use as well. They persist through the winter and can be cut like chives. 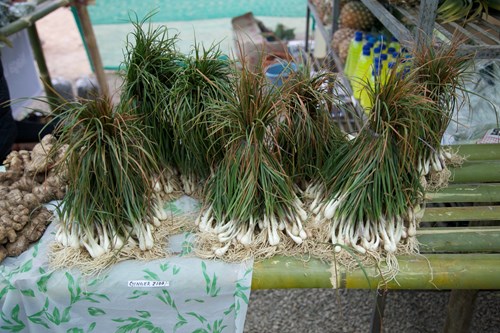 The three species above are all very well behaved garden plants that deserve to be more widely grown. All being edible and ornamental!

Paul Barney owns Edulis Nursery, based in Ashampstead in Berkshire. The nursery grows a wide range of edible and ornamental plants, including collections from plant hunting trips in places like Chile, India, Ethiopia, Vietnam and China.

Article and photos copyright the author.