Paula Keeble, from Acantha Cacti, who are new to Rare Plant Fairs this year, describes this fascinating genus of succulents. - 15 May 2015

When I moved to a house with a large garden I was looking for plants to fill the blank canvas I was faced with.  I didn’t realise then that a chance discovery of an Agave americana marginata (variegated century plant) at a bootsale 10 years ago would spark a love of this fascinating genus and other wonderfully spikey plants.  I still have this plant and l think it will always be my favourite from my personal collection.

Agaves are perennial, drought tolerant succulents mostly originating from the Americas. A diverse genus of plant with a distinctive rosette forming habit, the larger species such as Agave americana becoming so large in time they can easily be used as a structural living sculpture others such as Agave schidigera ‘Black Widow’ are very slow growing and compact which will grow happily in pots in greenhouses or on a windowsill.

Agave offer a wide variation in leaf shape.  A few examples are Agave americana which has thick succulent leaves with a spiny margin and large terminal spines which can be 5cm in length and very very sharp, whilst Agave stricta has stiff narrow leaves ending in a needle sharp terminal spine.  Cultivars such as Agave schidigera ‘Black Widow’ and Agave x leopoldii ‘Hammer Time’ have white to silver threads on the margins of their leaves.   Then there are the more unusual ones like Agave gentryi ‘Jaws’ which is heavily spined, toothed may be a better word considering the name, and when mature has the appearance of a shark’s mouth |(hence the name); and Agave salmiana ‘Mr Ripple’ that has leaves that undulate giving the appearance of rippling leaves. 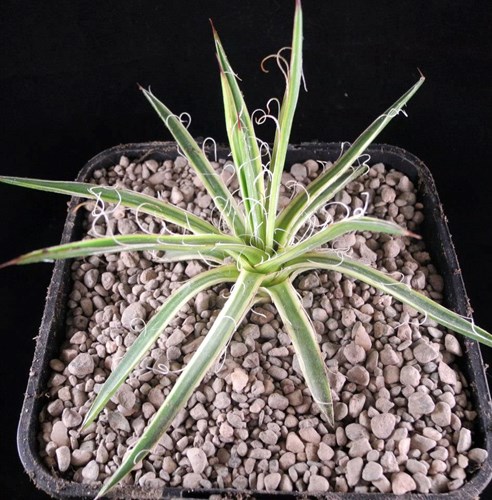 Agaves reproduce by seed and by offsets.  New rosettes usually grow at the base of the parent plant forming their own root system.  Once a root system is established it is easy to remove from the parent plant and repot as an independent plant.  In my experience, if offsets are removed from the parent before the root system is established given time and a bit of luck they will form roots.  Although Agave do flower to produce seed, the majority of the species are monocarpic in nature and it is believed that the plant expends so much energy producing the flower stalk (which can reach beyond the size of an average man) that they die after flowering.  In the wild flowers are pollinated by bats, moths and hummingbirds.  I have yet to see one of my larger specimen plants flower, some are over 30 years old.  This is a double edged sword as I would love to see them flower but on the other hand I don’t want them to die off either.  The seeds of all Agave are black and flat varying slightly in size and all looking very similar.  Don’t drop them on the floor as I once did as you will never tell them apart! 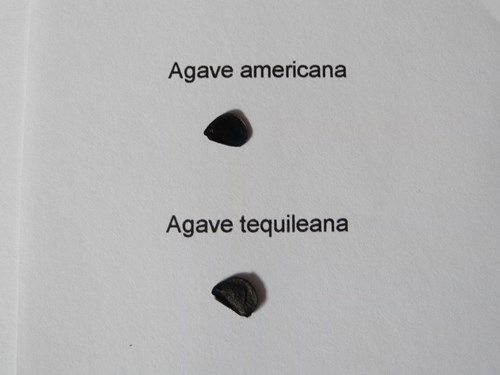 There are some unusual looking species too like Agave x Manfreda ‘Bloodspot’. This cultivar is believed to have originated in Japan as a cross between Agave macroacantha and Manfreda maculosa, ‘Bloodspot’ is a visually stunning plant with bluish-green leaves that have cranberry coloured spots and maroon leaf edges that end with a small terminal spine.  It usually occurs as a solitary rosette as these plants rarely produce offsets but I do have one that has produced three so far. 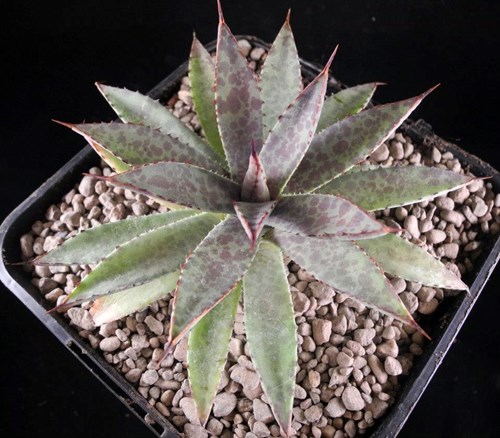 Agave are an easy genus to care for and thrive on a little neglect, usually forgiving if they are left un-watered whilst their owners are on holiday.  Most species prefer a full sun position with their roots in a well-drained preferably gritty/sandy soil or compost.  If they are in pots they should be re-potted every few years to replenish nutrients that have been used or washed away with watering.  Agave should be watered about once a week during the summer months if they require it, if the soil is still damp leave them for a little longer.  During winter they should not be watered at all.

Agave is also well known in another form…tequila!  This is an alcoholic drink made from Agave tequilana (Blue Agave or Agave azul).  Mature plants of around eight to ten years are harvested and go through fermentation and distillation processes to produce the various types of tequila on the market.  The myth that tequila has a worm in it originates from a group of drinks called Mezcal also made from Agave.  Mezcal is made from any type of Agave where by law tequila is only made from Agave tequilana.  The worm in question is a maguey worm.  Tequila does not have a worm but several brands of mezcal do as apparently it gives flavour to the drink.

So, in conclusion, Agave are a wonderfully diverse and distinctive genus of plant in size, shape and even colour, easy to look after and if you fancied a drink it will make you merry too!

Paula opened Acantha Cacti in 2013 and specialises in agaves, but also sells a wider range of cacti and succulent plants, seeds, books and general sundries.