Gordon Link, from The Gobbett Nursery, with a selection of the best flowering dogwoods. - 29 May 2016

Although there are up to sixty different Cornus species, I am going to concentrate on just three, Cornus florida, C. Nuttallii and C. Kousa. These three species are the ones usually recognisable in late spring and early summer with their large white bracts that are sometimes followed by bright red fruit. The first to flower is Cornus nuttallii which usually starts in early April. This species is a native of Western North America where it can grow up to twenty five feet, but in the U.K it is usually much smaller. We have found it to be quite a slow grower, so if space is limited this is a species to bear in mind.  Like other flowering dogwoods, they require a moisture retentive soil somewhere between acid to neutral. Being woodland plants they will grow in quite a bit of shade, but perhaps flower better in full sun in the U.K Blooms tend to have six showy bracts surrounded what is actually the flower.  Depending on variety, bracts can be up to eight inches across.  Autumn leaf colour can range from red to orange the best being after a warm dry spell. Bright red fruits are sometimes set, but require a good summer in the U.K.   We have only grown a handful of Cornus nuttallii varieties, but have found ‘Portlemouth’ and ‘Monarch’ to be two good varieties. 'Portlemouth' has a more upright habit whilst 'Monarch' is more spreading. 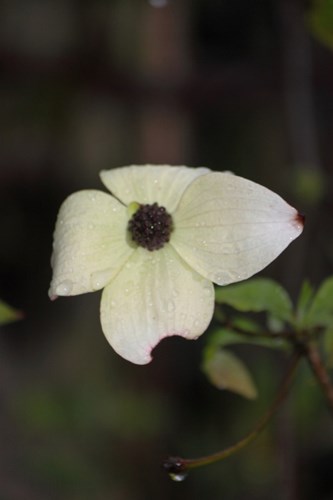 The next species to flower is Cornus florida which is another North American species, but is found on the eastern side of the States. There are literally hundreds of varieties grown in the U.S.A. The true species again has large white bracts, but varieties with pink and red bracts are also available. Interestingly you can also get varieties which are variegated for extra interest when not in flower. Generally variegated forms are slower to get going, so if you want something smaller maybe they could be for you. Varieties include ‘Spring Song’ with pink bracts; ‘Sweetwater Red’ with even deeper bracts; and  ‘Cherokee Chief’ with rose pink bracts. ‘Cherokee Sunset’ has deep pink bracts and the leaves have a pink & white variegation; ‘Cloud 9’ has white bracts and is quite a strong grower; and  ‘Appleblossom’ has tiny white bracts. 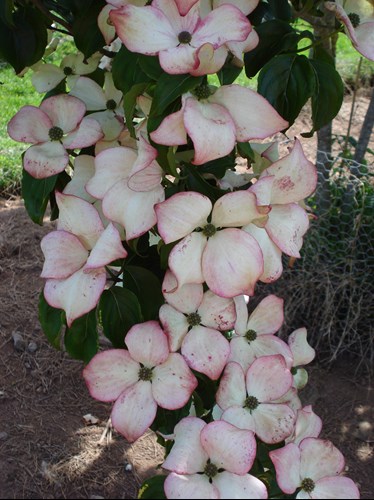 Cornus kousa and cultivars are usually the last to flower from about mid May to the end of June. They tend to be the most vigorous and easiest to grow in the U.K.  Native of much of the Far East, they seem more suited to our maritime climate, usually growing to about three metres in ten years and a good grafted cultivar can start flowering almost straight away. Bracts are usually vivid white, but often start off a small and green, then gradually as they open they turn white. Again, however, you can also get pink flowered varieties.  Good cultivars include ‘Big Apple’ which has large white bracts often followed by large red fruits; ‘Bodnant’, another good white bracted variety that we find often the last to flower; and ‘Galilean’ with large pointed tipped bracts and large green leaves. ’Greensleaves’ is very vigorous, with bracts thathave a green tinge to them. ’Southern Cross’ is a New Zealand introduction which has a more shrubby growth pattern. The bracts slowly turn pink with age.

An old favourite which is still a fantastic variety is ‘Satomi’ with pink bracts absolutely beautiful. Another good pink variety is ‘Radiant Rose’ which is a somewhat paler pink. My personal favourite is ‘Heart Throb’; this has the deepest pink bracts of any C. kousa we have yet tried on the nursery.  A good variegated form is ‘Gold Star’ having a bold yellow central star on a green leaf. 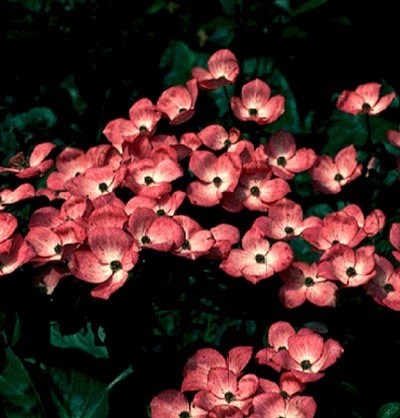 There are also some excellent hybrid varieties available. Cornus ‘Norman Haddon’ is a cross between C. kousa and an evergreen species Cornus capitata, which is an evergreen cornus, not completely hardy but here has survived -16C. Crossed with Cornus kousa it has produced some fantastic semi evergreen varieties such as ‘Porlock’ and ‘Lady Gloria Birkett’. They are all fairly similar, having masses of white bracts gradually turning pink, followed in summer by red fruits. In the autumn the leaves turn various shades of red and orange. They tend to be fairly compact slow growers, so are good if space is limited. 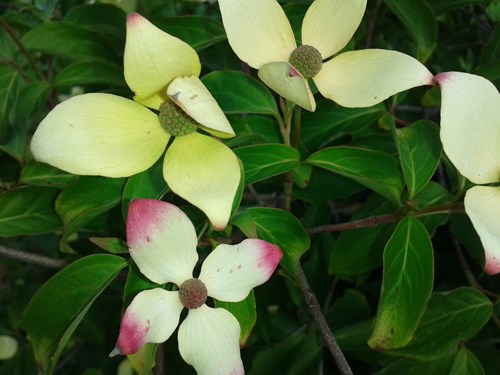