Rob Cole, from Meadow Farm Garden and Nursery, with some fascinating insights into the development of new Echinacea cultivars. - 21 July 2017

Thumbing through plant catalogues is a favourite pastime of mine, and a lot can be learnt about availability and the differences between cultivars of the same genus.

We have always grown the Coneflower, Echinacea purpurea, in the garden, together with a few of its cultivars, but with the advent of the orange Echinacea 'Art's Pride' in 2004, a distinct colour break from the normal pinks and majentas, my interest in them began to grow.  I started to look through catalogues, old books, the Plant Finder, and the internet to try to find and record as many of the species and varieties that I could, and was amazed to end up at the end of 2004 with a database of 75 entries.  My database now lists a startling 374 varieties reflecting the surge of interest in hybridising.  Some of the earlier cultivars are now unavailable commercially, but the list is a fascinating record of the work of nurserymen seeking to raise new plants. 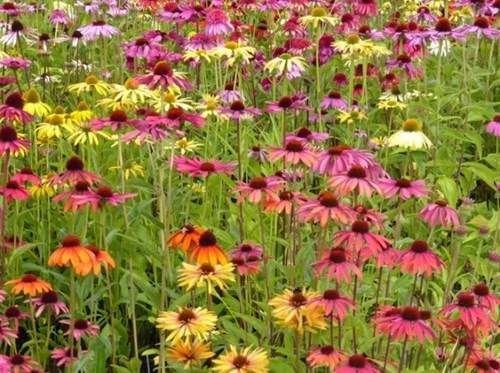 Echinacea purpurea, the Purple Coneflower, is the principal species and is a native of Virginia, west to Ohio, Michigan, Illinois, and Iowa, and south to Georgia and Louisiana and grows in prairies and dry, open woods.  The daisy flowers are a pinkish red, and the petals droop around a central cone.  It is attractive enough, although I always think that the drooping petals make it look as though it is wilting and sad.  Other species I have encountered in my ramblings are angustifolia, pallida, paradoxa, sanguinea, simulata, and tennesseensis.

Hybrids between the various species of Echinacea were relatively unknown, but in 1997 the Chicago Botanic Garden under the guidance of Dr Jim Ault, began to experiment by controlled crossings. Coneflowers have proved to be very promiscuous, and many of the hybrids are in turn fertile, which makes the potential for combining characteristics almost limitless.  The species used were E. purpurea (in both pink and white forms), E. angustifolia, E. paradoxa, and E. tennesseensis. 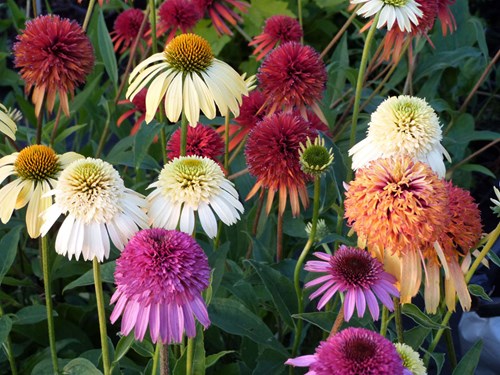 The first hybrid to be released to gardeners was Echinacea 'Art's Pride' in 2004, an Echinacea purpurea 'Alba' x Echinacea paradoxa cross, with bright orange flowers, and named after the financial benefactor, Art Nolan, who made the breeding research possible.  The press releases all described it as a vigorous plant, but nearly every purchaser found this was not the case and quickly lost their plants. The press releases also said that it did not set seed, but I collected and sowed viable seed in 2005, and a few of the resulting 88 seedlings were selected as being good reds or oranges and were potted up to see how they fared.  The remainder were mostly sent to the compost heap. 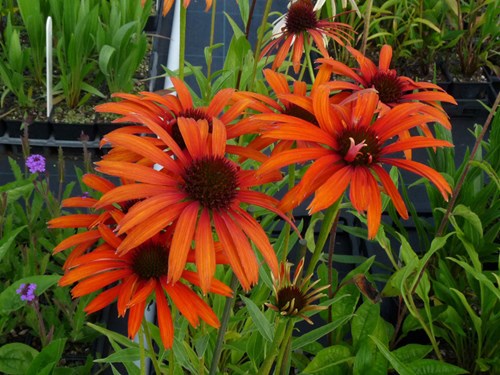 Seed from the selected potted plants was collected the following year, and so began my attempts at raising better and better colours and more vigorous long-living plants.  Since the original 2005 sowing, I have raised 12,844 seedlings and selected 684 (about 5%) as worthy of growing on to assess further. 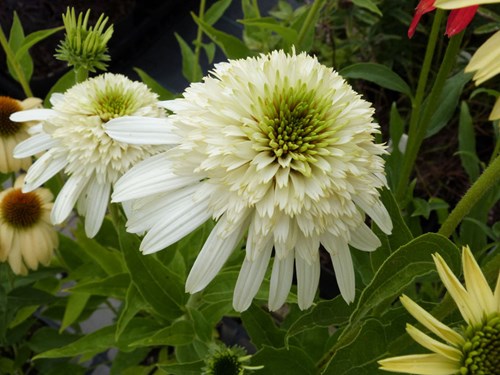 Just over 400 of these have since been discarded or lost, but in Spring 2012, a hundred of the better ones were lined out in a trial bed on the nursery to explore how they would grow in a 'garden situation'.  Most have done remarkably well, especially during the hot spell in July 2013 when the ground cracked due to the drought, but not one plant even wilted.  About 60% have survived the five years since planting, and once I have established the best, I will start to propagate them by division.  Introducing new plants is a lengthy process! 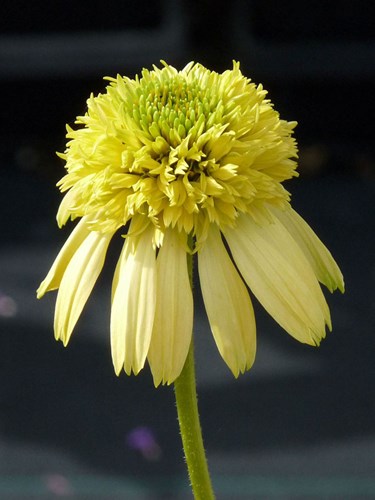 Echinacea is an invaluable addition to the garden for summer and autumn colour.  With us, they begin to flower in early July, and go on flowering until October, especially if they are deadheaded.  They require a reasonable soil (why do all gardeners think their soil is awful?) and an open position is best, although we have found them to be also amenable to a bit of shade for part of the day. 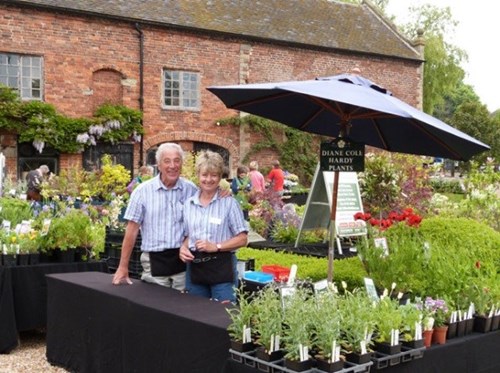