Charlie Pridham, from Roseland House Nursery, on these colourful and spectacular climbers - 10 April 2016

Sometimes known as Josephine's Bell Flower, Lapageria rosea was first described for science in 1804 and named after Napolean Bonapart's wife, Tascher de la Pagerie being her maiden name. In some ways a shame as its Indian name in its native Chile is Copihue (pronounced - Cop ee way) which would have been a good choice. Originally classified as part of the Lily family it has now been placed in the Philesiaceae. Kew had received a plant by the 1830's but they were not available in the nursery trade until the 1840's after William Lobb (a Cornish man local to me) was sent out to collect seed; he came back with many other plants including Monkey Puzzle tree seeds. All these treasures were being sold by 1849 by the Veitch nursery and Lapageria became very popular, even having special glass houses built to accommodate them. The cultivar 'Nash Court' dates back to the 1880's and is now the sole survivor in the UK from that period; in truth this is little different from any seedling plant. 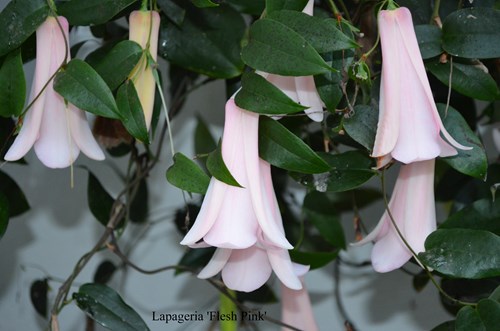 In Chile there are many lovely selections but here in the UK we had to wait until the 1950's before someone selected any good named forms; that someone was Rennie Moffat, who he was the head gardener and nursery manager at Penheale, in Cornwall; he supplied various outlets included RHS Wisley. He introduced two plants which, in my opinion, are the best of their colour group, 'Flesh Pink', as the name implies a good pink, and 'Beatrix Anderson' a deep red. But any seedling will be a thing of great beauty once it settles down to flower. 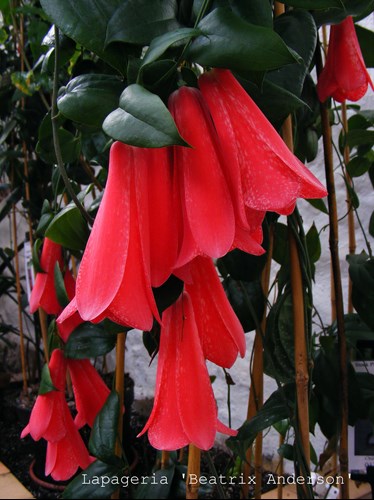 An evergreen climbing plant that flowers for up to nine months of the year with large colourful flowers, tolerates, indeed prefers, shade and cool conditions, so why are they not in every garden? Although tolerant of temperatures down to around -8C without damage means that, although not strictly hardy, they are not too tender either. As they flower during the colder half of the year (typically September to April) they do like a bit of protection from the worst of the winter weather, so a wall is of great benefit, even open porches, verandas, or car ports. Given this modest shelter will greatly increase both the flower quantity and length of flowering. The one thing I have noticed over the years is they love good ventilation, they don't mind how wet it gets but must have good drainage. 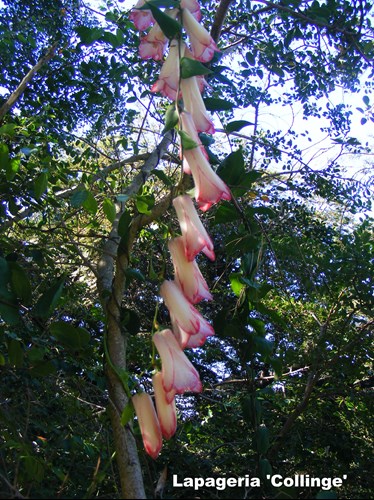 So what's the problem? Well, the truth is that if you understand the plant and its ways there isn't really a problem, but you do need to understand what it doesn't like, the most obvious of these being its dislike of lime in the soil, it prefers a woodsy soil with good drainage and PH of 6.5 or lower. In pots I find a good bagged Ericaceous compost with crushed bark added gives good results. The evergreen leaves last a long time on the plant (several years) so any damage to them will be with you for years, small snails living among the foliage are the worse problem I face on the outdoor plants as although the plant grows and flowers OK it looks tatty due to this leaf damage. I control these with liquid slug killer sprayed up under the leaves. Lapageria don't like it hot so if in a sunny position will require some shade during summer. But none of these problems really accounts for their scarcity in UK gardens. I think the main reason stems from how hard they are to both to propagate and grow on as small young plants. Most gardeners (and I am no exception) when faced with a plant they want at a price they don't want to pay will try either to grow from seed or source a cheaper (smaller) plant. 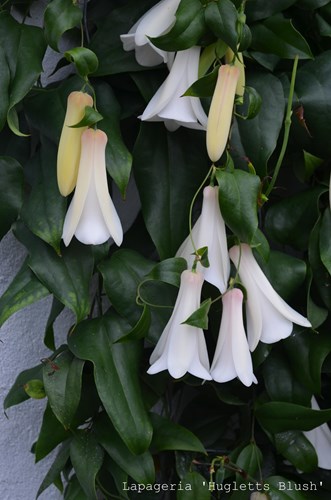 Unfortunately with Lapageria unless seed is fresh germination is poor and erratic, seedlings are also very slow to get going, often sitting for a year before going beyond the seed leaf stage, many are lost to impatience and it will be 3 years before the plant has a chance of producing its first flowers, the plants at this stage are still too small to be safely planted outside and a further 2 years of growing on are recommended. All this means a lot of failures and many gardeners give them up as being too difficult, the truth is older better established plants are not that tricky, but any plant that takes 3 -5 years to produce with a high loss rate along the way is bound to be more expensive - sorry that's just the way it is! The good news is planted in the right spot it will outlive the person who planted it and will become a large spectacular climber. 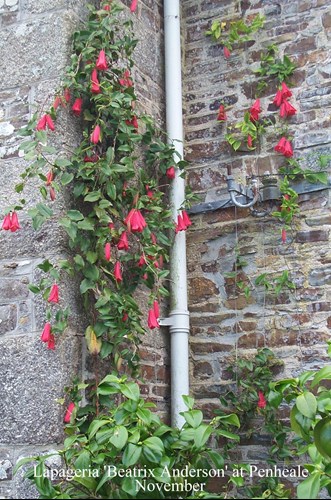 Charlie Pridham and his wife Liz run Roseland House Nursery, a nursery that specializes in growing climbing plants and who are holders of National Collections of both Lapageria and Clematis viticella cultivars.