In the second part of her series, Kim Hurst, from The Cottage Herbery, offers more examples of the wonderful scents that you can bring to your garden through plants with aromatic leaves. - 27 May 2018

Which plants to crush a leaf of this time? Well, I did ponder for a while finding it a hard choice but then working with some of the plants on the nursery recently my choices came from the enticing scents of firstly Anise Hyssop also known as Giant Hyssop and Liquorice mint. Agastache foeniculum is bothstriking and a highly aromatic perennial herb, that attracts bees, butterflies and Humming birds (the later not much seen here on the border shires!)

However, in its native North America, where it grows wild on the prairies and plains, pollination is achieved by these diminutive birds and other beneficial passing insects. It grows in abundance creating great swathes of vertical textural flower spikes. The scent is reminiscent of those almost impenetrable ‘sweet shop’ aniseed balls, hence the folk name of liquorice mint. Its mint association comes from its family Lamiaceae.

It can be grown from seed or cuttings liking some warmth to kick start both. Ideally planting out into well drained rich soil in full sun, It loathes wet ‘glaggy’ soil, as it has a tendency to rot off at the base. It comes in white too, which is coveted by the new movement of naturalistic florists. The cultivar Agastache ‘Alabaster’ sports a creamy white flower spike with mid-green foliage. A particular favourite that we grow for the herbaceous border is A. ‘Black Adder’ a sterile form that has interesting deep purple colouration on the reverse side of the leaves and with an intense aroma of anise. It flowers from July to early October purple in bud opening to a deep lilac and stands a metre tall. 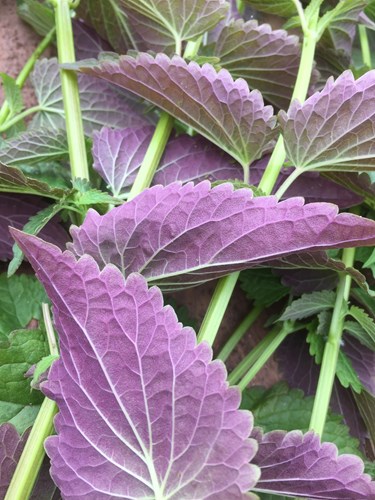 If vibrant colours are your want then you can’t go far wrong with choosing Agastache aurantica ‘Apricot Sprite’ from Mexico, with deliciously aromatic, dazzlingly bright apricot/orange multiple two lipped tubular flowers that continually flower throughout the Summer into the Autumn. But this is a tender perennial, one whiff of frost and it’s goodnight Senorita! This is one for a pot, placed in full sun so it can be enjoyed close to hand to crush a leaf while sipping your Margarita! 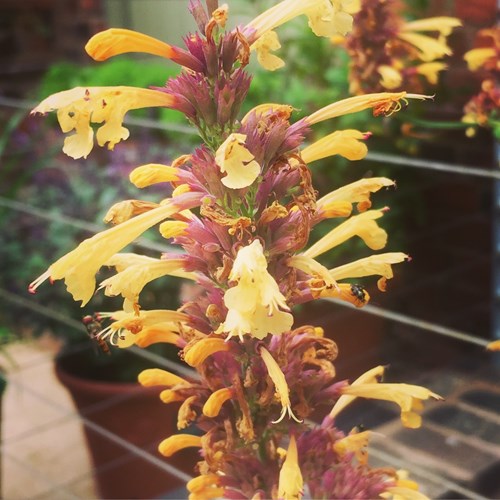 One of the most daily used aromatics is the perennial herb Oregano Origanum vulgare, often called Wild Marjoram. Used world wide in so many different cuisines. Its aroma is very distinctive, pungent, warming and evocative, especially when it has been warmed by the sun. Memories of a Greek olive grove, Italian hillside or maybe it was France? Which gives the clues to how it thrives best full sun, well drained and moderately fertile alkaline soil.

The edible flowers are nectar rich and abundant. Cut back after flowering to keep the plants compact. Can be grown from seed, cuttings and division all done in the Spring. 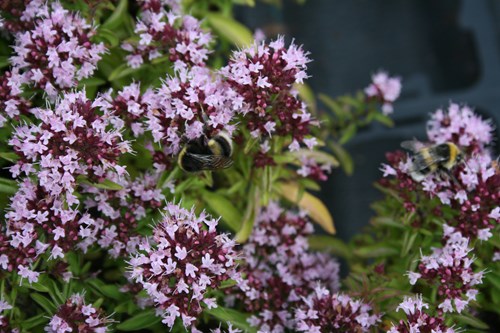 The Origanums which we consider are both useful and attractive being O. vulgare ‘Country Cream’, the green & cream variegated form; O. vulgare ‘Acorn Bank’ with golden yellow, oval pointed leaves followed by clusters of tiny pale pink flowers; O. vulgare ‘Compactum’probably our favourite with a really compact habit with the most beautiful 50p piece sized pink flowers in late summer always covered in butterflies. Others include Origanum vulgare subsp. hirtum ‘Greek’ (Greek Oregano), strongly aromatic and topped off with delicate white flowers again in clusters. There are more but one that needs to be included in this list because of it’s specific aroma is the Middle Eastern Oregano Origanum syriacum used in ‘Z’Attar’ Oval grey/green slightly hairy leaves followed by white flowers. Strongly aromatic and omits distinctive warm spicy aroma, delicious. However, it is not happy with us in cold, dank dark winters it needs warmth and light, we struggle to get it through winter, so always make sure that we have a full tray of cuttings come September! 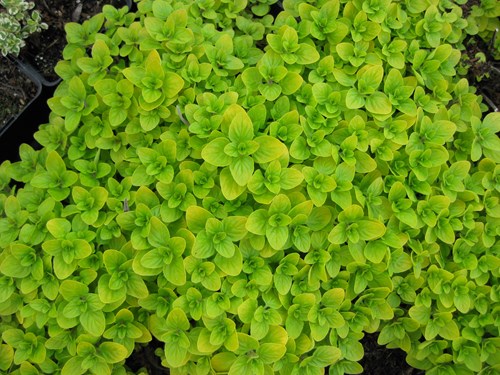 Chamomile is the next choice starting with Chamaemelum nobile ‘Flore Pleno’, Double flowered Chamomile. It produces a tight carpet of apple scented fine ferny deep green leaves, bearing pendulous double creamy white aromatic pompom flowers, such a pleasing combination. This one for seating areas, to gently crush with your bare feet, its effect is cooling and soothing. Peel back a potted plant and you have a multitude of tiny roots which enables the plant to creep and carpet edges of paths, tops of walls and pots. The plant of this Chamomile and that of Lawn Chamomile (Chamaemelum nobile ‘Treneague’),when gently teased apart, will naturally form individual plantlets that can be popped into modular trays to grow roots before potting on. This is the easiest way to grow your own Chamomile Lawn, which is the ultimate aromatic plant experience. Both are perennial forms of the genus; the annual chamomile Matricaria chamomilla  syn. Matricaria recutita know for its excellent tea properties has a wild growth habit, is tall and better grown more as a cropping plant along with your salad crops.

This leaves our personal favourite to last ……… Lemon Verbena Aloysia citriodora (syn. Lippia citriodora) of the family Verbanaceae. This is a highly aromatic deciduous shrub, native to Chile and Peru. It came to Europe in the seventeenth century via the Spanish who cultivated it for it’s perfumed natural oil.

The scent when you crush the leaf of Lemon Verbena its an olfactory overload incredibly lemon zesty, think lemon sherbet dab! A very tactile plant its hard to resist reaching to crush a leaf. While the flowers are often classed as quite incidental these panicles of tiny delicate white flowers typical of the Verbenaceae family have a highly intensive perfume all of their own and are still gathered and used in the making of high end perfumes. 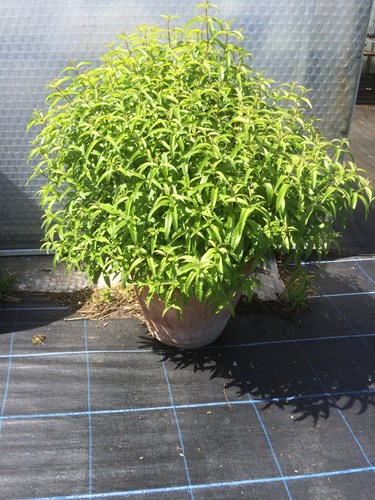 Growing Lemon Verbena isn’t as hard as some make out there are just a few nuances to follow. Keep young plants in pots for the first couple of years, erring on the dry side through the winter months. Then, plant out when the frosts have abated. Plant out making sure to choose a sheltered, well drained full sun position. Always cut back, after flowering. Leave trimming and shaping (if desired) when you see the first buds appear, usually in late Spring. 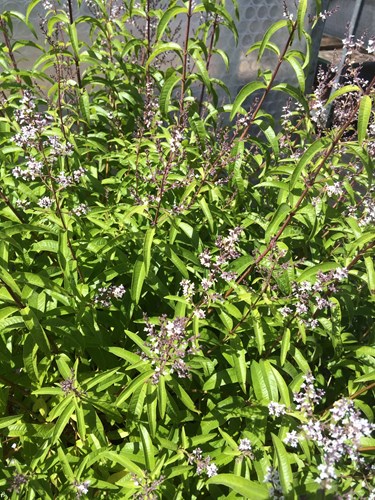 When next you’re thinking of a new planting scheme maybe consider adding a few choice aromatics to the mix, it will give you an extra sensory pleasure to be sure.