Monique Gudgeon, who owns and created the stunning gardens at Sculpture by the Lakes with her husband Simon, describes the journey to creating a new National Collection of Forsythia at the Gardens. - 14 June 2020

It all started at Samarés Manor Botanic Garden in June 2019. While visiting Jersey for an art exhibition and with a few short hours to kill we decided a tour of the famous botanic gardens was needed. As we wandered through the gardens, we pondered what qualified a garden as a botanic garden? On reaching home, further research led me to the Botanic Gardens Conservation International website where I discovered the following brief definition:

"A botanic garden is an institution holding documented collections of living plants for the purposes of scientific research, conservation, display and education." (Wyse Jackson 1999)

There was a very long way to go before we could conceivably apply such a label to ourselves at Sculpture by the Lakes, but it sparked our interest, and of course my horticultural aspirations.

One of the botanic garden criteria is to hold a recognised collection of botanically diverse, endangered and/or valuable plants. To this end I started to research what that could mean, applying directly to the Plant Heritage charity in the first instance. An invaluable source of information about their work, their website also lists endangered and 'missing' genera, which is where I ended up and where I discovered the long list of plant groups not currently held in any garden. That list includes so many well-known and much-loved genera - Abelia, Clarkia, Mimulus, Vinca, Tradescantia, Sequoia, to name but a handful, and while not everyone has the space for the National Collection of Sequoia (only one species though!) there are hundreds of suitable plants for even the most modest of gardens.

The decision was made - I would apply for National Collection status, but which one? I narrowed it down to half a dozen which would suit our location, climate, soil and aspect. I then further refined it to a manageable number of species within the genus and, most importantly, whether I actually liked the plant, which led to the final candidate - Forsythia. Again, I was most surprised to find it on the list as it was such a well-known plant, but maybe that's the problem for most of these better-known genera; everyone assumes someone else is taking care of them. 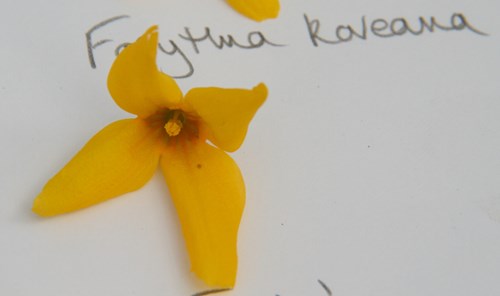 Plant Heritage agreed that I could make a preliminary application, and put me in touch with the Gardens Manager at Pershore College in Worcestershire, which used to hold the collection but which had lapsed a few years back. Luckily, they still had many of the species and cultivars I was looking for. A quick trip up the M5 in late July and I returned with a good haul of 37 species and cultivars. More calls and emails to nurseries, private gardens, RHS and botanic gardens resulted in another 25 crossed off the list. There were still 23 missing but I was definitely winning.

One of the fascinating, and exhausting, aspects of this exercise is the sheer amount of material available on the internet which helps guide me through the maze of the Forsythia genus plus its dozen or so attendant species. So many resources are out there that it is very easy to spend hours, days even, just following clues; reading research papers, contacting those nurseries and botanic gardens around the world which hold some of the lesser known species, downloading photographs, getting hold of books and articles, etc. Then to collate the various bits of information, trying to identify and then accurately classify species and cultivars, which are synonyms, which are misspellings, which are selling names; it is, as anyone who has started this knows, a seemingly endless task.

To date I have 36 different viable species or cultivars on the nursery, either as mature plants or rooted cuttings. Eight from the original Pershore collection failed, but hopefully I can take more later this year and I have more propagation material promised from various locations, bringing the total to 51. However, there are still many cultivars to find as well as seven species which are currently not available anywhere in the UK. Three are known at the Arnold Arboretum outside Boston, USA; the other four still require much detective work but most probably are only to be found in China, Japan or Korea, whether in the wild or in botanic gardens is yet to be established. Little is known about the current status of some of these and the IUCN Red List only has two species catalogued - Forsythia ovata, currently listed as endangered in its home range of south and north Korea, and Forsythia europaea which it lists as of least concern.

At the beginning of April 2020, we completed the creation of the six bed zones which will form the backbone of the collection and where we plan to start planting this autumn and winter. Countless tons of farmyard manure, our own homemade compost and a top layer of mulch was laid on a base of cardboard (to exclude light) following the 'no dig' method we use in the kitchen garden. Thus no need for herbicides, and we let the worms do the work to feed the soil, loosen compaction and generally improve the structure and health of the ground. 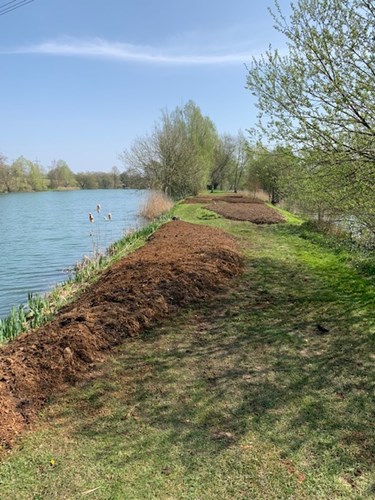 At the same time, I have started to study the mature plants that I now have in my possession, comparing growth type, flower size and colour (all yellow or shades of yellow), leaf shape, and variations on the theme. True, the real test will be once the plants are in the ground as pot growth is rarely an accurate reflection of what the plant will eventually become, but differences and habit are already obvious. 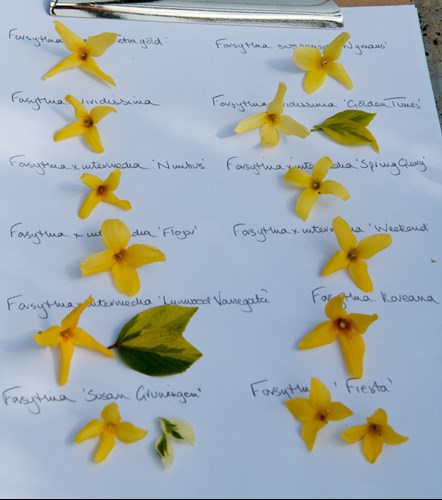 There are Forsythias of all shapes and sizes from tall 4m specimens down to prostrate groundcovering dwarf varieties, all needing to be noted, catalogued and understood to ensure correct positioning, and to ensure sufficient growing space once the collection is planted. Luckily they all require full sun and enjoy a well-drained soil - conditions which we happen to be able to provide.

What began as an idle thought while walking round a Jersey garden has turned into an obsession, and it's a slippery slope - once you get caught by the National Collection bug, you start looking around for other suitable subjects that need your attention. But the ultimate aim is still the same, to achieve a credible and valuable collection of plants, National Collection or otherwise, that will conserve an important resource, educate, and provide pleasure to visitors now and into the future. 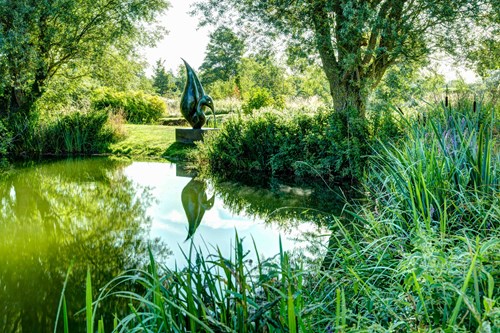 Sculpture by the Lakes reopened to visitors in early June; prebooking of tickets is essential, and full details are available at their website www.sculpturebythelakes.co.uk