Erysimum, formerly known as Cheirianthus, is a family of around 80 species of evergreen biennials and short-lived perennials that hail from Europe to North Africa, Central Asia and North America, suggesting that their predecessors occupied a large area of North Eurasia before the continent split 100 million years ago. They are members of the Brassica (cabbage) family. 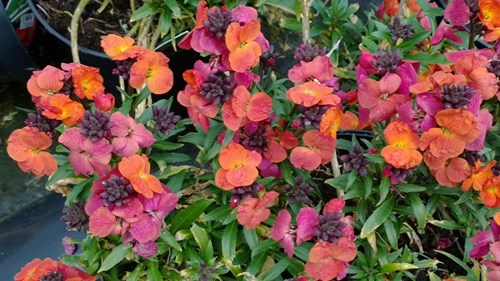 Most of us are familiar with the bedding plants, commonly known as wallflowers, which are planted out in the autumn and then flower around the same time as tulips, the following spring. They are used to good effect in both mixed borders and formal bedding schemes, prized for their bright colour range and warm, spicy scent. After flowering these plants are usually then discarded to make room for summer colour. If, however, you left them in situ they would likely live and flower for a couple more years; the reason we discard them is that they become large and straggly and very untidy.

Enter Erysimum, commonly referred to as ‘Perennial Wallflowers’. These forms have been selected and bred to have relatively neat, compact habits and are therefore left in situ to thrive and flower for several years. These hybrids are often sterile (meaning they don’t produce viable seed) which has the added benefit that the plants just flower and flower for months on end. Although we call them perennial wallflowers they usually become woody and lose some of their flower power by the end of their third or fourth season. It is the fact that they are so free flowering for such a long period that makes them very well worth the effort.

Happily, they are also very easy to propagate; semi-ripe stem tip cutting taken in spring or late summer will root easily in a gritty growing medium and act as a good insurance once parent plants run out of steam.

In the wild, Erysimum colonise habitats that range from Alpine scree, coastal sand dunes, volcanic slopes and Mediterranean scrub. In our gardens, they thrive best in full sun on well drained, nutrient poor soils with a neutral to alkaline pH reading, a point very well illustrated when you spy them living up to their name and growing out of walls pointed with lime mortar! They dislike cold wet soils and strong winds; as they are evergreen they get continually rocked in windy spots causing root disturbance – staking is an option in windy gardens.

Being members of the cabbage family, they suffer from much the same types of pest and disease; club root, downy mildew and flea beetle amongst them, but they are usually pretty trouble free. We recommend the following varieties:

‘Bowles Mauve’: This classic, long-flowering mauve form makes a rounded shrub 60cm x 60cm by its second season. It is longer lived that most but is sadly not scented. 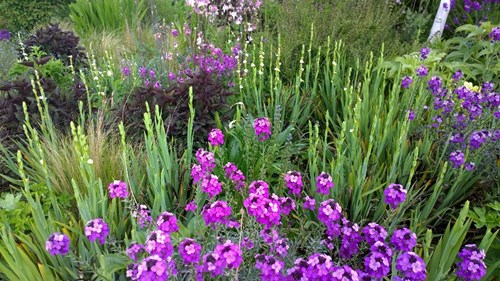 ‘Apricot Twist’: This has dusky purple buds that open to reveal scented orange flowers from mid spring. Pinch out the tips regularly to keep compact. 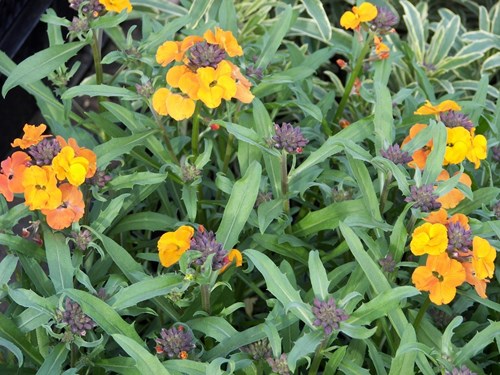 ‘Wenlock Beauty’: Having said Erysimum are generally short lived, a client of mine has a specimen of this variety that is over 10 years old and measures 2 metres x 1 metre in size. The flowers are a gorgeous mix of buff, pink and mauve. 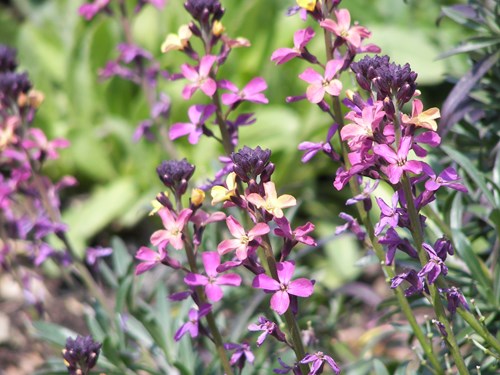 Winter Series: This is a collection of 7 different hybrids, bred in Germany for their tight clusters of flower that sit low above the foliage as opposed to strung out on long thin stems. These varieties can also start into flower as early as January if weather permits. ‘Winter Party’ is a riot of flowers that open gold, turning orange and then magenta as they age. 30cm x 40cm. ‘Winter Orchid’ makes a large, robust clump but needs a sheltered spot. Strongly scented flowers open coppery orange and turn purple later. ‘Winter Light’ has large, sweetly scented bright yellow flowers that pale as they age 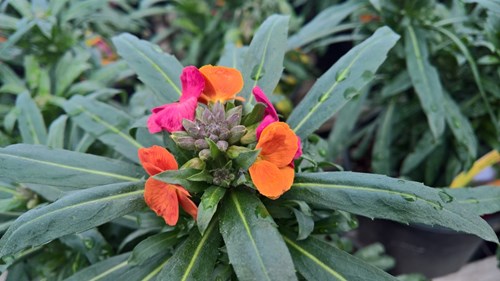 ‘Golden Jubilee’: This is a short, alpine type, only 15cm tall, with small deep green leaves and masses of pale yellow flowers from April – June. It is ideal for rockeries, growing in walls and for gravel gardens. 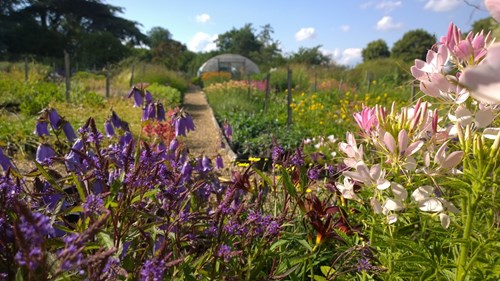 Article and all photos are copyright the author.