Late summer and autumn perennials, as well as providing us with a wonderful display of many vibrant colours, can be essential as a source of food for late flying butterflies and other insects especially for bees gathering nectar to see them through the winter. Here are some of my favourites:

Lysimachia clethroides from China and Japan (often known as Swans neck or Goose neck) has erect leafy stems topped with spikes of grey white flowers that are a magnet for butterflies. It  will grow in sun or shade and has good autumn colour as the stems and leaves turn orange and yellow with the cooler days. 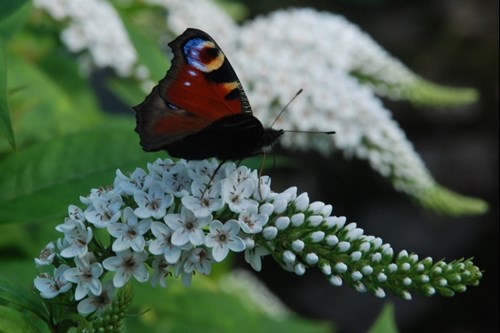 Thalictrum - many species to give interest and colour from spring to autumn. Thalictrum  delavayi from China is very good for late season flowers with attractive light airy foliage and purple or white flowers with  hanging stamens and is a good plant for shade but needs soil that is not too dry. 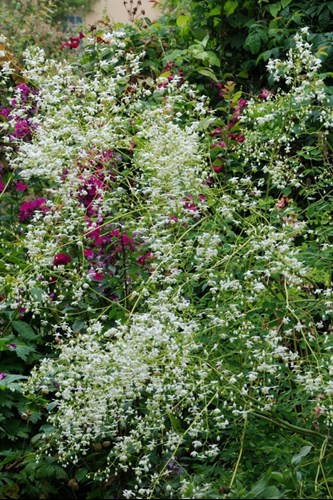 Asters are an obvious choice for the autumn border and their daisy like flowers are very attractive to bees and butterflies. Aster divaricatus from N. America is a useful species that will grow in shade. It was a favourite plant of Gertrude Jekyll with its wiry dark stems and a profusion of white starry flowers. Aster ‘Andenken an Alma Pötschke’ again from N. America is one of the showiest asters with its bright cerise pink flowers in September and October. 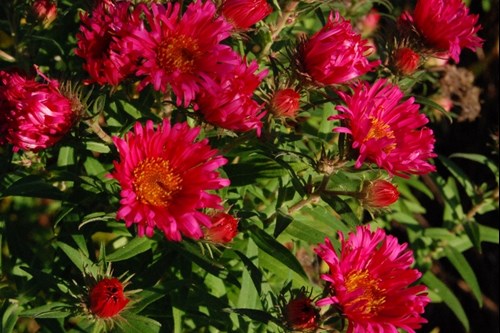 Aster laevis ‘Calliope’ is a good tall aster with very dark stems and masses of spode-blue flowers in autumn. 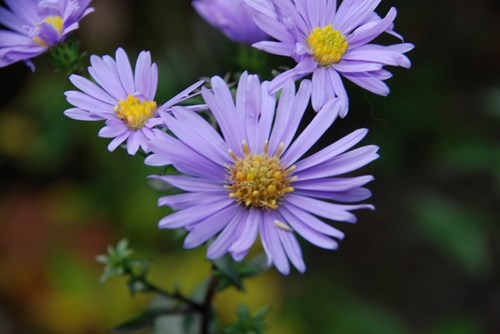 Persicaria amplexicaulis is an exceptional plant for attracting bees, a real buzz can usually be heard when passing this plant on a sunny day. It comes in a variety of colour forms from white to pale pink to deep red and makes thick weed suppressing clumps and is in flower for many weeks from June until the autumn.

Succisella inflexa is found in the wild in wet meadows in the Balkans, it will tolerate dryer areas in gardens but is best in semi-shade. The cultivar Succisella ‘Frosted Pearls’  has thin branching stems arising from tidy clumps of basal leaves carrying silver-grey round flower heads from mid-summer to autumn. It adds a light airiness to the border and is a great attraction for bees. 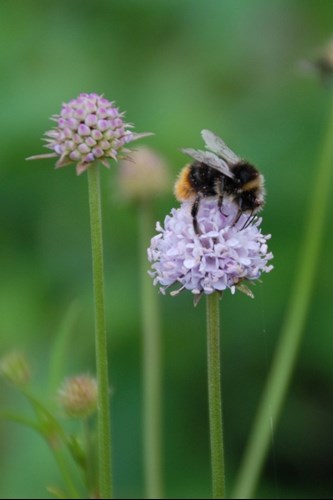 Verbena officinalis ‘Bampton’ - this form of a British native species was found growing in several gardens in Bampton, Devon. It has pointed heads of pinky purple flowers over dark purple foliage from mid summer until autumn. It needs full sun for the best foliage colour. 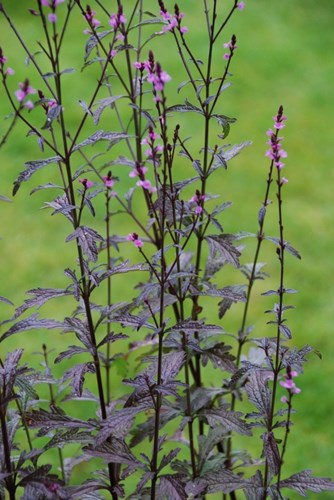 Hardy geraniums can also give late season interest both for the colour they provide and as a source of pollen and nectar. The many varieties of Geranium nodosum, originally from S. Europe, will give colour for months and are very useful plants for dry shade. Geranium nodosum ‘Blueberry Ice’ is a notable variety with rich, velvety purple flowers which have a white edge. The colour of its flowers is most vibrant in full shade but it will grow equally well in sun. Geranium ‘Elworthy Eyecatcher’, which was found as a seedling on our nursery, has one of the longest seasons of flowering of all the hardy geraniums . The magenta-pink flowers start in early June and go on right through to November. In some years it has flowered continuously up until Christmas. It has evergreen foliage and an added bonus is that the new leaves in the spring have a  cream variegation . No list of late flowering geraniums would  be complete without the ever popular Geranium ‘Rozanne’ with its large blue flowers with white centres. It was found as a seedling in a garden in Somerset. 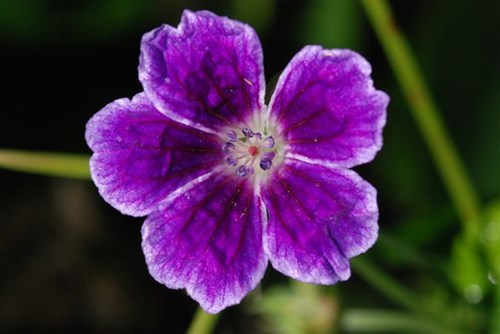 There are of course many other spectacular plants for Autumn colour such as phlox, crocosmias, rudbeckias and salvias. Autumn is also the season when ornamental grasses come into their own. Plant for Autumn and be rewarded with butterflies visiting your garden.

Jenny and Mike Spiller run Elworthy Cottage Plants from their home on the eastern end of Exmoor. It is a specialist nursery for herbaceous perennials, with some alpines, and there is also a one acre plantsman's garden which has been developed to blend sympathetically with the natural beauty of the surrounding countryside and to encourage wildlife.