Colin Roberts, Head Gardener at Adwell House, talks about his love for these fabulous perennials, and how they are used in the borders and containers in the gardens there. - 31 August 2015

I really don’t know when this romance began as I have been growing salvias for the last 25 years but since I have been at Adwell this romance has blossomed. I think I started with S. patens, growing them in containers with other tender perennials, S. p. ‘Cambridge Blue’ being one of my favourites. I have now built up a collection of nearly 40 different varieties growing in the gardens here at Adwell House. I am always asked the same question: ‘How hardy are they’ and the answer is that the majority survive the winter here in a not particularly sheltered garden in Oxfordshire. They also root so easily it is not difficult to over winter a few cuttings as an insurance, or even lift the plants and keep them in garage or shed until the worst of the frosts have passed.

Having said this, one of my favourites is the slightly tender S. leucantha ‘Purple Velvet’. It grows to about a metre in height and is covered in sprays of lavender ‘furry’ flowers set against the typical sage green leaves. I once grew this in a cold but frost free greenhouse and bloomed for virtually 12 months of the year, making bush easily a meter high and wide. Salvia involucrata is another really good plant and the variety ‘Joan’ has survived the last 4 or 5 winters. It grows to about 1.5 m and each stem topped with clusters of bright pink flowers and the plant is very upright and needs little or no staking. I prefer the species S. involucrata to either ‘Bethelii’ or ‘Boutin’; it is much more graceful with its arching stems and bright pink flowers along its length. 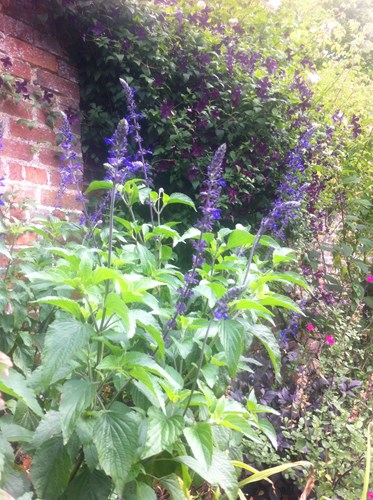 We all grow the culinary sage for its leaves to have with our roast pork but one I use in containers is S. elegans ‘Golden Delicious’ with beautiful golden, pineapple-scented leaves and bright red flowers late in the season. I plant it with Fuchsia ‘Koralle’ and S. ‘Royal Bumble’, with Begonia sutherlandii tumbling over the edge. 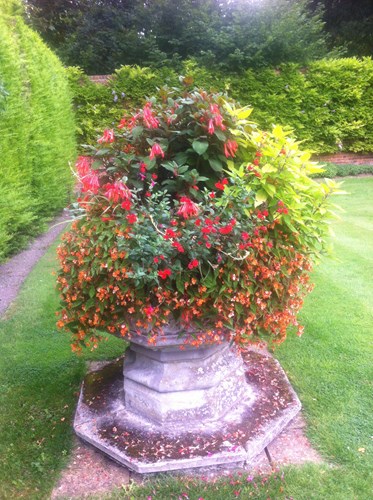 Other good plant associations with salvias are S. ‘Penny’s Smile’ with Geranium ‘Rozanne’; and S. ‘Dayglo’, a really bright pink with Dahlia ‘Twyning’s After Eight’. This dahlia has dark chocolate brown foliage with creamy white single flowers. Salvia ‘Nachvlinder’ has the darkest purple flowers which are a delight, but it needs to be planted carefully to show off these lovely blooms, as does S. ‘Javier’ with much paler flowers but so different from many of the others. 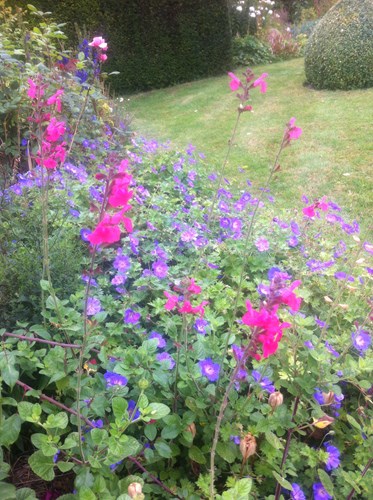 In the centre of our walled garden we have formal beds containing Rosa ‘Surrey’ which is quite a bright candy pink, and to calm this down we have also planted Lavandula ‘Hidcote’, Aster frikartii ‘Monch’ and the rich purple S. ‘Amistad’. This variety grows to about a metre, fairly upright and flowers all summer right up to the frosts. 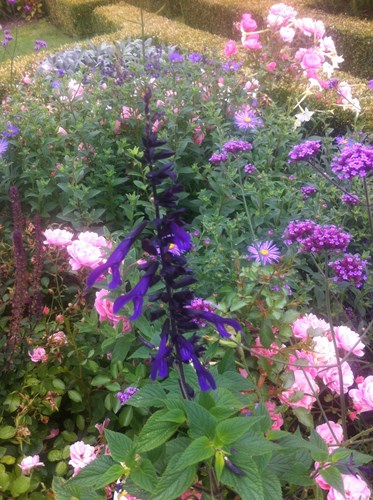 Another good upright variety for the back of the border is S. ‘Purple Majesty’ or the pale blue species S. uliginosa. Then there are the lovely microphylla group salvias, including the two tone pink ‘Icing Sugar’, the pale pink ‘Dyson's Joy’, the creamy yellow ‘Trellisick’ or ‘Melen’, and how could I miss out the red and white ‘Hot Lips’. I could go on and on; there is a salvia for most situations in the garden.

Colin will be selling plants propagated from the gardens at Adwell House, including salvias, at the Rare Plant Fair, in aid of Adwell Church.