Evenley Wood Garden: The Haven of Trees, Shrubs and Bulbs. 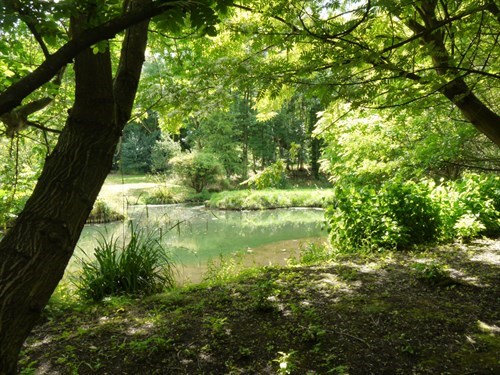 It doesn't matter if you are a tree lover, take a fancy to bulbs or if you are a keen gardener with a love for the natural environment. With our extensive collections of trees, shrubs and bulbs, Evenley Wood Garden is a place where you can learn something new throughout the seasons. With an aim to extend the collections of trees and shrubs, the team from Evenley Wood started a new project in the winter of 2014. The collections of Camellia, Euonymus, Rhododendron and Azaleas flowering in late spring and early summer will be supported by new planting. The comprehensive list of over 3.000 species of plants in the Garden will increase by at least 240 plants this year.

During the last 30 years, the garden has produced eight new plants, many of them being trees, such as Acer campestre 'Evenley Red'. The garden is constantly evolving organism, with new areas created to provide new vistas and surprises around the every corner for both the general public and professionals alike.

At the bottom of Timber Ride the team has cleared a large area that will be used for the development of a new rose collection, that will be inter planted with various Pear species. This part of the garden has a north facing aspect with predominantly alkaline, well-drained soil. The site takes advantage of the afternoon summer sun that will suit our new roses. The area was cleared of several large Poplars that surrounded the site, conifers that had been part of a plantation and some large sycamores and hazels that had been in the centre of the area and took up a large amount of light and space. After the removal of the unwanted trees the site, heavy machinery will be brought in to clear the remaining tree stumps and dig in extra organic material, such well-rotted manure. This will be allowed to settle for up to 12 weeks and give the new plants the best possible start. As these new roses begin to grow they will become a valuable addition to the Garden and add to our already extensive collection of roses and add even more summer interest to complement our lily collection.

Have you ever asked yourself the question why the British love gardens and why lots of keen gardeners are spread across the country? Why Britain ranked high in the 'Top Gardening Countries'? First of all it starts with tradition and history. It started in Roman times with enclosed areas in towns and flower beds in the villages. The Saxons were written into the garden history books because of their vineyards and orchards. Christian monks grew fruit and vegetables and all of us are familiar with the grass seats, roses and honeysuckle growing around Norman castles. The 16th century saw the development of forests and woodlands for hunting for sport and wooden pavilions covered with jasmine and roses, providing private areas for flirting and courtship in the evening.

Later on gardens became a space used for recreation and health benefits. Wild and cultivated roses were quite often used in the landscaping around spas, where residents enjoyed their scent while relaxing. The renaissance brought a huge continental impact on British gardens in terms of style and plant species. New bulbs came from Turkey, new trees from North America, China and east Europe. The gardens were designed in a modern and formal style. It was in the 18th century when Magnolias, Rhododendron, Azaleas and Camellias arrived to Britain. Around the 1860's each large family home had a wide border with climbing roses and meadows covered with hundreds of bulbs. William Robinson and his book The English Flower Garden published in 1883 took British gardens back to the natural and informal look. New tree and shrub species were coming in to Britain from Asia, especially from Japan and China. The National Garden Scheme started in 1927 and the BBC aired its first program on gardening in1934. Since then, we have seen the rise in the popularity of garden centres, container gardening, and the trend of creating garden spaces for conservation and the restoration of historic gardens, such as the Lost Gardens of Heligan.

The Project at Evenley Wood Garden has a simple aim, namely to show British history and tradition. Rose breeders have made great strides over the years, resulting in a wide range of plants being available to the public, ranging from Climbing Roses, Hybrid Teas, Miniature Roses and many more. Evenley Wood Garden has an extensive list of more than 170 roses that impress the visitor senses every year. Bringing extra colours to this 60 acre woodland garden will add an extra dimension to the natural environment. The current collection is a mixture of climbers, ramblers and shrub roses. These will be added by substantial collection dontated to Evenley Wood by Robert Mattock. The collection includes some rare species roses such as, R. andrewsii, R.blanda and R.suffalata, we will also be adding climbing roses to the collection such as R. cooperii, R. devonensis. The hybrids, such as R. x centifolia and R. x odorata 'Hume's Blush' will be added to our collection. Traditional rose gardens are very formal in their design with beds laid out in geometric patterns with climbing or standard roses in the middle with shrub or bush roses surrounding them. However, when the rose collection is added to Evenley Wood the planting will be in an informal layout, with species grouped together but without the formality of lines or defined borders.

Why do we want to maintain a collection of British Bred Roses? The collection of Rose species bred in Britain comprise of varieties that are generally available to the public and species that are either not widely available or in decline. This collection can be used as a source of genetic material for propagation for future generations and restoration projects. As an educational tool the collection can be used to show horticulture students various varieties of species roses and pruning and propagation techniques to maintain the collection. We anticipate taking in some students from Pershore College in Worcestershire this year, which will wider their experience and maintain the standards.

To celebrate the expansion of the rose collection, the Garden has organised the Lily and Rose Festival, combining both the highlights of the summer season. The event is planned for the 20th June 2015 and will include talks from experts, a plant & country craft market and obviously a spectacular show of flowering roses and lilies. So make sure that you make a date in your diary!